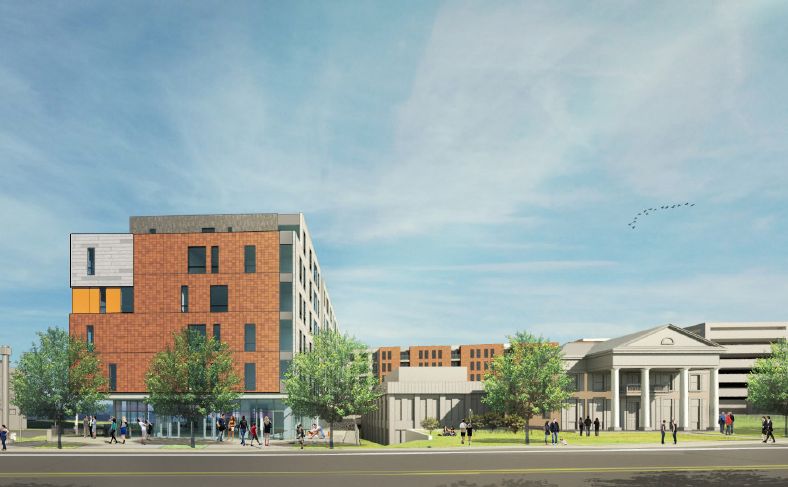 The developers of a proposed residential and commercial building at 1000 West Main Street returned to the Charlottesville Board of Architectural Review Tuesday with a smaller version of a plan approved by City Council in January.

“With further analysis into the market we found that smaller units, a smaller scale, and a less intensive critical mass was the direction that we needed to go,” said Dan Hrankowsy of CA Student Living.

City Council granted the Chicago-based company a special use permit to build a structure that would rise 12 stories high over Roosevelt Brown Boulevard, but they opted to build at a lower height and density.

The L-shaped building has been reduced in height to a total of 66 feet above West Main Street with six stories. The number of residences has been decreased from 246 units with a total of 644 bedrooms to 128 units with a maximum of 365 bedrooms.

The amount of parking spaces has also been lowered to 134. A rooftop pool has been moved to the lobby level.

“It’s not what it was before but they still need the special use permit,” said Mary Joy Scala, the city’s historic preservation planner.

A pedestrian terrace would parallel the Roosevelt Brown sidewalk and that road’s corner would be widened.

“The site is a very important site because coming from the south it’s a gateway,” said architect Scott Irving with the firm Erdy McHenry Architecture of Philadelphia. “What we want to do is activate the streets for the pedestrians.”

Irving said the architecture on the West Main side is intended to create a precinct that creates new public space to go along with a pocket park in front of the University of Virginia’s Core Laboratory.

The developer will not need to go before Council for further reviews unless one of the conditions of the special use permit is not met.

A representative of the University of Virginia reminded the developer that one of those conditions is to work closely to ensure impacts to the Medical Center are mitigated.

“We look forward to working collaboratively with the developer to ensure their project proceeds successfully and that our patient care mission can continue without issue,” said Kevin Fox, facilities administrator for the medical center.

He said that while the smaller building relives some of the university’s concerns, the developer must maintain traffic flow on 11th street during construction and not cause vibrations or airflow blockages that would impact the Core Laboratory.

“The Medical Center’s primary clinical lab operation is housed in the Core Laboratory building and it is a 24 hour, seven-day-a-week operation and houses some off of most sensitive diagnostic equipment,” Fox said.

The BAR granted a certificate of appropriateness for the project’s massing and scale.

“The work that you’ve done on Roosevelt Brown, however it ends up, is going to be one of those streets that we’re going to be able to take people to show that we’re moving towards a pretty cool vision for Charlottesville,” said Kurt Keesecker, a planning commissioner who also serves on the BAR.

The BAR also took up the topic of the 501 West Main Street, a Bill Atwood project to create a pair of two six-story buildings that would have retail space on both West Main Street and Commerce Streets.

The BAR approved the massing and scale of the Atlantic project in September and approved demolition of two buildings on Commerce Street in October.

They were asked Tuesday to approve the materials and design for the project, but Atwood deferred when it appeared the BAR would not grant approval.

The project’s scope has changed and will now feature residences where office space had been envisioned.

“We think the project as it has developed in cooperation with the neighborhood has become better than it was in the beginning,” Atwood said.

However, several neighbors were concerned about how the project treats Commerce Street.

“The project feels West Main-centric,” said Andrea Douglas, director of the Jefferson School African American Heritage Center. Douglas added that the two storefronts on Commerce Street looked cheaper compared to the ones on West Main Street, leading to an alley-way like feel.

Brad Worrell, a neighborhood resident, did not like that the bricks shown mimicked the bricks on the back side of the Century Link building.   He was also concerned that vehicular traffic will be doubled on Commerce Street

I think that the neighbors’ concerns remain regarding traffic,” Worrell said.

Some BAR members echoed Douglas concerns, and other were critical over the materials being used, and Atwood agreed to submit new drawings.

The BAR also approved an expanded patio for the Hampton Inn next to the Flats at West Village.

“Now that 9th Street is more activated this seems like a good way to reclaim this space,” said BAR member Justin Sarafin.