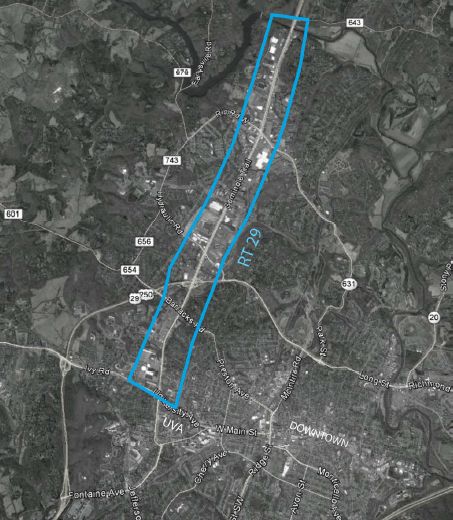 Subject area of UVa Vortex "29 North after the sprawl"

On Monday afternoon, 300 students from the University of Virginia’s School of Architecture will walk up and down the area’s busiest traffic corridor to begin imagining how it might be redeveloped in the near future.

The expedition along U.S. 29 will come near the start of the school’s third annual “vortex,” a week-long workshop in which students apply their design training to reimagine an aspect of the Charlottesville–Albemarle County area.

“The focus [this year] will be the Route 29 strip in Charlottesville, understood as a potential urban space,” said Manuel Bailo Esteve, an associate professor at UVa. “Not as a barrier, but as a connector between the two sides of the street.”

In 2012, the school’s vortex focused on the replacement of the Belmont Bridge. Last year, teams designed different ways the city and county might incorporate the Rivanna River into future development.

Bailo said this year’s workshop — which has the theme “29 North after the sprawl” — will give students and the community an opportunity to rethink the area between Ivy Road and the South Fork of the Rivanna River.

“Route 29 is an example of the contemporaneous American way of life based on the car,” Bailo wrote in material given to students in advance of the vortex. “The strip is surrounded and disconnected by the single-family house developments that wrap it.”

Students are being asked to challenge the “status quo” of the corridor and to imagine potential uses that are not currently seen along the highway.

“The buildings are located indifferently in their sites, with the parking lot as the core space that organizes each commercial cluster,” Bailo continued. “The strip is full of generic buildings unable to look at the others. It’s a place without urban complicities, a site empty of generous urban gestures.”

Each of 30 student teams will focus on a 1,500-foot section of the road. Each group also will develop a broad overview of how the entire subject area should be developed.

Spaces are to be reimagined to connect better to the overall environment. One question asked of the teams is to convert the space from one designed for vehicles moving 45 mph to one that would better suit people walking at 2 mph.

The public is invited to a kickoff discussion at Culbreth Theatre beginning at noon Monday. Panelists will include City Councilor Kathy Galvin; Jeff Werner of the Piedmont Environment Council; and Timothy Hulbert, president of the Charlottesville Regional Chamber of Commerce.

Hulbert has sent materials to organizers in hopes that business interests will be considered by the teams.

These include the results of a 2007 project commissioned by the North Charlottesville Business Council in which a School of Architecture team designed pedestrian improvements at key locations on 29, as well as a 2007 report from the Free Enterprise Forum called “Workforce 29” that concluded that 45 percent of Albemarle’s local tax revenue is generated along the corridor.

Projects are to be completed by Saturday. An unveiling and awards ceremony at Carver Recreation Center will be held at 11 a.m. Sunday.
The event comes at a time when the corridor is in transition, with many properties subject to future redevelopment and others the home of new construction.

For-sale signs are placed atop some properties, including the Days Inn just north of the interchange with the U.S. 250 Bypass. There are vacancies in retail complexes such as Seminole Square and Albemarle Square.

An engineer who works with local developer Great Eastern Management Co. said he is open to hearing the results, but is somewhat wary.

“We get a little worried when plans are applied to our property by groups with no financial or ownership interest,” said David Mitchell of Southern Classic.

Meanwhile, the Shops at Stonefield is preparing to move forward with construction of a second phase that will include a big-box retail store.

The project also comes at a time when the future of the Western Bypass of U.S. 29 is uncertain. The Albemarle Board of Supervisors now has a majority of members who support a fresh look at the 6.2-mile highway, which is currently awaiting permission from the federal government to either go forward or undergo further environmental review.

Data from the Virginia Department of Transportation indicate that about 56,000 vehicles travel through the intersection of U.S. 29 and Rio Road each day.

Belgian architect Xaveer de Geyter will be the “guest leader” of the week-long workshop.

De Geyter started his own firm in the early 1990s. Among the projects underway at his firm are a new administration building for the provincial government in Antwerp and a master plan for a section of Paris.