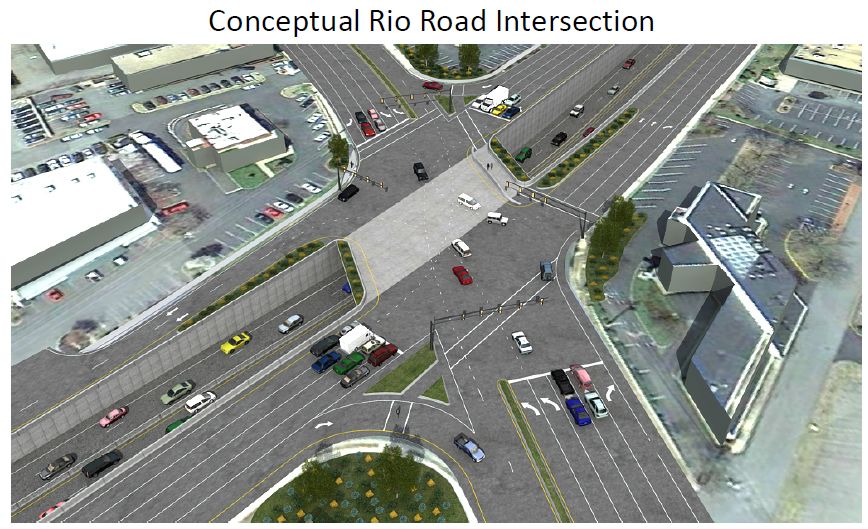 A $203 million package of solutions to ease traffic congestion on U.S. 29 through Albemarle and Charlottesville includes one new road, a grade-separated intersection at Rio Road, study of a similar facility at Hydraulic Road, and a down payment on a second daily Amtrak train.

Philip Shucet, a consultant hired to facilitate the ten-member Route 29 Advisory Panel, also said it is time to sell back the 87 properties VDOT purchased at a cost of $33.7 million to build the now-defunct Western Bypass.

“I think it’s time to suture the wound and get rid of this right-of-way,” Shucet said.

“That’s going to produce a lot of money that could perhaps be made available.”

Shucet, a former commissioner of the Virginia Department of Transportation, presided over the group’s final meeting Thursday. The panel was convened in March to recommend alternate uses of $200 million allocated to the bypass, a project whose future was called into question by the Federal Highway Administration.

Shucet detailed the various elements of the solutions that he will recommend to the Commonwealth Transportation Board on Tuesday.

These include $54 million to extend Berkmar Drive across the South Fork of the Rivanna River, an additional $10 million to further extend Hillsdale Drive Extended to Holiday Lane in Charlottesville, and $81 million to build a grade-separated intersection at Rio Road and U.S. 29.

A conceptual drawing of the new Rio Road intersection depicts four lanes in the middle of the highway being dropped below the existing intersection as they approach Rio Road. The outer lanes would continue at the current elevation and would pass through a traffic signal to turn left or right onto Rio.

Shucet said he believed VDOT could design the intersection so construction could be done with minimal disruption. The high cost figure includes aesthetic treatments.

Kristina Hoffman, a lawyer representing the Charlottesville Regional Chamber of Commerce, said construction of the new Rio Road interchange would be destructive to businesses along the corridor.

“We’d have to keep flow going during construction,” Hoffman said. “The impact on local businesses would be for six to 10 years.”

Shucet disagreed construction would take that long. He urged the business community to keep an open mind.

“I think that being afraid is going to condemn the constituencies the Chamber of Commerce has an obligation to represent,” Shucet said.

Other components of the package include $10 million for preliminary engineering for a future grade-separated interchange at Hydraulic Road, and $5 million to as partial funding for a second daily Amtrak train between Lynchburg and Washington, D.C.

“The Virginia Department of Rail and Public Transportation is working on this pretty hard,” Shucet said, adding the cost to purchase or refurbish a new locomotive and railcars would be around $20 million for the second train.

Shucet said he did not recommend full construction of a grade-separated interchange at Hydraulic Road at this time, but that one would eventually be needed.

“This means taking an early look and the studies that are necessary to see what would be required to deliver the grade-separation at Hydraulic,” Shucet said.

Panel members from out of the area were skeptical that investing so much on Berkmar Drive would be fruitless if it were not built as a limited access roadway.

Danville City Councilor Fred Shanks said Albemarle might be tempted to open the land to development.

“My whole issue is that the best use of that land would be to become commercial,” Shanks said. “I have little faith that rezoning would not occur.”

Supervisor Ann Mallek, who attended the meeting, but is not a panelist, said the county would keep the land as currently designated in the Comprehensive Plan.

“This is not in our growth area and that’s an important distinction,” Mallek said.

In fact, supervisors declined to expand the growth area to cover the land on which Berkmar would be built in a February 2011 vote.

Shanks said he would rather spend the $54 million to accelerate construction of the Hydraulic Road intersection.

Shucet said that would be premature.

“I think what’s going to happen when you start thinking about Hydraulic is that a lot of stuff has to work out right to make it happen,” Shucet said, adding preliminary engineering would allow VDOT to identify the various puzzle pieces needed to make it work.

Ed Craighill of the Lynchburg Region Transportation Advocacy Group said the funding should go to pay for projects that directly address existing U.S. 29.

“It’s a fiduciary responsibility to hit the high [accident] spots and that’s at Hydraulic,” Craighill said. “You can’t guarantee me [Berkmar] will move traffic through U.S. 29 and that’s what this meeting is about.”

Trip Pollard of the Southern Environmental Law Center said he was glad to see the Hydraulic Road intersection get some funding in the recommendation, but said he did not think that project should be built at the same time as Rio.

“I can tell you that trying to put Hydraulic and Rio at the same time would sink the ship,”
Pollard said.

“I feel as if Lynchburg is being paid lip-service by the Charlottesville MPO,” Perrow said.
“Local businesses were happy to have the bypass and now we have a solution the business community does not appear to endorse.”

Perrow said it would be a disgrace if money that had been designated for U.S. 29 would be used to build a local street network.

“I can’t help thinking that if these projects were so important, why weren’t they developed a decade ago?” Perrow asked.

These are an additional $6 million for the so-called Best Buy Ramp to pay for sound barriers, $16 million to cover the full right-of-way for the existing Hillsdale Drive project, and another $18 million for the widening of U.S. 29 between the river and Hollymead Town Center. That project’s current scope is only from Ashwood Boulevard but will now be extended to Polo Grounds Road.

There is also another $3 million to cover cost over-runs for an adaptive traffic signal system that is scheduled to be deployed over the summer.

Shucet’s recommendation did not include closing off any left-hand turning movements, a suggestion which had proven to be controversial. He also did not recommend any transit projects as part of his recommendation.

One panelist asked if Shucet’s recommendation included a timeline of which projects would be built first.

“There’s still a lot of work to develop these through the preliminary engineering stage,” Shucet. “I think they can all get started in a five-year window but I may spend a lot of time between now and Tuesday thinking about that.”

That’s when Shucet will make his report to the Commonwealth Transportation Board at the Doubletree Hotel beginning at 2:00 p.m.

He also acknowledged that his recommendation did not have a consensus from the panel. He suggested panelists who disagreed could make their views known to the CTB at next week’s meeting.