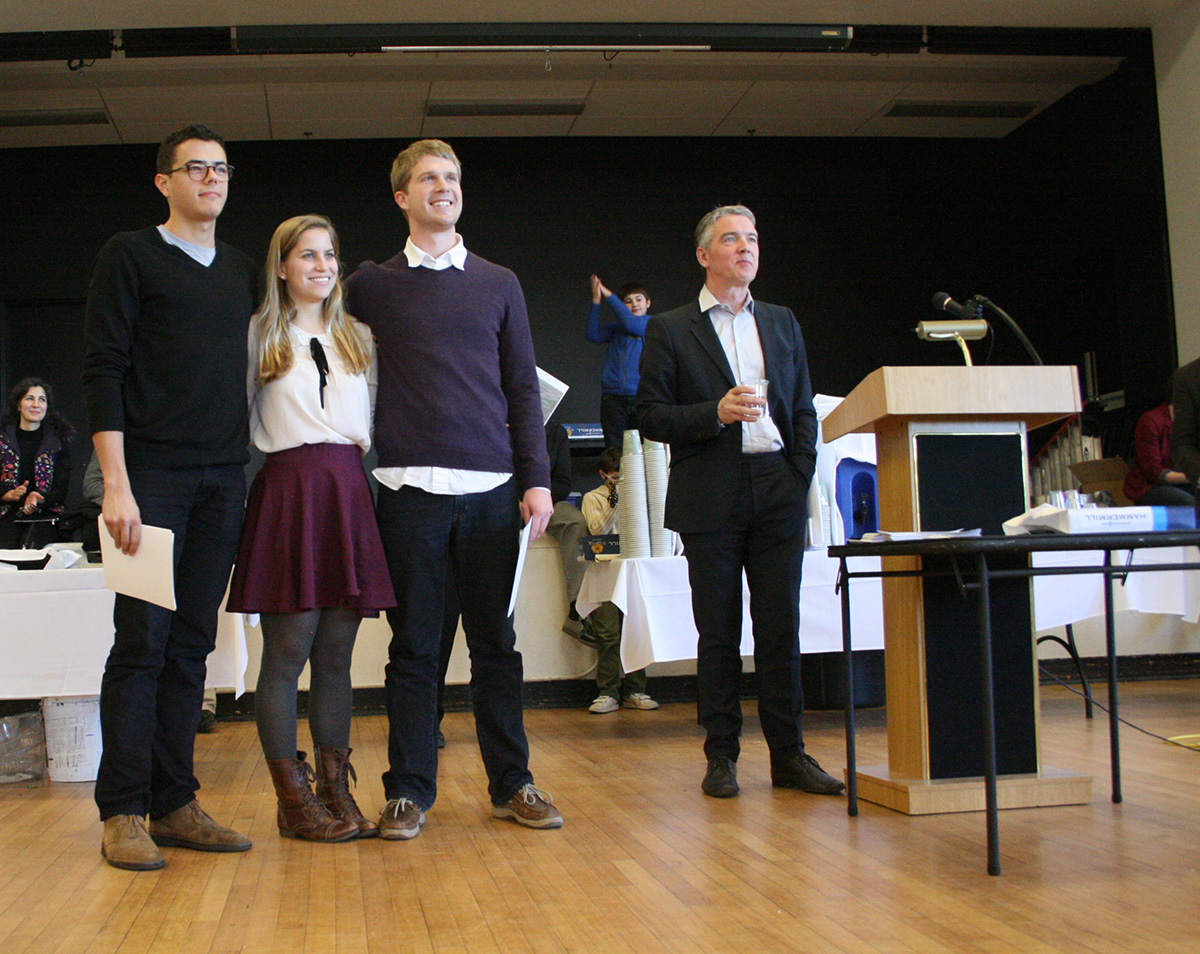 After a week of intense study during which architecture students at the University of Virginia dreamed of future possibilities for U.S 29 in Albemarle County and Charlottesville, the main prize has gone to a team that expects greater housing density and a return to agriculture in the suburbs.

“[Fetish Urbanism] integrates all the [qualities] that are necessary,” said Xaveer de Geyter, a Belgian architect who served as the leader of the third annual School of Architecture Vortex.

“The only thing wrong about it is the title, but I guess this is a discussion we can have afterwards,” de Geyter said at the end of an awards ceremony Sunday at Carver Recreation Center.

Chad Miller, a first-year landscape architecture student and member of the winning team, said his group took inspiration from a panel of local activists that kicked off the vortex.

Their idea built upon the popularity of Charlottesville’s Downtown Mall while coming up with a big idea that could be practical despite sounding far-fetched in 2014.

“We started focusing on the economic vitality that coincides with transportation corridors,” Miller said. “How do we reimagine contemporary urbanism based on [the public’s] preferences for urbanization?”

The winning team reimagined the 29 corridor as one that harnessed energy generated from diverse sources such as wind created by flowing traffic.

Miller’s team looked ahead 50 years and envisioned density by the road and agricultural uses replacing suburbia along its fringes.

“Our transportation scheme involves separating the different modes of transit,” Miller said. “We have a buried expressway, and to the side of that is buried local traffic, which is dug into the ground but in open air.”

The top prizes as chosen by the public and by students both went to a team whose project was called “Resi[dense]city,” which envisioned the redevelopment of the intersection of U.S. 29 and Hydraulic Road as a dense urban village.

De Geyter said he was glad to have the opportunity to judge the results of such a large competition that imagined new ways to envision the real world.

“Some of my colleagues offer a world that imposes more than it suggests,” he said. “This [can be] quite dogmatic, and I think very little can be learned from that.”

De Geyter said that working on a conceptual project like the one for Albemarle and Charlottesville would not be possible in Western Europe.

“You live in a certain degree of splendid isolation,” de Geyter said. “You are here in the school, working together, and that debate grows out of that. I think that is essential for architectural education.”

Many of the projects envisioned a time in the future when people use transportation differently.

One team envisioned the existing 29 as serving both through-traffic and local traffic by converting some of the lanes on the highway into frontage lanes.

Another imagined a world in which drones will deliver freight directly to consumers, reducing the need for a commercial corridor.

At least half of the 30 projects envisioned some sort of a light rail component, including one that depicted all of Charlottesville and northern Albemarle as having a transit system similar in visual feel to London’s Underground.

De Geyter included that project as one of several honorable mentions.

“Greenway may not be the most realistic one,” de Geyter said, “but it suggests a new world on site that, of course, would also profoundly change the whole experience.”

Another team took a stab at redefining Fashion Square mall in an entry called “29 ReFashioned.”

At least one entry delved into political reality by calling for a new city to be created within Albemarle’s designated growth area so it could better carve out its own identity while becoming a new urban place.

“The New City will forge its own identity,” read materials for the “NEX-US29” project. “The New City is a living habitat — sensitive to people and ecological systems.”

Another team envisioned the current highway to be placed underground in a tunnel, somewhat echoing the possibility of converting the Belmont Bridge into an underpass.

School officials stressed that the yearly vortex is an academic exercise, but one that could impact the community in the future.

“We are not solving the problems of U.S. 29 for tomorrow,” said Inaki Alday, chairman of the architecture department. “But these are a series of ideas to trigger reflection, and should trigger the interest of some of you.”