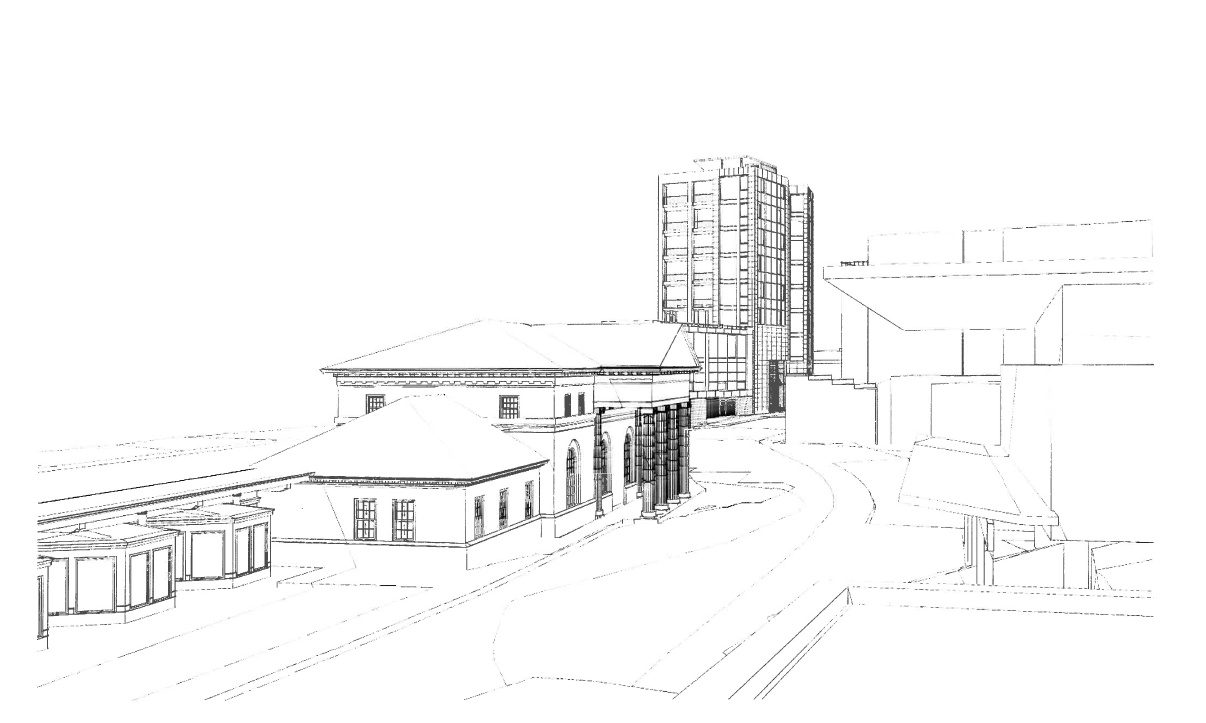 The Charlottesville Board of Architectural Review has recommended that the City Council deny a special-use permit for a proposed nine-story tower on Water Street in one of the city’s design review districts.

“What we are charged with is helping to manage and mediate change and growth and the evolution of buildings within this architecturally controlled district that this city has decided is important to protect,” said BAR member Justin Sarafin. “Going up to a 101-foot height would have an adverse effect on this district.”

Water Street Tower LLC wants a permit to build a 101-foot building at 550 E. Water St. rather than the 70 feet that is allowed under the downtown zoning.

The property is only a quarter of an acre and is between the old train station and the King Building.

“Before City Council takes action on the special-use permit, they first must consider the BAR’s opinion on whether there are impacts that could be impacted with conditions,” said Mary Joy Scala, the city’s historic preservation planner.

Residents of the Holsinger, a five-story building completed in 2006, sent a letter to the board expressing their concern.

“The height, scale, mass and placement of this project are visually and architecturally incompatible with the site and the adjacent historic buildings,” reads the letter. “The project, which is in the Downtown Architectural Design Control District, also would have significant adverse effects on the historic district neighborhood.”

Holsinger residents said the project would tower over neighboring structures, would be too big for the site and would create traffic and parking issues.

“Its proximity to the new Transit Center would cause issues of congestion and safety for the many Transit Center users who come and go along Water Street,” the letter continued.

Robert Nichols, the architect for the project, submitted drawings for both the by-right possibility and the two-tiered structure that would be built with the permit.

Under his proposal, the eastern side of the building would be 40 feet tall and the western side would rise to 101 feet.

“We think the urban grid can accommodate [us] quite comfortably,” Nichols said. “We believe the composition allowed under the permit is better than by-right.”

Nichols said the by-right use would present more of a wall and more of a boundary than what he could do if granted a special-use permit.

“I hope it’s clear the request is not an attempt for maximization but optimization of the site,” Nichols said.

One resident of the Holsinger objected to being shown both drawings and said seeing the by-right drawing was a threat.

“This proposal is being presented as a lesser of two evils,” Samuel Hellman said. “It is incongruous to me at least and to my colleagues with the remainder of East Water Street.”

Nichols denied that showing both images was a threat.

“I’m not armed for a plan and financing for that [version of the] building,” Nichols said. He said the taller building would be a better alternative.

Scala said the BAR has no power to make the building any smaller than what the zoning code allows. But one board member questioned that statement.

“I’m not sure we have to agree we have to give them 70 feet by-right,” said Kurt Keesecker. “It seems reasonable to me that we could get a well-designed building in a by-right situation.”

Some members of the BAR said they liked the design of the building, but not necessarily at the location.

“One thing that does seem right is the way the special-use permit is being positioned to readjust the volume as adding more space,” said BAR member Tim Mohr. “I feel we’re somewhat trumped by zoning which says 70 feet.”

Mohr said the City Council should reconsider the zoning for the property because of its unique shape.

“It seems like the only way for this building to work is to have a massive garage, and I’m struggling with that,” said BAR member Carl Schwarz.

Schwarz also said he was not sure the permit should be granted because the city would only gain seven new housing units and 16,000 square feet of office space.

The permit request is expected to go before the Planning Commission at its July 14 meeting.