Late last year, the city of Charlottesville announced that consulting firm Rhodeside & Harwell Inc., along with the firm Brick and Story, would steer the final stages of the city’s Comprehensive Plan, an affordable housing strategy and zoning changes that could allow for levels of higher density in areas of the city where it is now restricted. The two-year process kicked off in January, and the consultants said at the time that they wanted more seats at the table and targeted community outreach. With a global pandemic altering people’s day-to-day lives, the consultants and committee now are finding workarounds to continue its outreach and planning process.

These times may call for social distancing, but community members are still coming together — albeit virtually — to give input that can inform the final plan.

“We are largely trying to make sure that we are able to get in touch with as broad a reach of Charlottesville residents — in particular, people that are not always part of the process,” said LaToya Thomas of Brick and Story. “People of color, low- and moderate-income individuals and non-English speakers.”

According to Jennifer Koch, a senior associate at RHI, spreading the word about the virtual discussions have taken traditional venues, like media releases from the city of Charlottesville and social media posts, but also through leveraging connections from the steering committee. The committee is composed of individuals from various associations, nonprofits and arms of local government like the City Council and the Planning Commission.

“We are really checking in and seeing who are we hearing from and who are we not hearing from, and adapting our approaches accordingly,” Thomas explained.

So far, the average attendance for the virtual discussions has ranged from six to 13 people.

Koch said that with the small group discussions and steering committee discussions, there is a strong focus on how affordable housing fits in with the plan.

“People are really aware of the connections that exist between housing, affordability, access to transportation and access to jobs,” Koch said.

She also noted that people are interested in how the consultants are reaching out and how people who aren’t online can participate as well. Aside from the ability to sign up for webinars or watch past ones, community members can call a toll-free number. There is also a survey that exists in both English and Spanish that online, but Koch and Thomas say they are working to send paper copies to people.

In conversations so far, residents have presented a range of ideas and expressed anxieties and frustrations.

“From an engagement standpoint that’s a good thing,” Thomas said.  “I feel like the one thing that we’ve intentionally tried to make different with this princess is to create that space for people to have those open and honest conversations about what’s not working in Charlottesville and to have the space to pull out some of the big elephants in the room that some folks aren’t comfortable talking about like inequity and racism.”

By July, Koch said, a summary will be shared with the community that includes ideas and input so far, along with what key priorities emerged and demographics that have been heard from.

“At every step in the process we are planning to share a summary of what we are hearing, and how that input will be used in the process,” Koch said.

As the current phase of the overall process is focused on information-gathering with people, longer term details regarding the Comprehensive Plan are still in the distant horizon.

“We are not trying to make any firm decisions, not until we really allow folks to go through the process of understanding what this is right now and goal-setting later in the summer,” Thomas said.

While virtual engagement opportunities are underway, the next phase of the process will involve drafting housing strategies and revising the Comprehensive Plan. The key, Koch and Thomas said, is first making sure that the community engagement informs the next steps.

The next discussion group is scheduled for 7 p.m. June 4. Participants can register here. 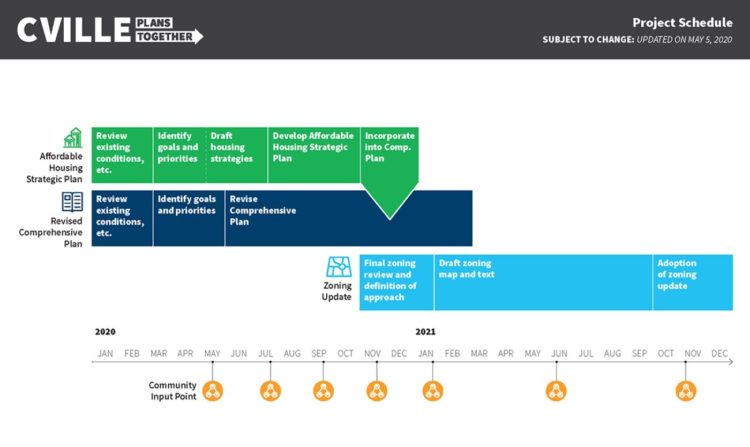