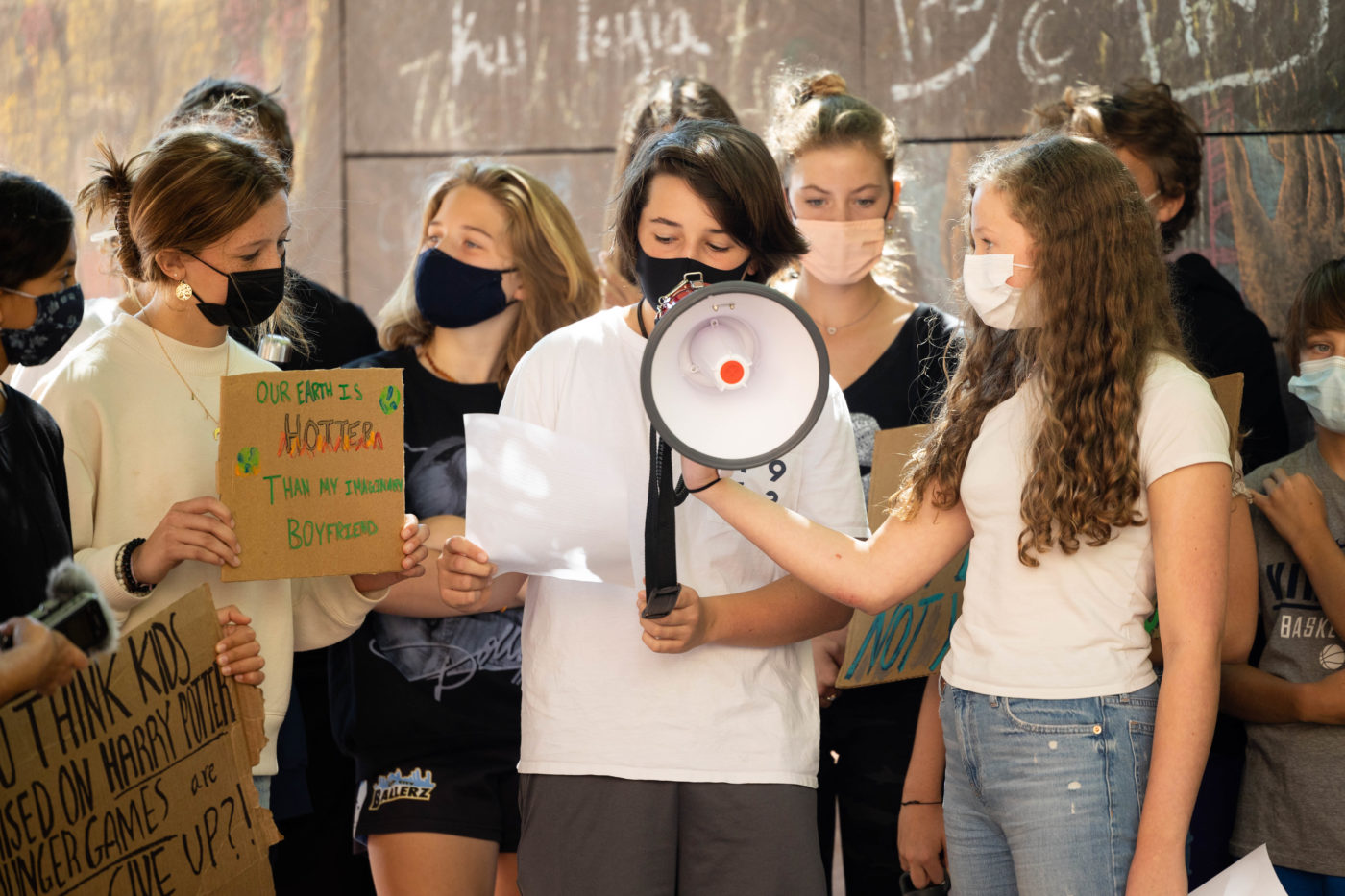 Activists present at the event had three specific demands for city council: Re-commit and take immediate action to meet the city’s unresolved climate goals, ensure a climate-first approach to all ongoing and future school renovation projects and invest heavily in infrastructure projects centered around mass transit and increased density in order to cut reliance on single-occupancy vehicles.

“After today, we really want to see the city recommit to those goals and to actually take steps to meet these targets,” said Gudrun Campbell.

Friday’s climate strike is the fourth one led by the Charlottesville High School freshman. The severity of climate change struck Campbell two years ago when she came across the work of Swedish activist Greta Thunberg. She took the opportunity to look into what the city was doing to combat climate change, and channeled her energy into leading her first strike at the age of 12.

Friday’s strike was the first strike Campbell held since the start of the pandemic.

In 2019, Charlottesville pledged to limit its carbon emissions to 45% by 2030, and hit zero net emissions by 2050. A year prior, Albemarle County vowed to hit a similar target in reducing its own carbon secretions from the county’s 2008 emission levels and reach zero by 2050.

Albemarle County is currently in Phase 2 of its Climate Action Plan set forth last October. The county is implementing actions set in place from its previous phase, which consisted of incorporating community input to better establish its goals. Phase 2 includes provisioning funding for climate-related investments and rewriting policies supporting reducing carbon emissions.

Since the city revised its CAP in 2019, Campbell said that it has not done enough to hit its goals.

The work Charlottesville’s done isn’t always visible to the community, says Susan Elliott, climate protection program manager for the City of Charlottesville. The city recently employed an Energy and Water Management Program that focuses on overseeing, managing and improving the energy and water performance of school and government buildings.

Charlottesville is also in the process of pursuing an Energy Savings Performance Contract, or an agreement between an agency and an energy service company that’ll allow an entity to obtain energy savings and improvements to facilities.

Elliott said the city is still on path to reach its climate goals. About 60% of Charlottesville’s carbon emissions are from businesses and homes with an additional 30% from transportation within the city. Hitting the goal will require efforts from the city’s residents, Elliott says.

“Changing fuel sources to renewable energy and reducing the waste of energy is one piece of the puzzle, but so is how we plan and build, and how we use and maintain or upgrade what we already have in place,” Elliott said.

Sustainable transit within the county is on the minds of those at the Community Climate Collaborative, also known as C3.  Latricia Giles, C3’s residential climate and equity program manager, came to Friday’s youth protest to support both as a representative and a concerned citizen.

C3, an advocacy organization dedicated to tackling climate change in Charlottesville and Albemarle County, released a year-long comprehensive report further outlining the activists’ transit-specific demands. The group surveyed over 250 Charlottesville Area Transit riders on their experience using the city buses in its September report. Many of the respondents expressed concern over the routes, claiming that some of the popular routes are not “well-connected to pedestrian infrastructure.”

Giles took part in facilitating the focus groups for C3’s September report. The spaced out frequency of stops and the limited routes caused many of the respondents to switch to lesser sustainable practices, such as ridesharing apps, to get around, she said.

“I think that’s the failure of our system,” said Giles. “We have to be finding ways to make solutions for all community members to have access.”

The report offered what it called sustainable solutions that the group said will benefit both riders and the planet. The September report suggests CAT make free fare permanent, put goals in place to increase ridership, return to pre-COVID service hours and utilize greener vehicles.

The walkout follows United Nations Secretary General António Guterres glaring remarks on the state of climate change, deeming it “a code red for humanity.” The UN’s Intergovernmental Panel on Climate Change climate report, released in early August, details many of the impending climate dangers and the science behind the causes and its consequences.

The IPPC is set to release a more in-depth report that will address certain impacts and ways to cushion them.

The only way to curtail carbon pollution is to bring greenhouse gas emissions down to zero, the report says. But even if warming were to reach net zero, events like melting ice caps and rising sea levels will still persist for thousands of years to come.

The recent climate report did not come as a surprise to Campbell.