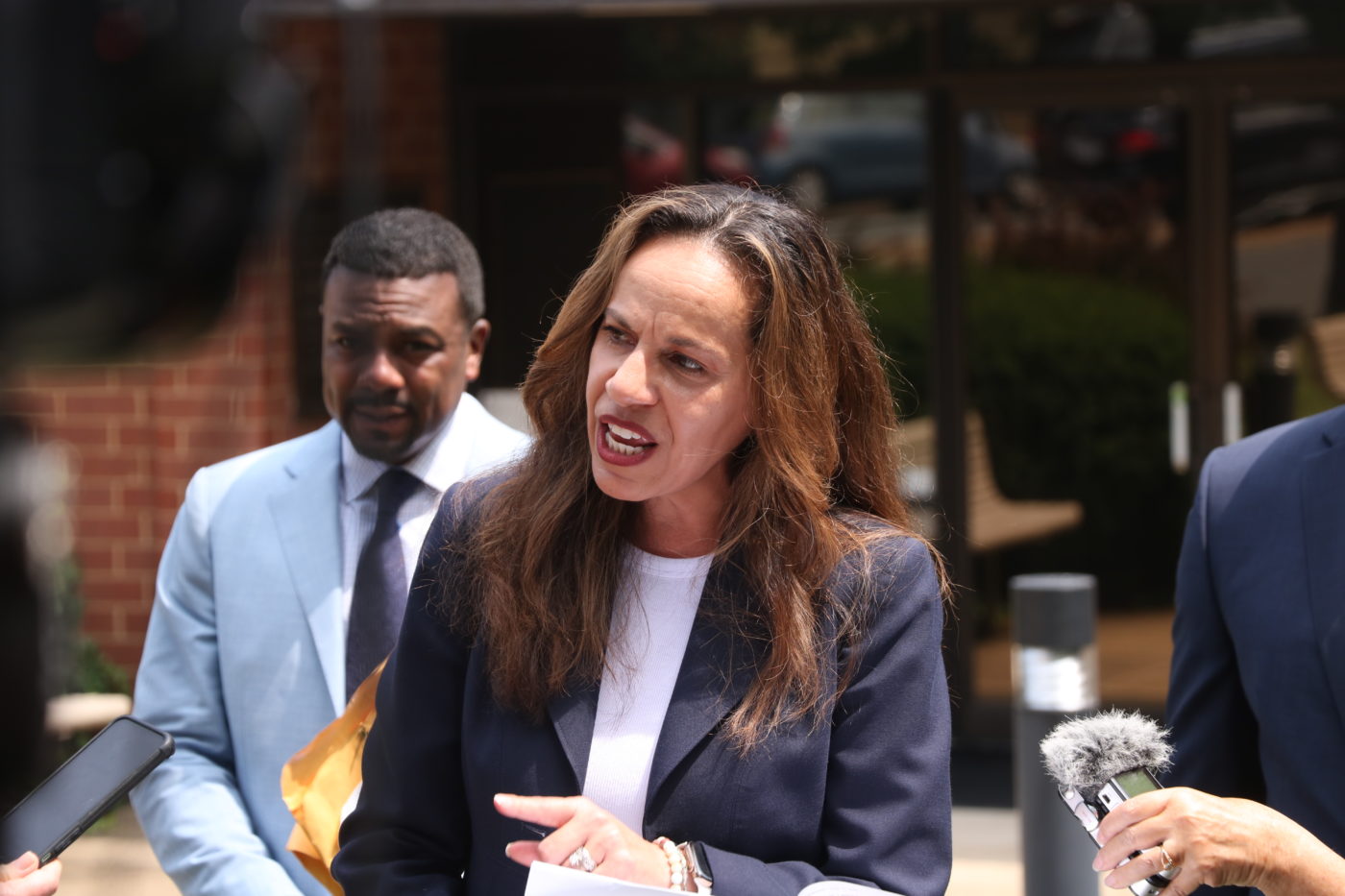 Former Police Chief RaShall Brackney announces she is suing the city of Charlottesville, nine of its top officials and a local police union leader over her Sept. 1, 2021 firing.

The 73-page lawsuit levies eleven charges against the city and specific people on Council, in city hall, the police department and outside of local government. Brackney alleges that she was disparaged and discriminated against because of her race, color and gender. Her Sept. 1 dismissal, she alleges, was in retaliation for her disciplining white officers for “racist and departmentally inappropriate behaviors.”

“The city of Charlottesville and CPD was and still is so invested in its racial paternalism, misogyny, and nepotism,” Brackney said during a Wednesday morning news conference outside of Charlotteville’s federal courthouse, during which she announced she was suing the city. “They would rather conspire to oust me than dismantle or confront violent individuals in CPD and still in city government.”

Mayor Lloyd Snook (who is named in the lawsuit) along with Councilor Brian Pinkston and Councilor Michael Payne (who are not) declined to comment on the suit. No other councilors responded to Charlottesville Tomorrow’s requests for comment.

Snook did say that if Brackney wins the case, the city’s insurance would likely cover any damages she is awarded.

Read more: The unprecedented turnover in Charlottesville government could have ‘enormous consequences’ for the community — this is how

The suit says that Brackney’s employment was terminated after she took disciplinary action against officers for “misogynistic, harassing, and racist behaviors” during the summer of 2021.

The lawsuit does not give details, but city news releases about those personnel issues at the time said the officers were members of the city’s SWAT team. They had threatened to kill command staff in text messages, had held “unauthorized trainings” with department gear (in some of which their children were involved), and had used department-issued phones to circulate nude images and sexual simulations.

Brackney terminated or suspended the officers involved and disbanded SWAT.

At Wednesday’s news conference, Brackney’s lawyer, Charles Tucker, defended her actions as doing “the job that she was hired to do, that the city hired her to do.”

“She needed to fire these officers for their conduct, as the law allowed her to do and this is exactly what she did,” he said. “This was a victory for the police department and the people of Charlottesville, a sign of real change. But for the officials named as defendants and Dr. Brackney’s complaint, this was a bridge too far.”

Following her termination, Brackney and her attorney attempted to negotiate a settlement with the city outside of court, asking officials to pay her $3 million in damages and publicly apologize, or to reinstate her as chief. If the city did not settle by Nov. 26, she said, she would sue.

By the end of November, Tucker said the city had not responded to Brackney’s request and Brackney filed a charge with the Equal Employment Opportunity Commission, EEOC.

The EEOC is responsible for enforcing federal anti-discrimination laws. Before someone can sue for discrimination, they must first file with the EEOC.

“The first step is that we try to mediate between both parties,” said Joseph Olivares, a spokesperson for EEOC. “If they don’t agree, we can investigate if we believe the discrimination ocurred or not and make a determination on that.”

The EEOC must issue a “right to sue” letter before a suit can be filed. Olivares would not say whether the EEOC issued one in this case.

The City of Charlottesville is listed as the main defendant in Brackney’s lawsuit along with 10 individuals:

The lawsuit centers around the actions these 10 individuals took in the short period leading up to Brackney’s termination.

After she disciplined and disbanded the SWAT team in the summer of 2021, the Police Benevolent Association — a law enforcement union — conducted a survey that 64 officers responded to. That survey indicated dissatisfaction and low morale in the department. It also accused Brackney of poor leadership.

Brackney’s lawsuit alleges that the survey was “targeted” to paint her in an unfavorable light.

It was “specifically intended to target and highlight [Brackney] in a negative manner … after, and because of, [Brackney’s] recent investigation and disciplinary actions against former and current employees.”

Former Mayor Nikuyah Walker later recorded a conversation with City Manager Boyles in which he said the PBA president, Wells, wanted to remove Brackney from her position.

“This Wells guy, all he has in his sights is the chief’s badge,” Boyles was recorded saying. “He is living 24 hours a day, seven days a week to try and get her fired. He can say all he wants to, I think he could care less about the officers. For him, it’s a mission.”

The day after the Benevolent Association released its survey, Brackney, her Assistant Chief Mooney, City Attorney Robertson and the City Manager Boyles (all named in the lawsuit) collaborated on an Aug. 20 news release supporting Brackney’s actions and detailing the “disturbing behaviors” of the disciplined officers.

Boyles later said that the PBA-conducted survey and a separate internal police department survey influenced his decision to terminate her.

The internal survey indicated that 55% of officers felt overall negative toward the department. Many officers indicated they were either actively looking or planned to look for a new job. The survey had few specific grievances against Brackney.

Boyles said he examined both surveys, spoke with area stakeholders and six police officers, then chose to terminate her. 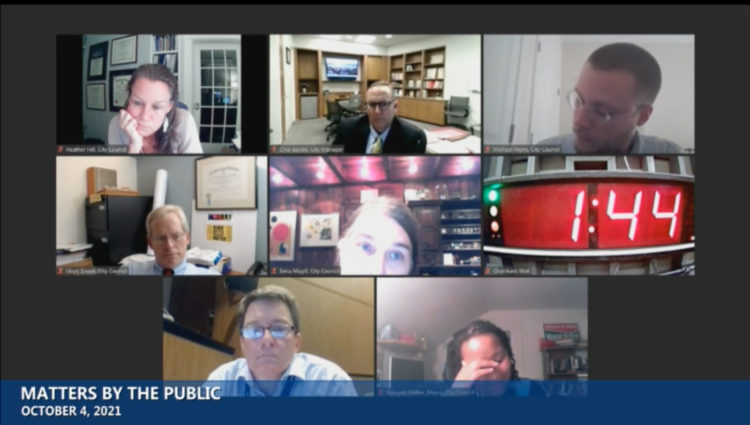 “In order to dismantle systemic racism and eliminate police violence and misconduct in Charlottesville, we need a leader who is not only knowledgeable in that work, but also is effective [at] building collaborative relationships with the community, the department, and the team at City Hall,” Boyles said in a statement published on the city’s website. “While very good work and progress has been made, I ultimately decided new leadership was required to continue the City’s progress towards building a new climate and culture within the department.”

During a City Council meeting weeks later in which members questioned Boyles decision, he added that, “I knew that there would be expected changes within the department that should be remedied — and it was my position that the only way to remedy that would be a change in the chief. It was that direction. It was no fault. There were no particulars but that that direction needed to change to preserve the department so that it could continue to provide the safety and protection that our citizens deserve.”

The suit references an audio recording Brackney allegedly made during a meeting with Boyles five days before she was fired. Brackney’s attorney declined to share the full recording at this time, but the suit includes a quote from it.

“I know without a doubt that you will make a great chief in many places, I am just convinced that this community will not allow you to be a great chief here,” Boyles was allegedly recorded as saying. “They never gave you a chance from day one and you came into an impossible situation and given a nearly impossible vision to meet.”