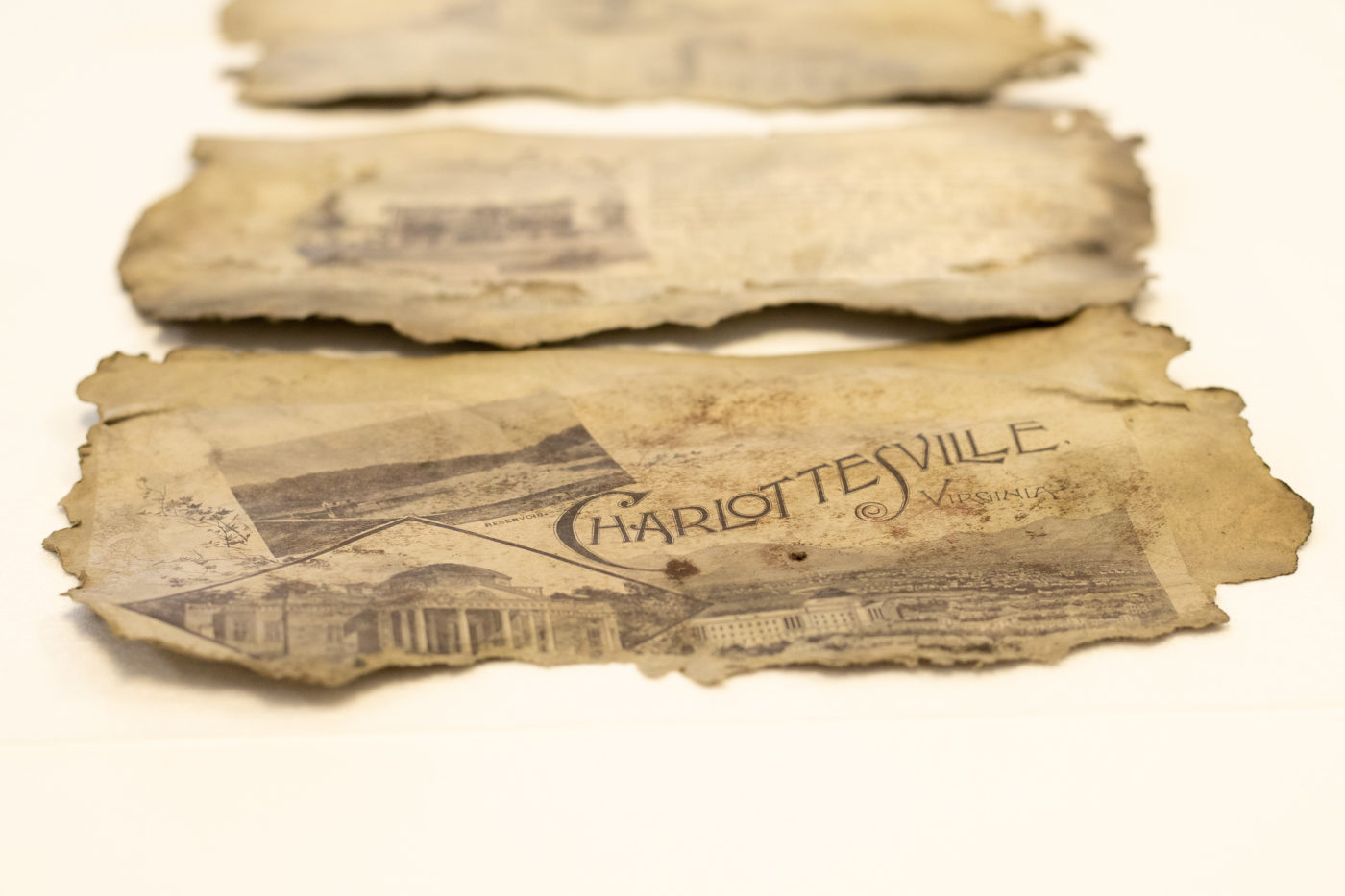 Sue Donovan, conservator for Special Collections for University of Virginia Library, displays the contents of a time capsule that was buried beneath the “At Ready” Confederate Statue that was removed on Sept. 12, 2020.

The day Sue Donovan, the conservator for special collections at the University of Virginia, watched Albemarle County unearth its Confederate time capsule from beneath the ‘Johnny Reb’ statue in Court Square, she knew the contents would be damaged.

“But I wasn’t prepared for the extent of the damage to the paper-based items,” she said.

The time capsule had been placed in a copper box in the base of the At Ready statue when it was erected in 1909. Very shortly after, that base expanded beneath the multi-ton monument, crushing the box slightly and popping off its lid.

“This meant that the contents of the box had been soaking in groundwater since slightly after the box had been put into the ground in 1909,” Donovan said at a recent Albemarle County Council meeting.

Once exposed, the two large stacks of paper — which comprised the majority of the capsule’s contents — melted away when touched, like something at “the bottom of a silty lake,” Donovan said.

Still, some of the items were recovered. There was a silk ribbon and a cloth Confederate battle flag still intact. The team found a couple of medals, marbles and bullets. And Donovan even managed to tease out a few pieces of the paper items from the middle of the piles.

Some of those pages have been dried out, others were sent to be carefully frozen in the hopes that it will enable them to be safely peeled apart, and still more were glimpsed for just long enough to be photographed before they disintegrated into nothing.

“The images themselves that we took during the salvage process, are an important part of the collection, because they couldn’t be salvaged,” said Molly Schwartzburg, the curator at the Albert & Shirley Small Special Collections Library, who helped with the salvage. “You’d see [them in] an opening, then couldn’t peel the page back.”

The UVA special collections team have yet to formally sort through all the images and pages recovered and identify them. A list of the things Albemarle County and the local chapter of the Daughters of the Confederacy, which helped erect the monument, placed in it was published in The Daily Progress the year it was constructed.

There are already a few items that were not on that list found in the box — like the marbles and the Confederate battle flag.

The Board of Supervisors voted on Nov. 20 to deed the contents of the capsule to the UVA special collections library so it can be appropriately stored, studied and displayed.

The library, along with the county and UVA’s Nau Center for Civil War History plan to hold a public Zoom presentation in January to formally unveil the contents of the capsule.

This is Albemarle’s only known Confederate time capsule — but that does not necessarily mean it is the only one in the area. In the early 1900s, time capsules were commonly used as a form of fundraising, where people and organizations would pay to have something put inside.