A closer look at proposed $171.6 million budget for Charlottesville 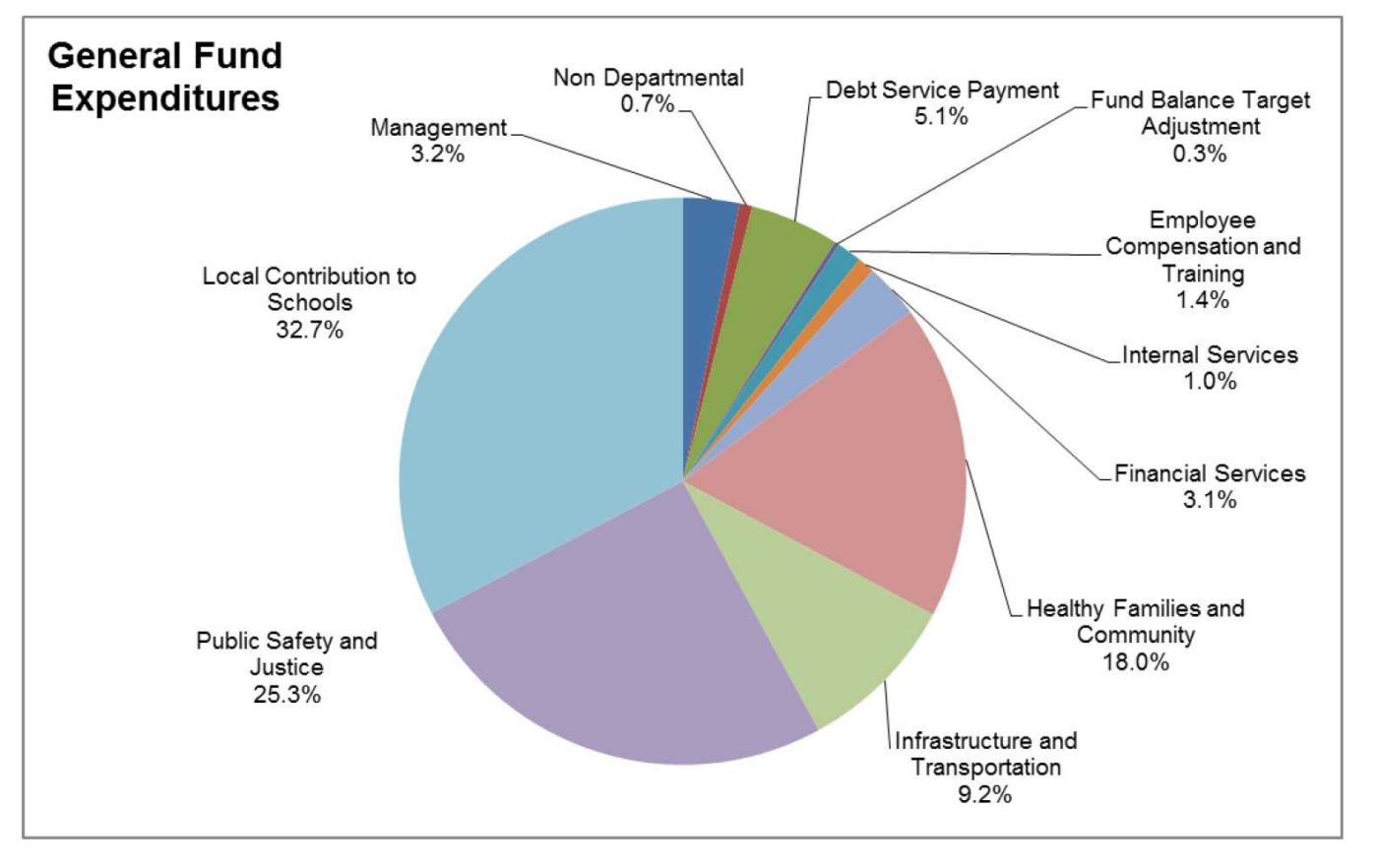 Charlottesville City Council will be presented Monday with a $171.6 million operating and capital budget for the fiscal year that begins on July 1, 2017.  That is a six percent increase over the current fiscal year.

The budget reflects direction made by Council to increase the amount of funding available for affordable housing and to help jumpstart redevelopment of public housing units run by the Charlottesville Redevelopment and Housing Authority.

“This was a proposal that Vice Mayor Wes Bellamy brought forward to the Council as part of the discussions about the budget and being responsive to the Blue Ribbon Commission on Race, Memorials and Public Spaces on some of their recommendations,” said City Manager Maurice Jones. “This investment in public housing is an important signal that the city is serious about seeing redevelopment occur.”

The real estate property tax rate remains the same at 95 cents per $100 of assessed value. The budget does not call for increases in any taxes or fees.

In all, Jones’ budget proposes contributing $16 million to the Charlottesville Affordable Housing Fund through fiscal year 2022.

That is more than double than the $7.8 million that has gone into the fund over the last five years.

However, there is no decision yet for how that money might be used.

“We have to get creative in our efforts to do that, that go well beyond just what we’ve done in the past,” Jones said. “What this does for us is give us flexibility and opens up the doors to other creative options that may be out there for us to increase the number of affordable housing units that we have in the city.”

The Housing Advisory Committee has been prioritizing recommendations made last year by the firm RCLCO.

In addition, the city will contribute an additional $2.25 million to the Charlottesville Redevelopment and Housing Authority over the next five years. That entity is not part of city government but rather an independent body created in 1954 following a referendum by voters.

Redevelopment has been a priority since the CRHA adopted a master plan in July 2010 that called for phased renovations at the city’s public housing sites, including construction of several dozen units at CRHA-owned property on Levy Avenue.

Since then, Council authorized a study known as the Strategic Investment Area in March 2012 that set a general direction for how the 330 acres south of downtown Charlottesville should be redeveloped.

Three public housing sites are within the SIA as is the Friendship Court, which is subsidized through Section 8 funding from the U.S. Department of Housing and Urban Development. The Piedmont Housing Alliance is working on a plan to redevelop the 150-unit complex into a mixed-income facility with a much higher residential density.

Last year, Council asked for a redevelopment manager to oversee the city’s involvement in the SIA area. Brenda Kelly was hired late last year to fill this position and her office has an annual budget of $153,096. Additionally, the five-year capital improvement program includes $1.25 million for implementation of city projects within in the SIA.

“We have someone who every single day now is focused on not just redevelopment of public housing but redevelopment of the SIA,” Jones said. “An important part of what Brenda is doing right now is meeting people, having conversations and working with folks on establishing what needs to be done for us all to get on the same page.”

A contribution to support Public Housing Association of Residents will increase from $25,000 in the current year to $44,800 in the next fiscal year.

Many other initiatives included in the budget were discussed by Councilors at work sessions and in a series of private meetings.

The budget includes $450,000 to fund operations of the African American Heritage Center at the Jefferson School. Council made a commitment to provide two years of funding.

Another $105,000 will go to other Council priorities such as hiring a coordinator to promote achievement among young African Americans. Extending the hours at the city’s community recreation centers at Tonsler Park, Westhaven and Friendship Court will cost just over $37,000. Another $68,461 will go to hire a traffic officer for the police department to help enforce speeding and other driving laws.

Other new positions include maintenance workers for the parks department, a part-time assistant to help staff the Downtown Job Center and a part-time customer service representative for the treasurer’s office. A part-time historic preservation position will be converted to full-time at a cost of $23,811.

A vacant grant position will be converted to a position to help the city coordinate with the Virginia Department of Transportation. Last year, the city was awarded with nearly $30 million in funding for enhanced streetscapes on portions of East High Street, Emmet Street and Fontaine Avenue.

The city’s golf course will get a $134,312 payment from the general fund in order to subsidize operations.

Another $25,000 will help the parks and recreation department begin a system-wide master planning effort. The last one was conducted in 2006.

The city has contributed $2,375 a year for the First Night Virginia celebration but that amount was zeroed out for this year.

The city will contribute another $57,000 into a category for “arts coordination and planning,” matching the same amount as the current fiscal year which has not yet been spent.

The idea had been for arts planning organizations to apply to use the money, but four applications submitted were rejected by the city. Council is now considering the possibility of an additional employee in city hall to coordinate arts planning.

The capital budget for the next fiscal year is $23.27 million, the first year in a five-year capital improvement program of $106.4 million.

The first year includes $4.5 million in city funds for the Belmont Bridge replacement that will be a match against VDOT revenue sharing funds. Other projects funded in the next fiscal year would be $1.66 million towards a new track at Charlottesville High School, $3.25 million towards the West Main streetscape and $1.3 million for repairs to the bridge at the Route 250 and Emmet Street intersection.

The parks department will get $500,000 to implement the McIntire Park master plan. The five-year plan calls for $1.5 million over the next two years for improvements at Tonsler Park and $555,000 over two years to renovate the tennis courts at Pen Park.

The Senior Center will get $1.2 million over the next five years for their new facility at Belvedere. The city will also contribute $192,972 to an advanced technology center at Piedmont Virginia Community College.

The capital improvement budget features $10 million for a new parking structure. That’s in addition to the $2.85 million City Council has agreed to spend to purchase the land at the corner of Market Street and Ninth Street.

Council will receive the budget on Monday evening and will hold a work session in CitySpace on March 9 at 5 p.m. A community budget forum will be held in the same location on March 15 at 6 p.m. followed by additional work sessions on March 16 and March 30 at 5 p.m. in CitySpace.