A Cville Plans Together explainer 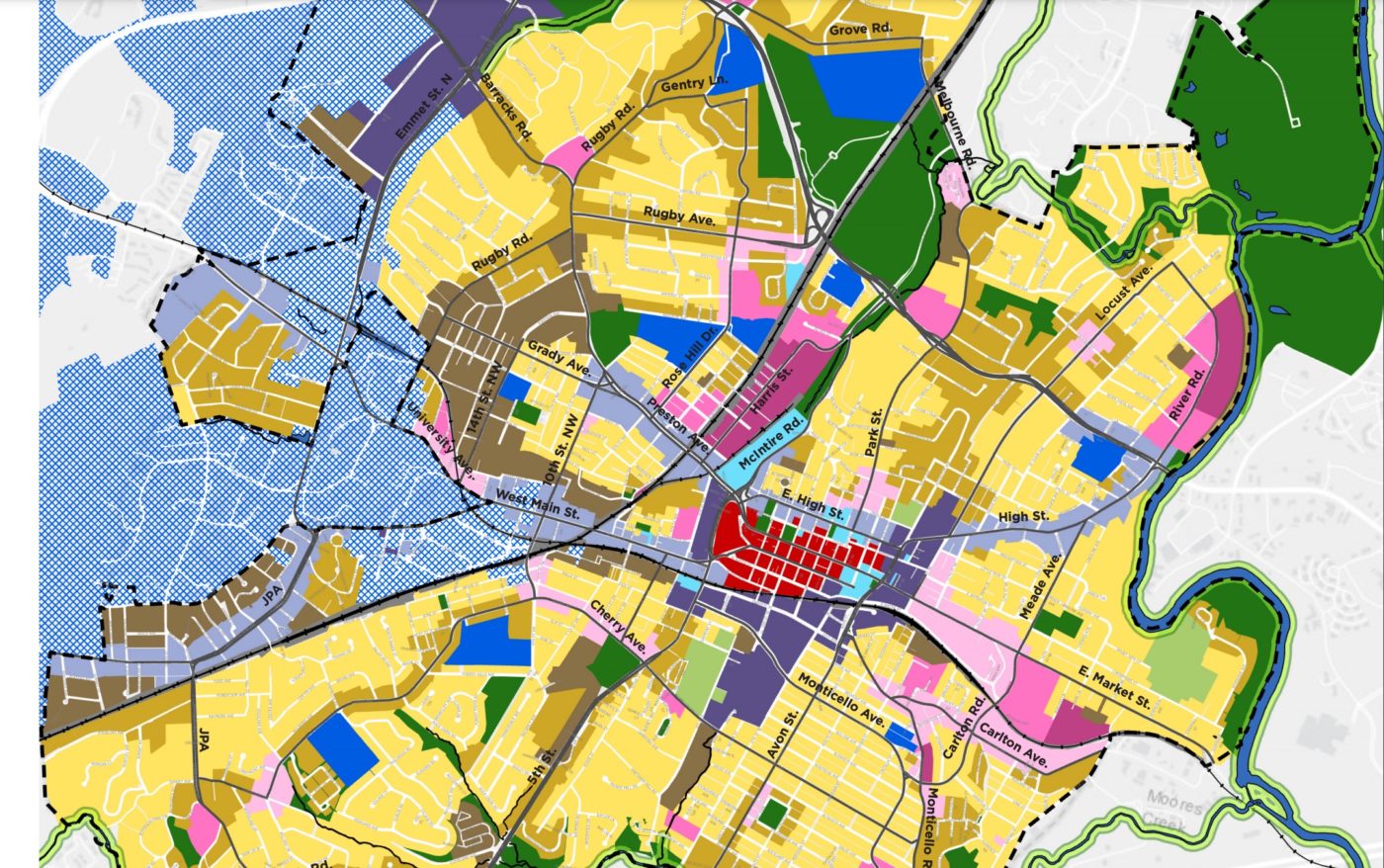 This story has been updated to reflect a new end date of the current community comment period (now June 13), the correct date of the City’s decision to pause its Comprehensive Plan update and search for a new consultant, as well as information on the timing for the next draft of the future land use map.

In 2017, Charlottesville began a revision of its Comprehensive Plan, something that per Virginia law, all cities and counties in Virginia must have. Since the turn of the century, Charlottesville has revised its plan in 2001, 2007 and 2013. The current revision of the Comprehensive Plan began in 2017, and the City Council put the process on hold in January 2019 to search for a new consultant before tapping Rhodeside & Harwell Inc. (RHI), for the job later that year.

The consultants are working alongside members of the community in the Cville Plans Together initiative to create a few different documents that will become part of the Comprehensive Plan. They’re working with:

Staff from the city’s Neighborhood Development Services, who offer local knowledge and expertise.

Individual residents, though this has been a bit hindered by the pandemic, said Jennifer Koch, Cville Plans Together’s project manager. They’d hoped to have many different types of listening and Q&A sessions, in-person and online, to reach a wider swath of folks. They’ve used online surveys and emails, online webinars, door hangers, flyers, face-to-face conversations sometimes facilitated by steering committee members, as well as more recent outdoor pop-ups and are encouraging people to call, send emails and more with their thoughts.

Cville Plans Together’s first step was to develop an Affordable Housing Plan, which the Charlottesville City Council endorsed in March.

Next, they started work on an update to the Comprehensive Plan, which will have seven chapters*:

*chapter titles are subject to change

Cville Plans Together will then work on a rewrite of the zoning code. They’ll begin that process later this year and continue it into 2022.

The Planning Commission will then bring a final Comprehensive Plan (which will include the future land use map) to the City Council for approval.

We know you have some questions.

What is the future land use map?

The future land use map “is laying out a vision for where land uses should take place in the city,” Koch said. It’s saying that in the future, this is how that land could be used/built upon. It is about goals and potential.

The land use map is one component of one chapter of the city’s seven-chapter Comprehensive Plan. It is a guide for future development throughout the city, including residential and commercial, as well as other job centers. (And there are many, many things that have to happen before plans for new buildings are even drawn and before construction sites are prepped and foundations are poured.)

View the most recent draft here.

What is the future land use map not?

The future land use map is not zoning.

People recognize that land use maps are frequently used to create zoning laws, or referred to when a property owner seeks rezoning for a parcel of land, so while it’s easy to see how the two can get conflated, Koch said, a land use map is not zoning.

Remember: The future land use map is currently IN DRAFT FORM.

How is the future land use map related — and not related — to zoning?

Once the land use map is finalized and adopted, it will become one aspect of a chapter in the city’s Comprehensive Plan, along with the descriptions RHI provided for each map category as well as zoning recommendations.

The land use map will serve as guidance, as a framework, for a new zoning code.

Zoning codes are more specific about what can be built on the ground and how.

Rhodeside & Harwell are on deck to undertake a rewrite of the city’s zoning ordinance, a process that is expected to begin later this year and continue into 2022.

When did Cville Plans Together release the draft future land use map?

The first draft came out in March. Cville Plans Together heard comments on that map and revised the draft before releasing another version (the current draft future land use map) in May.

After the current community comment period (previously open through May 31, but as of May 25 was extended to June 13), RHI will consider community input and discuss what they’ve heard, as well as ways to address the comments, with the Planning Commission in late June. Timing for yet another draft of the draft land use map will depend on what comes out of that meeting with the Planning Commission.

What else should you know about the map?

Other than the fact that the draft land use map is still a draft? Well, plenty. But we’ll try to just cover the basics for now.

For the most part, we’re still talking about private property, and property owners ultimately decide what to do with their property.

Lots of folks seem to be concerned about building heights allowed in various zoning categories, Koch said. Take, for example, the medium-intensity residential land use category (mustard yellow on the map). In the current draft, “that’s saying, throughout the city, we’d expect these areas, in places, to have up to 12 units and up to 4 and a half stories” if landowners whose land falls into this category choose to build those types of units, she said.

“We’re not saying up to that level would be allowed everywhere,” she said.

And this is where the distinction between the future land use map and the zoning code comes into focus: The zoning code would provide more details as to what can realistically be built in a neighborhood given parcel size, the size of surrounding buildings, etc.

During the Cville Plans Together steering committee meeting on May 19, Koch and her RHI colleague Ron Sessoms emphasized that while these documents are important, the land use map and zoning code alone will not solve Charlottesville’s housing problems. It must be supported by additional policies and initiatives if it is to contribute to both equity and affordability of housing and other building types throughout the city.

Got something to say about it?

There are a few different ways to learn more about all this, to ask questions, and to share thoughts, via Cville Plans Together:

All city residents, from short- and long-term renters to homeowners, landowners, developers — are encouraged to participate.