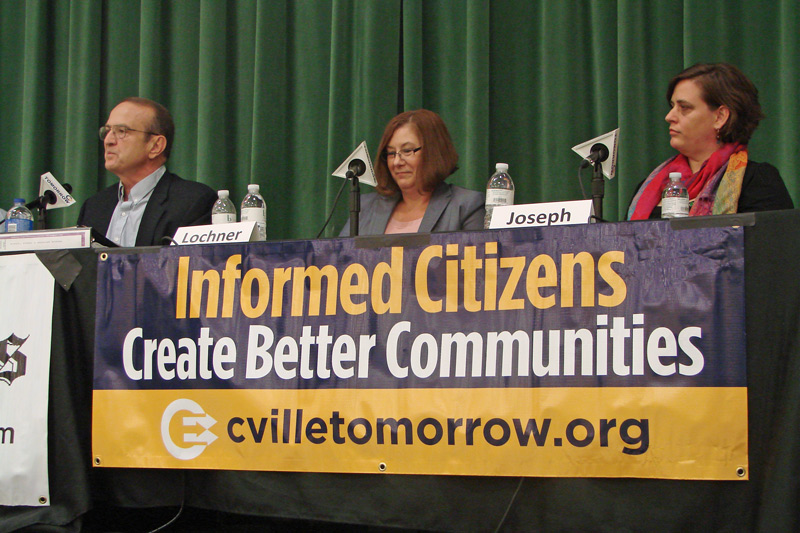 Jonno Alcaro (left) responds to a question while Catherine Lochner (center) and Dolly Joseph look on. All three are running for the At-large seat on the Albemarle School Board.

Budget challenges, capital needs and standardized testing were only a few of the issues debated Wednesday by candidates for the at-large seat on the Albemarle County School Board.

The conversation — co-hosted by The Daily Progress and Charlottesville Tomorrow — marks the first of three forums the two organizations are holding for the School Board hopefuls.

“Albemarle County has some wonderful schools, and I want to make sure that we continue our decades-long era of excellence,” said Dolly Joseph, who holds a doctorate in education and has taught in both Charlottesville City Schools and at the Peabody School.

When asked if he or she would support a budget initiative to expand Albemarle’s elementary world language program, Jonno Alcaro, co-owner of Meritage Financial Solutions, said he would.

“The younger we are, the easier it is for us to learn another language,” Alcaro said, adding that middle and high school course offerings would have to be adjusted to meet the needs of more advanced speakers.

Catherine Lochner, who serves on Albemarle’s Special Education Advisory Committee and Parent Council, also touched on middle and high school offerings, but said the current offerings are insufficient to handle the rising students who would be more advanced world language speakers. What’s more, Lochner said, choosing which language to teach would polarize communities.

Joseph said she would support an initiative because working on literacy in a language in a formal classroom setting would be beneficial.

With respect to what is projected to be a $6.4 million funding shortfall to start next fiscal year, Lochner said she’d encourage the community to be more vocal about why the annual budget shortfalls are so large.

“If we already are given such a large budget, what is it focused on if not education?” Lochner asked.

Joseph, however, said the division needs to continue to look for creative solutions to problems it can’t avoid, such as the cost of transporting children across a geographically large county.

Alcaro said he would communicate decreased state funding and space challenges to the Board of Supervisors and the community.

To address those capacity issues, Lochner said the division should try to reduce the number of students attending Albemarle High School, while considering construction of a new high school.

But Joseph said when a new school is built, students are redistricted into it, and said she’d like the redistricting conversation to be reframed around the cost to students to attend schools that have no room.

Alcaro said finding the right redistricting solutions will take time, and that he would listen to all parties involved.

Joseph said she’d like to see the role of Virginia’s Standards of Learning tests lessened.

“It’s an assessment tool, but it shouldn’t take the place of other assessments like portfolios and teacher assessment,” Joseph said.

Lochner said there is a role for the SOLs, but said it’s important for teachers to use the tests’ data to help struggling students.

Currently, the Albemarle School Board and the Board of Supervisors share the responsibility for early childhood education.

Lochner said it should be a joint responsibility, but that Albemarle should expand Bright Stars — Albemarle’s pre-k program for at-risk youth.

Joseph said that for budgeting purposes, she thinks handling pre-k as its own budget line item makes sense.

Alcaro said he supports pre-k, but asked which current elementary programs would have to be cut to make room in overcrowded schools.