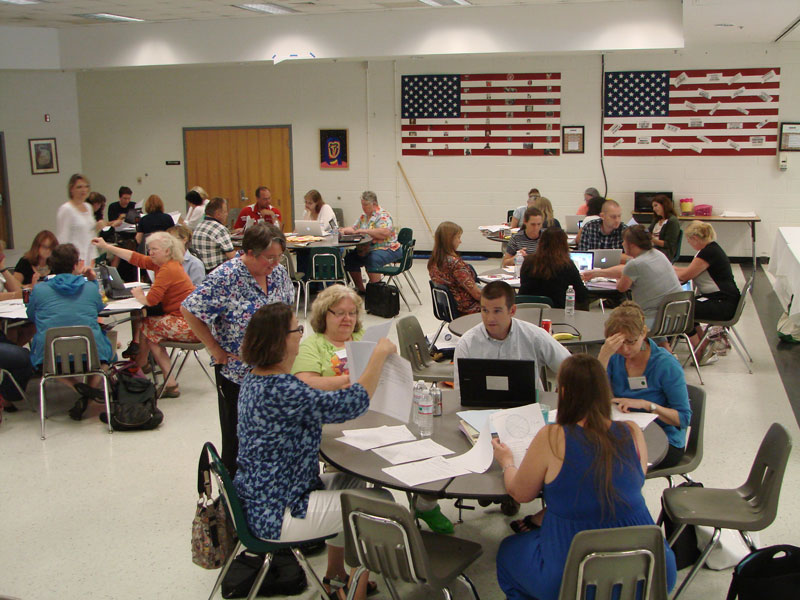 In Albemarle County Public Schools, the current debate is not about whether there’s too much standardized testing; it’s about which test is most effective.

While the state stands behind its Standards of Learning exams, Albemarle wants to move towards a new national test of student assessment at the high school level. This comes at a time when the SOLs are getting tougher and scores are expected to decline.

Since the spring of 2012, the division has been piloting with freshman and seniors the College and Workforce Readiness Assessment, a task-based method of assessing learning that tests critical, analytical and creative thinking skills.

“A CWRA test is exactly a match with what we’re trying to do in the classrooms,” says Albemarle spokesman Phil Giaramita, “which is more emphasis on getting students to do their own research, work in teams and come up with solutions to problems.”

Albemarle administered the spring 2012 test to 40 high school students and has expanded that number each semester. This fall approximately 330 seniors will take the test.

“The idea is to expand it every year in spring and fall and try to learn more about [the students’] experiences,” Giaramita says. “Eventually we’d like to go to a system in which all [high school] students are taking a CWRA-type test.”

At the heart of the pilot is a feeling that the SOLs aren’t challenging enough, that businesses say students are not prepared for work, and that they don’t measure the range of skills Albemarle hopes to promote in its graduates.

“I think there has been a realization that the SOL hasn’t been preparing the students for success, and that was reflected routinely in Albemarle schools scoring high across the board,” Giaramita says. “The alternative assessments measure creativity, innovation in [the students’] thinking and how well they communicate in writing.”

Developed by the Council for Aid to Education, CWRA is one brand of alternative assessment that school systems use to measure skills that might otherwise go unnoticed by state-mandated assessment methods, such as the SOL.

One aspect of the CWRA that Albemarle values, Giaramita says, is the way in which the test’s questions force students to pose creative solutions to real-world problems.

“One question is ‘imagine you’re a mayor and crime is a problem,'” Giaramita says. “In that kind of scenario, the student would have to look at statistics that are relevant to reducing crime, then write an essay that says how he or she would reduce crime.”

The CWRA is given nationally to high school students and to college freshmen, so Albemarle feels that the ability to compare student scores across the county is a value added. Because the SOL are state tests, currently Albemarle can only compare itself to other divisions in the Commonwealth.

At the June 13 School Board meeting, Albemarle Assistant Superintendent Billy Haun reported that County schools will see a drop in Science and English SOL scores this year due to updated SOL tests that are more challenging.

Every seven years, the Virginia Department of Education is required to review and revise its SOL tests, if necessary, and VDOE Director of Communications Charles Pyle says these revisions indicate that the state has raised its standards.

“The SOL program is by no means static,” Pyle says. “The standards [of the new tests] are more rigorous, and the tests are more challenging.”

And while Pyle admits that the state tests have been updated to reflect concerns about their emphasis on multiple choice questions and a lack of questions that prompt higher-order reasoning skills, he doesn’t think content knowledge is insignificant.

“I would say that even our multiple choice [questions], to the extent possible, require our students to think critically,” Pyle says, “but content is important. How do you write analytically about the American Revolution if you don’t know anything about it?”

Moving forward, Albemarle plans to engage the VBOE, the Virginia State School Board and state legislators to seek legislation that would allow high-performing divisions to adopt alternative assessment methods like the CWRA. In the January 2013 General Assembly session, Delegate David Toscano introduced a resolution requesting a study of alternatives to the SOL but that resolution failed to make it out of committee.

“We’re not at a point where we’re saying ‘lets’ get rid of the SOL,’” Giaramita says, “but let’s start looking at alternatives. There might be a better system designed to assess how prepared kids are to meet the needs of the workforce.”