Affordable living choices for our community 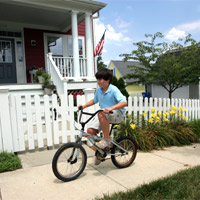 By now it has become the conventional wisdom that police, teachers and firefighters who work in Charlottesville and Albemarle County have a hard time finding an affordable place to live. In fact, the high cost of living presents housing and transportation challenges for many local workers.

“Based on average income we have a lot of employees that are unable to live in the area,” says Kimberly Suyes, the Director of Human Resources for Albemarle County. Forty percent of the 3,000 employees she’s responsible for, which includes public schools, say they can’t afford to live within Albemarle County. Based on their salaries, they can only afford a house under $150,000, and there only a handful such properties on the market in the city or the county.

In a search for solutions, the Piedmont Housing Alliance and the Charlottesville Area Association of Realtors (CAAR) held a one day conference at the University of Virginia. Participants heard from area housing officials and experts, as well as experts from outside the region.

Local Realtor Jeff Gaffney served as the chair of a task force put together by CAAR in 2003 to study what would be done to address the problem.

“The real wage of the workforce tends to go up annually three to four percent and the price of real estate in our area has been going up annually in double digits, sometimes twenty percent,” he said.

The median home price in Charlottesville is $250,000, and $290,000 in Albemarle County. These economic pressures are forcing many people who make $40,000 a year to move further and further away to buy a house. The task force discovered that many school teachers and police officers were driving forty-five to sixty minutes to work.

“When our workforce cannot afford to live in the area where they serve, it can lead to the decline of economic vitality of a region because what you’re really defining is the equation for sprawl,” said Gaffney.

The Workforce Housing Fund created by CAAR is designed to help first-time home buyers pay for their down payment. Gaffney predicts the fund will cross the five hundred thousand dollar mark this year.

“We’re going to lend a schoolteacher twenty thousand dollars on down payment assistance. She’s not going to make any payments. When they sell the house, they’ll repay the loan plus a small percentage of interest, so that goes in the kitty for the next applicant,” said Gaffney.

Delegate David Toscano of Charlottesville says part of the solution is to help subsidize affordable housing, but he says that will require a change in mindset.

“If we start to begin to see workforce housing as part of the infrastructure we need to build in order to create livable communities, we’ll realize and be able to justify the putting in of subsidies to help people afford to get into homes.” He says the problem is too complex to be tackled with a market-only approach.

But, that approach alarms Bryant Applegate, the Director of the U.S. Department of Housing and Urban Development’s Affordable Communities Initiative. Applegate says trusts and subsidies are part of the puzzle, but he says regulatory reform is the key.

“Regulatory barriers such as density, outdated building codes, duplicative reviews, time delays in the permitting process, extra requirements on affordable housing developments, excessive fees, and gold plated subdivision regulations can add as much as 35 percent to the cost of a house.”

Applegate also urges the use of density bonuses to promote affordable housing. Increasing unit density can help, and the price of condominiums tend to be less. Nationwide, HUD is holding a National Call to Action to inform citizens about regulatory reform.

Susan Dewey, Executive Director of the Virginia Housing Development Authority , says her organization sees the problem as one caused by a lack of supply, causing demand to go through the roof. She would like to see local governments integrate their economic development, education, and planning policies with a housing strategy.

“We’ve got to start bringing all of those together, because housing is one of those fundamental needs,” said Dewey.

VHDA is charged with helping people find a way into an affordable home, even in difficult areas. They can do so because offering below-market interest rates to first-time homebuyers. In Charlottesville, they assist with down payments through their Homestride program.

Other Virginia localities are trying innovative solutions. For instance, Arlington County has a Workforce Housing Initiative, a public private partnership that combines flexible mortgages, home ownership counseling, and discounts on property. Dewey says the county also has a “Live Near Your Work” initiative that provides a $5400 loan to eligible school officials.

“If you think the workforce housing for purchase problem is bad now, just wait. It’s going to get worse. And I should follow that up by saying it’ll get worse before it gets better, but it’s not going to get better.”

Lucy says the rental market in the Charlottesville MSA is holding steady with the cost of living, and he says that the nation’s housing goals and priorities need to be reconsidered.

Jamie Spence with Churchill Homes, a company formed in 2001 that is currently building several units of affordable housing priced at $175,000. To qualify, the prospective home buyer cannot have a household income greater than $47,800.

“Your two-income households are pretty much eliminated,” said Spence. The company sets aside a certain number of lots for workforce housing in its new developments.

“We decided personally as a company that it was something that we believed in, and because we’re doing the whole project, we really didn’t adjust lot pricing as you might do in other places. The price is significantly lower for those townhouse lots than they were for the market ones, probably $25,000 in market rates, and at the same time we said we’re not paying commissions, we’re not paying any of the developer fees, we’re not paying any of the marketing. That basically this is something that everyone needs to pitch in on.”

Spence says these units will bring Churchill a marginal profit.