Is affordable housing available in “The best place to live in America”?

An in-depth report on the affordable living choices in our community.  By Charlottesville Tomorrow’s Fania Gordon

In their operating budgets for Fiscal Year 2008-09, the City of Charlottesville dedicated $1.61 million and Albemarle County dedicated $2.04 million to assisting with affordable housing in the community.  In addition, Charlottesville has allocated another $220,000 from the Charlottesville Housing Fund during the current year.

There are many causes for the local shortage of affordable housing and local governments and organizations have different ideas about the best solutions.   This report sets out some of the basic definitions that are necessary to understand the affordable housing problem, identifies the local agencies working to fix it, and outlines how local money is being spent to address affordability in the area.

AFFORDABILITY AND INCOME
Housing affordability is determined by the percent of a household’s income spent on housing.  The U.S. Department of Housing and Urban Development (HUD) recommends that a household pay no more than 30% of its income for housing and housing related costs such as homeowners insurance and utilities.  Households that pay more that 30% considered cost burdened. 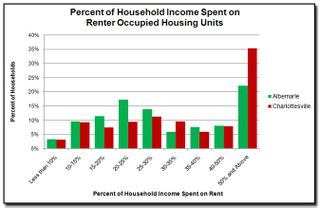 Housing affordability numbers are determined by income levels for the metropolitan statistical area (MSA).  The Charlottesville MSA consists of the City of Charlottesville and Albemarle, Greene, Fluvanna and Nelson Counties. According to HUD, a family of four in the Charlottesville MSA earning the area median income (AMI) of $68,500 should pay no more than  $1,712 each month for housing related expenses.  The AMI varies depending on household size .

In order to identify the number of community residents that are cost burdened by their housing expenses, statistics from the American Community Survey and National Decennial Census can be examined.  However, census data regarding rent as a proportion of household income is skewed in Albemarle and Charlottesville because it includes UVA students’ households which have low incomes but may receive assistance paying rent.

However, the problem of a shortage of affordable housing is more complicated than examining incomes and ensuring that an adequate number of units exist for households at each income level; it is not only people who qualify as “low income” that try to save money on housing.  Since people with higher incomes and University students look for inexpensive housing within the City and there are a limited number of affordable rental units, low-income earners have to spend a higher portion of their pay on rent in order to be competitive in the rental market.  The situation has been exacerbated by the slowdown in the housing market; as the demand for rental units grows, rental prices within the City and County are increasing while unemployment is on the rise and salaries are staying the same or decreasing.

WORKFORCE HOUSING
In 2000, 6,133 people came to work in Charlottesville and 9,160 workers came to work in Albemarle County every day from Louisa, Greene, Nelson and Fluvanna Counties according to the TJPDC’s State of Housing Report.  Housing activists have attributed this high commuter volume to the shortage of affordable housing for people who work in Albemarle and Charlottesville area, many of whom fulfill necessary community functions such as teachers, firefighters and police officers.

As the cost of living continues to increase, people are moving across county lines where homeownership and rental costs are less prohibitive than in Albemarle and Charlottesville.  Fluvanna and Greene Counties have their highest population densities directly across the county line and close to the major highways that provide access to Charlottesville and Albemarle.  (See Map 1) The high volume of workers commuting into and out of the area every day contributes to traffic congestion, leads to increased spending on road expansion projects and leads to diminished local air quality due to pollution from car exhaust.

Many workers who are vital to the community compete for a limited number of affordable units.  According to the Thomas Jefferson Planning District Commission Housing Analysis, entry-level firefighters and police officers could only afford 129 of the single-family homes and 42 of the condominiums sold in the Planning District between 2004 and 2005.

The Charlottesville Areas Association of REALTORS (CAAR) created a Work Force Housing Fund to assist those people who serve essential community functions to purchase homes near to where they work.  The Fund is based at the Charlottesville Albemarle Community Foundation and administered by the Piedmont Housing Alliance.

$95,546 for the Albemarle Housing Improvement Program (AHIP) that assists low income City residents who need to make improvements to their homes, in order to rehabilitate them.  AHIP counsels city residents on improvements, taxes, legal matters and credit.

$142,106 for the Piedmont Housing Alliance (PHA) to towards housing and community development opportunities.

Another initiative outside the operational budget is the Charlottesville Housing Fund. According to Charlottesville Mayor Dave Norris, the fund was capitalized with $2.15 million in FY2007-08 and another $1.4 million for the Fund was included in the FY2008-09 Capital Improvement Program. The final decisions regarding how these funds will be allocated are expected by May of 2009. As of March 27, 2009, $220,000 from the fund has been allocated in FY2008-09. According to the City, $2.6 million was allocated the year before with the largest amount received by Dogwood Housing ($850,000).

According to Charlottesville’s adopted budget, the “mission of the Fund is to meet the housing challenges facing our residents by dedicating, consolidating and expanding financial support for the preservation and production of affordable housing in our community.”

Some of the types of projects for which the Charlottesville Housing Fund can be used include:

Additionally, according to Mayor Norris, in FY 2008-09, the City agreed to designate $1 million of the $4 million from the economic development Strategic Investment Fund to create a revolving loan program to encourage the development of new mixed-use projects that include affordable units.  As of March 27, 2009 there have been no applications for this low interest loan . 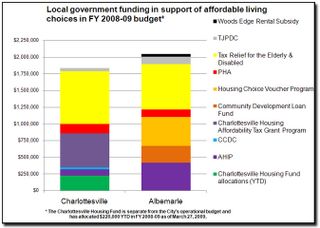 Both AHIP and PHA use that money to leverage other state, federal and private funds and 480 families with rental assistance.

$435,928 for the Housing Choice Voucher Program

$250,000 for the Community Development Loan Fund

Through the Housing Choice Voucher Program (otherwise known as Section 8 vouchers), Albemarle County assisted more than 480 families with rent payments in 2007.  This totaled over $2.5 million in federal money paid directly to private landlords.    Additionally, through the Homebuyer Assistance Program, Albemarle County works with the Piedmont Housing Alliance to help first time homebuyers with down payment or closing costs.    In 2007, the Homebuyer Assistance Program leveraged funds and mortgage financing from the Virginia Housing Development Authority and dispersed 38 loans to first time homebuyers.  County funding made up 11% of the expenditures for affordable housing with the balance coming from the state, federal government and private sources.

Albemarle County was awarded a $700,000 Community Development Block Grant (CDBG) in 2007 to assist with rehabilitation and preservation of existing affordable units and construction of 38 new rental units for low-income elderly residents.  Furthermore, the revised Zoning Ordinance provides density bonuses for developers provided half of their additional units meet the County’s definition of affordable housing. 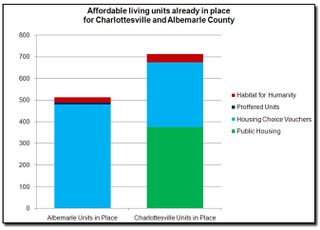 Albemarle County defines proffers as “voluntary offers by a landowner to perform an act, contribute money or donate land in order to mitigate the impacts of new development that result from a rezoning.” The Albemarle County Affordable Hous ing Policy sets forth the goal that at least 15% of all units developed under a rezoning or special use permit should be proffered as affordable housing for those making 80% of the AMI.  Alternatively,  the developer may contribute cash to the County to support attainment of affordable housing goals.  In their report, the Affordable Housing Joint Task Force recommended that the County restructure this target to specify that affordable housing be included for those in the extremely low, very low, and low income categories.

Since the Affordable Housing Policy was adopted in 2004, 1,622 affordable units have been proffered.  While nine proffered units have been completed, seven are under construction and twenty-five are in the final site plan review stage.  When these proffered  units are completed, the housing stock in the County that is affordable to families making 80% of the AMI will be dramatically increased. 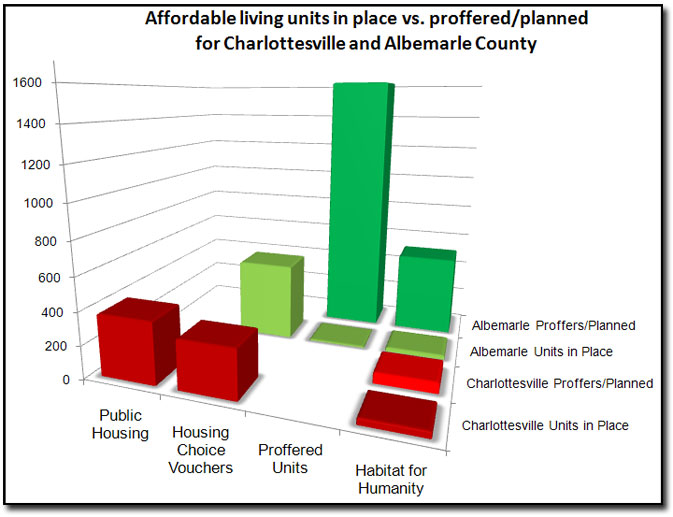 These proffered units are required to be affordable to residents earning 80% of the AMI and are generally intended for purchase whereas public housing is generally directed at families earning incomes at or below 30% of the AMI.

COMMUNITY LAND TRUSTS
In the fall of 2008 the Thomas Jefferson Community Land Trust nonprofit was incorporated with the support of the TJPDC. Community Land Trusts (CLT) aim to make private homeownership more affordable, allowing individuals to build wealth.  A CLT acts as steward of the land, owning it and leasing it out to homeowners therefore allowing individuals to purchase homes without purchasing the land upon which they are built, ensuring long term affordability.  Seventy-five percent of the homes on Thomas Jefferson CLT owned land will be targeted to households earning below 80% of the AMI and the household income would be capped at 120% of the AMI.

CONCLUSION
In October 2008, the Charlottesville Albemarle UVA Joint Task Force on Affordable Housing presented its draft recommendations to the Albemarle and Charlottesville Planning Commissions. The main recommendation of the task force was for the establishment of a committed, permanent, dedicated source of annual affordable housing funds from the City and the County outside of their existing operating budgets.  In preliminary discussions it was suggested that UVA should dedicate annual funding to affordable housing projects in the area, however, University officials deemed this type of dedicated funding to be outside of the mission of the University.

On January 22, 2009, the Task Force released their final report with specific recommendations on what is needed in order to address the region’s affordable housing problems.  The Task Force agreed that increasing local funding in order to leverage other funds should be the top priority of Charlottesville and Albemarle.  They recommended that proffer policies be revised to address long-term affordability and ensure that existing units remain affordable.  The Task Force further recommended that the Human Resource Departments of the City, County and University develop standards for establishing a local living wage for employees and contracted workers whenever possible.

The Joint Task Force presented its recommendations to the City Council on February 2, 2009, the County Board of Supervisors on February 11, 2009 , and the Planning and Coordination Council, representing UVA, Albemarle and Charlottesville on February 19, 2009 .  While none of the recommendations were immediately adopted by any of the bodies, the Board of Supervisors asked for more information on implementing some of them, specifically deed restrictions which would require that affordable units remain affordable after their first sale.  James City County mandates deed restrictions on affordable units that are then monitored by the developers, preventing the burden of monitoring from being placed on planning staff, according to Ron White, Albemarle’s Chief of Housing.

Additionally, City Council and the Board of Supervisors expressed interest in pursuing federal funding for development of single room occupancy units (SROs) to address the needs of extremely low income individuals within the City where they could have excellent access to public services.