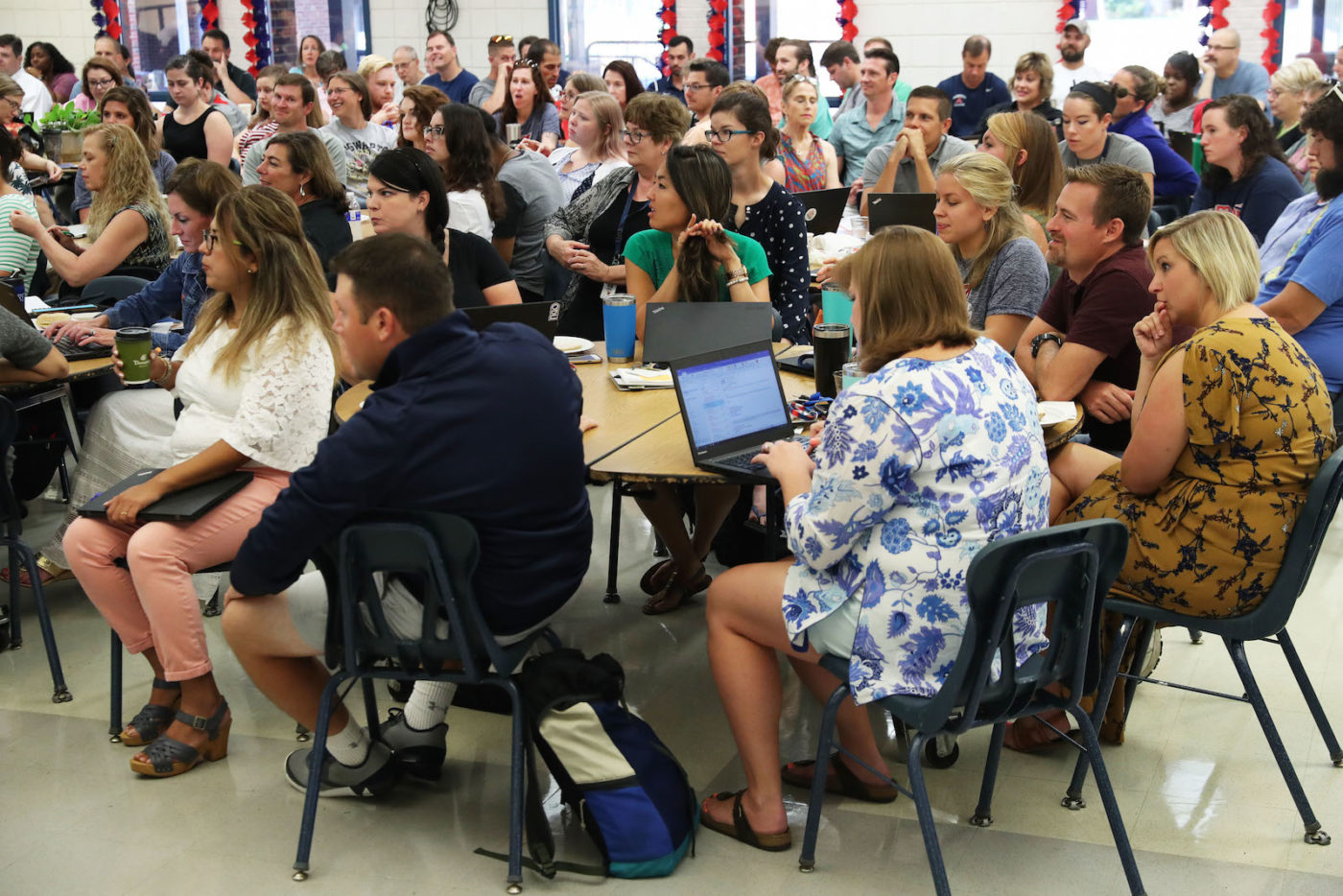 Teachers at Albemarle High School attend a teacher development workshop focused on interacting with students from diverse backgrounds on Wednesday.

CHS professional development focuses on city's racial, ethnic history'This is home'Coding for students of color
Area’s high cost of living contributes to short classroom stints
The first time LaNika Barnes had an African-American teacher was in middle school. The teacher, Mr. Vines, saw that the school’s students of color were not being placed in advanced math and science classes, and he pushed his students to take them.
“My first dream job as an elementary school student was being an astronaut, but I had never seen a black female astronaut,” Barnes said. “Because of him, my first female science teacher and, of course, my family, I realized I could be whatever I wanted to be.”
Over time, Barnes’ career goals shifted to becoming a science teacher. She already had begun a career as an academic adviser and needed to take several assessments and complete a certification program to become a teacher.
“It can definitely, for a lot of people, be cost-prohibitive. For example, people in my situation, being a career switcher and you have family, you can’t really stop working in order to go and physically sit in a class,” she said.
Barnes first heard about the African American Teaching Fellows program from teachers at Albemarle High School, where she hoped to teach.
AATF offers financial support and networking to black teachers pursuing certification. In return, it asks its fellows to teach in Charlottesville or Albemarle County public schools for three years.
“There is a lack of teacher diversity in K-12 schools,” said Tamara Dias, executive director of AATF. “We believe that all students from all backgrounds, especially African-American students, need to have role models that reflect the diversity that we see in our community and in the world.”
Barnes, who is entering her second year in the program, said she hopes to continue being a classroom teacher until she retires, “if the county will have me,” she said, laughing.
If Barnes does stay, her increasing experience will help her students — and will save the county the cost of recruiting, hiring and training a new teacher. A 2007 study by the National Commission on Teaching and America’s Future estimated that teacher turnover costs the U.S. $7.3 billion a year.
Albemarle’s teacher retention rate for the 2016-17 school year was about 90 percent. This is higher than the national average, which has hovered around 84 percent since 2000.
Dias said salary plays a role in the local turnover.
“A lot of our first-year fellows find that they can’t actually afford to live in Charlottesville without a roommate, and that part is a shock to a lot of them,” Dias said. “A lot of them finish with master’s degrees, and they think that because they have these master’s degrees that they will be able to come here and start their life.”
In Albemarle, starting pay for a teacher with no experience and a master’s is $48,580. The comparable pay at Charlottesville City Schools is $48,719.
The median household income for Charlottesville-Albemarle is $89,600, according to the U.S. Department of Housing and Urban Development.
Another key factor, according to retired University of Virginia education professor James M. Cooper, is how prepared teachers are before they enter the classroom.
Of the 130 teachers who left Albemarle public schools in the 2016-17 school year, 40 percent had taught in the division for fewer than three years.
AATF offers additional training to their fellows based on what teachers say they need.
“I was involved in an education Twitter chat, and I saw teachers share that, during the day, they’re so busy that they don’t even have time to go to the bathroom,” Dias said. “Even those small things, in terms of self-care, teachers will feel guilty about.”
To meet that need, Dias offered a one-day session on self-care to AATF fellows during their annual summer institute.
Barnes said the class reminded her to read books for pleasure, not just those related to their curriculum.
“[The library] is my second home, after my classroom,” Barnes said. “I come here a lot and check out books and chitchat with the librarians.”
Such self-care techniques can be particularly important for nonwhite teachers.
“It’s difficult to teach in a climate sometimes when you are the only person that looks like you, which is one of the reasons why AATF was established,” Dias said.
Barnes said she appreciates that AATF reminds the fellows that, as black educators, they are capable and not alone. This is part of why Barnes tells her students they can say that their teacher is black and female.
“AATF provides a platform for the community to see that there is black excellence in the community, and that we are capable and ready to teach all children,” she said.