After 25 years of service, Toscano says he’s not done yet 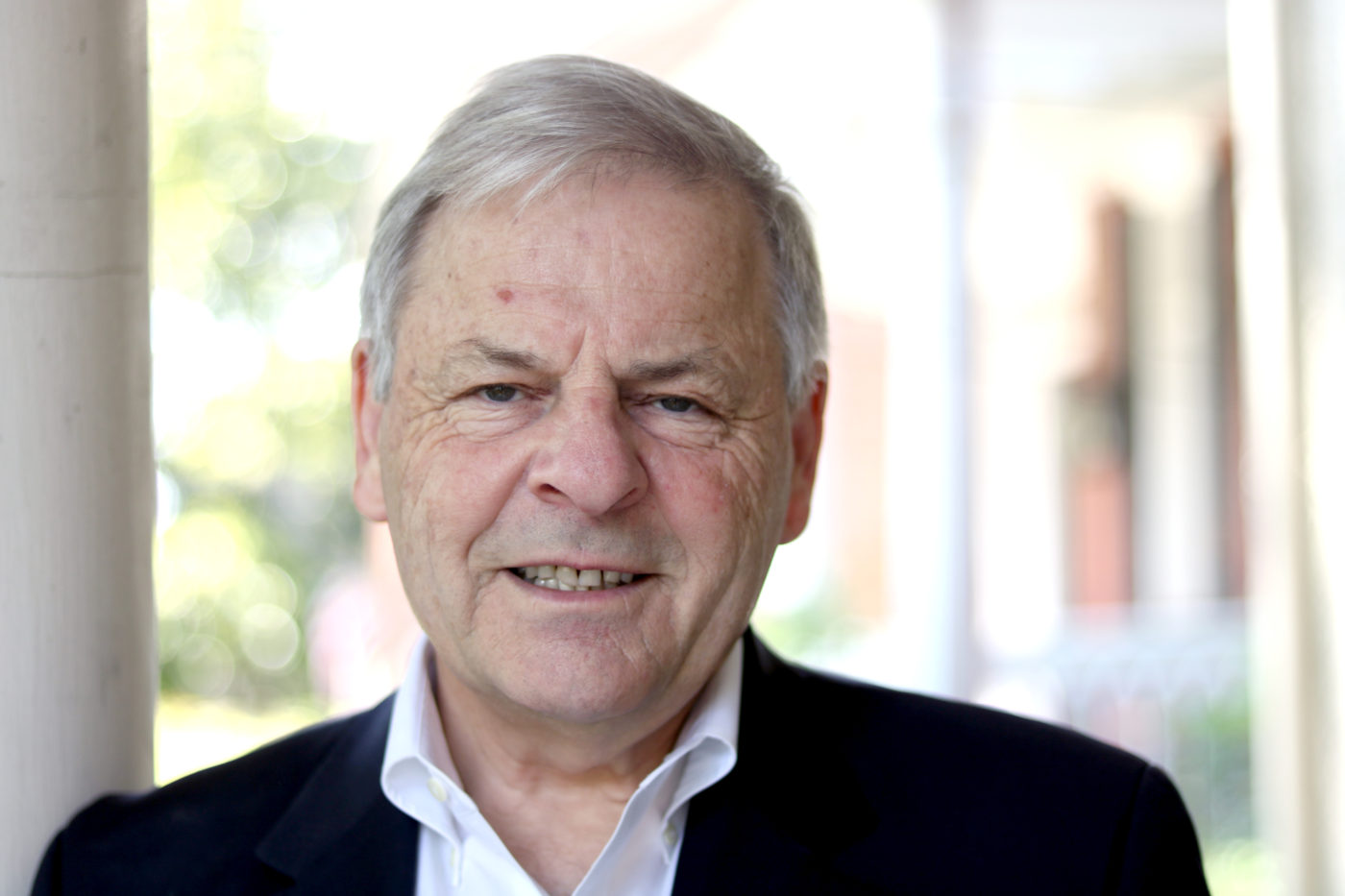 Del. David J. Toscano, D-57th, is stepping back from state politics for now, but he’s in no way a retired man.

“One of the things that’s really hilarious is that people think that I’m retiring,” the former House minority leader said. “I’m retiring from the General Assembly, but I’m not retiring from my law practice,” Buck, Toscano, & Tereskerz in Charlottesville.

He is also writing a book.

“It’s about 25 years in public service,” Toscano said. “It has elements related to policy, how policy gets developed. Politics, how elections have been won. And personalities, the various different people you come in contact with in that period of time.”

He also wants to write about public issues around the country as they apply to states. He said more and more people have a tendency to focus on national issues while a lot of action is happening at the state level.

“We are seeing the nationalization of state politics. We’re seeing the nationalization of local politics. People tend to vote now on the basis of a party, without really looking at the candidates and what they stand for,” Toscano said. “I think one of my roles is to try to educate people on what’s important in state matters and how they can understand and participate in telling their reps what they think ought to happen.”

Before representing the district in the House of Delegates in Richmond, he served on the Charlottesville City Council and as mayor.

By 2002, Toscano had left his seat on the City Council and refocused all of his attention on practicing law. However, in 2005 Toscano learned that Mitch Van Yahres, who had represented the 57th District for over two decades, would not seek reelection.

“I had always thought that if he retired I might try to seek that seat,” Toscano said.

“I’ve been doing this now for 14 years in the General Assembly and a quarter of a century doing elected service,” Toscano said. “At some point, you know it’s just time. We’ve gotten Medicaid expansion done. A new redistricting process seems to be on the horizon. I thought that it might be good to give some other people an opportunity to contribute. It was just time to do it.”

Reflecting on his time as a state delegate, Toscano has been proud of some legislation he’s passed, contributed to or voted on.

“Ironically, one of the things I am most proud of was a bill that I got passed in the first session I was there. It actually wasn’t my bill,” Toscano said. “It was a bill that reformed the entire adoption process in Virginia. When it got to my committee, there weren’t a lot of people who knew much about adoption.”

The topic was one of great interest and knowledge for him, and the committee tasked the freshman delegate with rewriting the bill.

“That changed the way adoptions were done in Virginia in order to increase the number of youngsters who could find good families. That was a big change, and to do it as a freshman delegate was one of the highlights of my entire time in the General Assembly.”

He also cites Medicaid expansion as one of his most consequential votes. He was also pleased to have played a role in flipping 15 House seats to the Democratic Party in 2017.

“Getting within a whisper of the majority was a huge accomplishment that I am proud of because, as leader, I worked very hard not just to recruit candidates who ran, but also put resources behind them so that they could win.”

Toscano said that he had wanted to help elect now-Del. Hala Ayala, D-51st, since about 2013. She went on to run and win in 2017. According to the Virginia Public Access Project, the House Democratic Caucus, of which Toscano is a member, donated over $40,000 to her 2017 campaign.

“There were a whole host of other people like that who we either recruited or encouraged to run,” Toscano said. “In the aftermath of the Trump election, people really got energized. A lot of people got interested who hadn’t participated in politics much. A lot of those won.”

He also highlighted that he is leaving a more diverse House than he entered in terms of race, gender, religious background and political ideology. 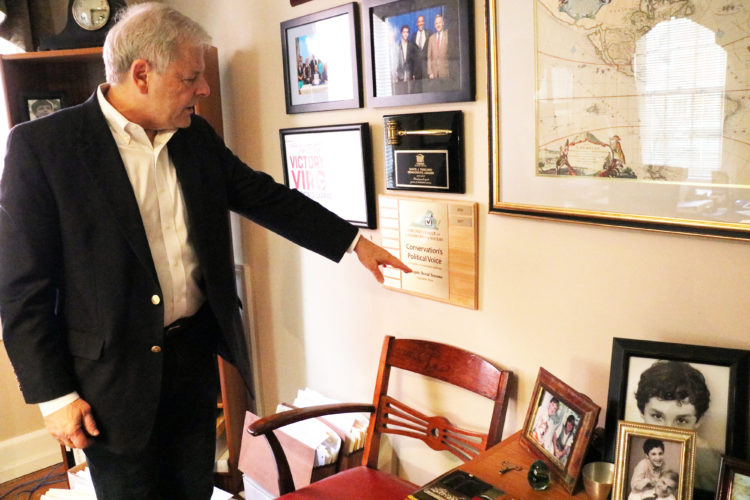 Charlotte Rene Woods/Charlottesville Tomorrow Del. David J. Toscano, D-57th, talks about the memorabilia he has already brought from his Richmond office to his Charlottesville law office. He was recognized for being a political voice for the Virginia League of Conservation Voters.

Toscano also has hopes for things he worked on in past sessions to eventually succeed, such as the Equal Rights Amendment, gun reform and enhancing the renewable energy sector in the state. He said there needs to be more emphasis on the storage of energy and less emphasis on generating more fossil fuel-based energy.

Proposals regarding war monuments, such as the Confederate statues in Charlottesville that drew white supremacists to rally in the city in 2017, have failed, however.

“I hope we give authority to local governments to be able to control statues in their public spaces,” Toscano said. “I’ve been working on that one for a couple of years, and it’s not getting out of subcommittee.”

However, he stops short of supporting a full repeal of the Dillon rule, saying that allowing the state to exercise power over local decision-making can be appropriate at certain times.

“Any time you’re a local elected official, you constantly talk about the Dillon rule and how it prevents you from things you might otherwise want to do,” Toscano said. “I did that when I was the mayor and when I was a city councilor. But sometimes the Dillon rule can be a good thing.”

As an example, he cited stormwater regulations.

Both of Toscano’s potential successors have weighed in on the Dillon rule. University of Virginia professor Sally Hudson said she would like to see Virginia pursue a path toward Home Rule, but she sees ways to work within the Dillon rule.

“On balance, I think it’s better for states to give local leaders freedom to tailor policy to local needs and use statewide regulations to set guidelines, as needed,” Hudson said in Charlottesville Tomorrow’s voter guide. “Absent a wholesale shift to Home Rule, I’d especially like the General Assembly to grant localities more autonomy over local zoning and wage regulations so we can develop the housing and job opportunities our community needs.”

While City Councilor Kathy Galvin is in favor of more local autonomy on several things, she supports the ability of the Dillon rule to regulate cross-jurisdictional standards for things like education, transportation and environmental protection.

“Localities should have more autonomy, especially when dealing with the challenges of structural inequity and public safety,” Galvin said in her questionnaire.

Toscano has officially endorsed Galvin as his successor. He joins several former Charlottesville mayors and local officials in doing so.

“Listening, collaborating, doing your homework, respecting your colleagues [even those you disagree with] and being an authentic representative of the people you serve, those are the traits I most associate with David,” Galvin said. “I am honored and excited to have the support of such a consequential member of our community. David’s leadership has been invaluable to our community, and while I sincerely regret that he will no longer be representing us in the House of Delegates, I look forward to continuing his legacy.”

Meanwhile, Hudson has rallied support from other Charlottesville officials, state delegates and a variety of state and congressional candidates.

“David embraced the role of delegate as a teacher. He empowered people with an understanding of how Richmond works so that we can all be more engaged citizens and effective advocates,” Hudson said of Toscano’s tenure in the General Assembly. “We’re blessed with such an engaged community here in the 57th [District], and I’d be honored to continue that tradition.”

The Democratic primary is June 11.