After a lifetime of persecution, a Guatemalan asylum seeker may finally be safe here in Charlottesville 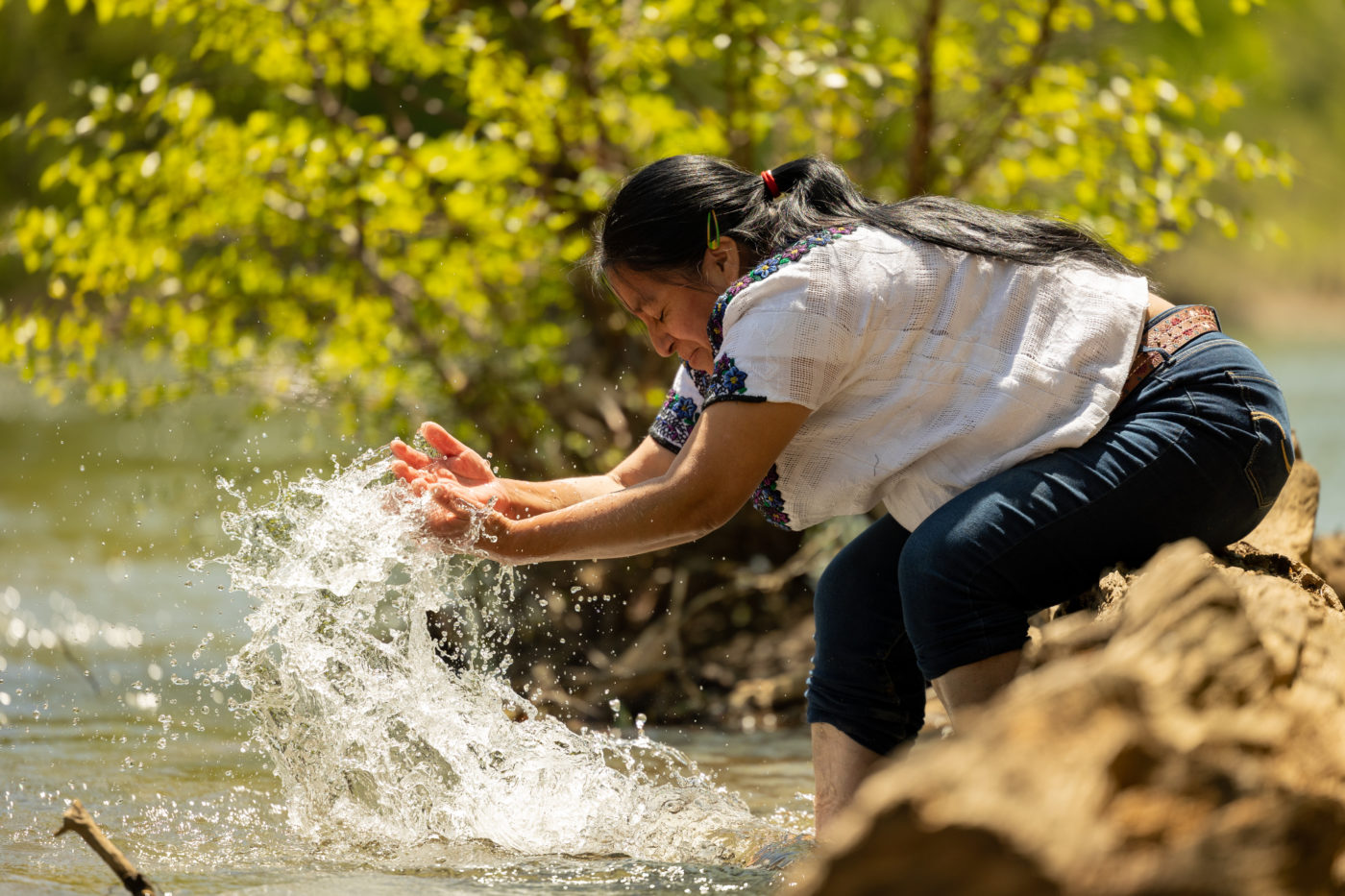 Maria Chavalan Sut visits the river for the first time in two and a half years after the U.S. Immigrations and Customs Enforcement grant her a Stay of Removal in her deportation proceedings.

Maria Chavalan Sut was 7 years old when her family fled for their lives from the Guatemalan army.

It was the early 1980s, and the army was systematically killing the country’s Indigenous Mayan people. Guatemala was in a civil war. The government thought it could end the fighting by exterminating the civilian communities where guerilla insurgents lived.

The army had started killing people in the community where Chavalan’s family lived.

“My papá wasn’t with us,” Chavalan said, speaking in Spanish. The wealthy landowners “recruited my grandpa and my papá for forced work in their ranches. My mamá, I don’t know how, she found my papá on the ranch.”

Chavalan remembers her father gathering up the family to flee.

“That night, I’ll never forget, because we were staying in a house and the army passed by very close,” Chavalan said. “They were going to kill us.”

Chavalan and her family fled deep into the Guatemalan mountains. For three years, they eked out a meager living on the mountainside in order to hide from the army.

For Chavalan, it was the beginning of what would become a lifetime of fleeing and hiding — first from the Guatemalan army, then from racist Guatemalan groups and finally from the U.S. Immigration and Customs Enforcement.

In 2016, after yet another threat was made on her life, Chavalan fled once again — this time to the United States. She arrived at the border seeking asylum. She was denied.

She feared she would be killed if she returned to Guatemala. So, for the last 2½ years, Chavalan has been hiding a small Methodist church in Charlottesville while she and her lawyer attempted to fight her deportation order.

Now, her days of hiding may finally be over. Last month, ICE issued Chavalan a one-year Stay of Removal.

The stay does not mean she’s been granted asylum — nor does it guarantee she will be. But it is a promise from the government that it will not deport her for at least one year. It gives her time to challenge her deportation order. And it allows her — for the first time since October 2018 — to leave the Wesley Memorial United Methodist Church.

Her first wish: to see the river.

“After 925 days at the church, I can finally step out and enjoy fresh air and the wonders of nature without fear of being deported into the hands of executioners,” she said. “I thank God and I thank each one of the good people in the United States, in Charlottesville and at [the church] who received me with generous hearts and continue to support my application for asylum here. I ask God to bless them and attend to their needs as well as mine.”

Chavalan’s arrival at the church came at the end of a long road of fleeing.

During the Guatemalan Civil War, she lost family, witnessed massacres and endured forced labor that she now finds difficult to talk about.

The atrocities didn’t end with the war. For years after, intense — often violent — racism continued. And it continues to this day.

As a young woman, Chavalan had to move often to avoid persecution that could easily turn deadly. She reinvented herself time and again. During a time, she was a children’s mathematics teacher. Then she went to school to become a nurse. But the pay wasn’t enough to support her family, so she took a job at a shoe factory instead.

All the while, danger was never far. And in 2016, she was threatened in Guatemala for the last time.

A group of Guatemalans demanded Chavalan give up her house in Guatemala City. She refused, so the group set fire to it in the middle of the night while she and her children were asleep inside.

“We explain it as gentrifiers,” said Alina Kilpatrick, Chavalan’s immigration lawyer. “But throughout Guatemala, the land rights of indigenous peoples aren’t recognized, so if you don’t willingly sell or give up your land, then you are subject to terror.”

Because she survived the fire, the threat on her life continued. So she ran to the United States.

Chavalan won’t talk about the trip. It was too traumatic for her to willingly relive. Neither will she speak about her children still in Guatemala. They are still in danger.

“With each step there is so much violence, violation and so much fear,” Chavalan said, her voice just above a whisper. “It’s not easy. So much fear, so much fear. They kill us. I don’t know, I don’t understand why. But God always saves me.”

She had hoped that her life would become easier when she arrived in the U.S. It didn’t.

Once she arrived at the border, she was detained by ICE in a small detention center with dozens of other people all sharing a single bathroom. It was terribly cold, she said. And the stories of what had happened to those who had been there before were terrifying.

Because she came as an asylum seeker, ICE officials gave Chavalan a notice that she must appear in immigration court to litigate her petition. But none of the documents officials gave her listed a court date.

For nearly two years, Chavalan tried to find her court date. She called the hotline ICE had provided several times and went four times to the ICE office to inquire. She never got an answer.

From there, ICE put Chavalan on its Intensive Supervision and Appearance Program. She was given an ankle monitor and required to be present for random check-ins from ICE agents.

But the supervision was traumatic, and brought back old fears of looming officials, she said.

On a practical level, the ankle monitor regularly malfunctioned or needed a battery change — and when that happened it would beep loudly and incessantly, she said.

The device itself was hot, she said. It burned her skin and killed a nerve in her leg.

“It’s made by the devil,” Chavalan said. “Everyone who wears one has swollen veins or injured nerves. It’s a torture.”

What’s more, Chavalan felt overwhelmed by the constant check-ins — fearing that any misstep would lead to a deportation.

In the end, it was more than she could bear.

She fled, once again. How she arrived in Charlottesville is another story she won’t tell.

Chavalan continues to live in the Wesley Memorial United Methodist Church. She cannot work, but she provides authentic Guatemalan meals for order. People can provide donations for the food to the church, should they choose. The money goes toward Chavalan’s upkeep.

Chavalan is also a seamstress and a gardener. She’s planted a new garden on the church ground that she will use in her cooking.

And she and her attorney continue to fight for asylum.

“I’m a survivor of war, I’m a survivor of massacres, army projects to take out my community. And now I have ICE,” she said. “But I have hope because I have faith in God, and I’m here in the church.”