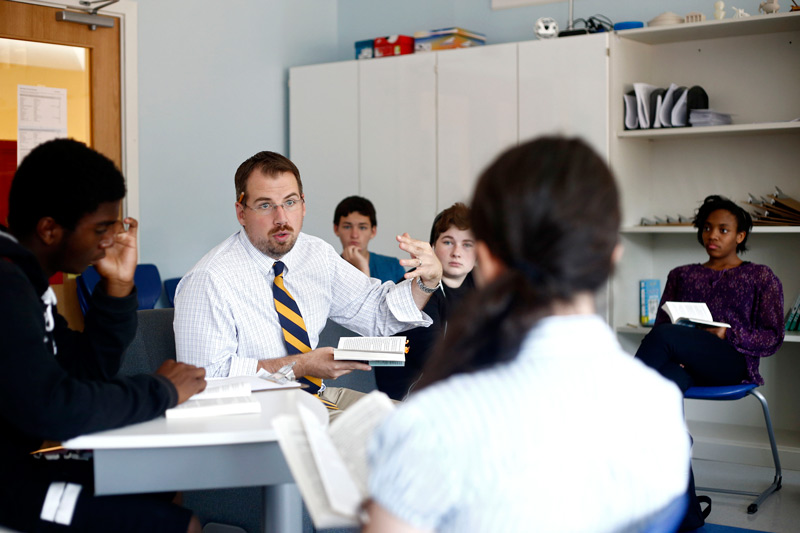 For 65 Albemarle High School freshman, the word “school” carries a different meaning than it did just a few months ago. Once meaning a place where they struggled with academic work and often felt disenfranchised, a new instructional model combining math, science, history and English into one class has students whistling a new tune about school.

“In middle school, I would go to all of my academic classes and I would not be excited — in fact, I hated it,” said Ireland Missig, a student in the program. “But these teachers are so excited, they’re so happy, that since I’ve been here, I come to my classes smiling … and actually wanting to learn.”

Selected to participate in Team 19 — named for the class’ graduation year — these ninth-graders will spend the first three hours of each day this academic year learning in an environment uninterrupted by classroom changes or course names.

Team taught by content experts in each of the four core areas of academic instruction, the students often find themselves learning about multiple subjects simultaneously because each unit is organized around a theme.

For example, the current unit is about slopes, so students are learning to plot slopes on graphs with their math instructor; they’re reading “Peak,” a novel about climbing Mount Everest, with their English teacher; and printing 3D topographic maps of the world’s tallest mountain with Phillip Plowman, who teaches science.

Joshua Robinson, a student who praised the program, said he appreciates the curriculum’s organization.

“It’s really easy because there is only one thing that we have to focus on,” Robinson said.

Missig said the new format also has energized the teachers.

“That really gets us excited and energetic about what we’re learning,” Missig said.

Puree Kasem, who has only been learning English for a year, said that while he’s challenged by vocabulary, he appreciates the freedom the students are given.

Jaquan Green, who said he loves to study history, said the new course structure allows him to learn and ask questions about aspects of history that aren’t always included in the traditional classroom setting.

But, Green said, splitting 65 students between two large classrooms can lead to a lot of noise.

“Sometimes people can become too social and act more rowdy, but that is bound to happen,” he said.

Green is not alone in having some concerns. All four teachers applaud the instructional model, but because many of the Team 19 students have struggled academically in the past, they expressed concern about preparing the students to pass the state-mandated Standards of Learning tests.

Jay Thomas, principal of Albemarle High, said he’s told the teachers not to worry about teaching to the tests.

“If this model works, I know they’ll pass the tests,” Thomas said.

Despite the concern over testing, the teachers said they like how the model provides students with authentic, real-world experiences.

“Normally, they would just use algebra in situations, but they wouldn’t do anything with those situations,” said Sarah Lilly, Team 19’s algebra teacher. “But here, they can use the data we’re collecting to build a topographic map in their Earth science class.”

“They’re not asking us how they’re going to use the information in their lives,” Frankforth said. “They’re not as bored, and the intrinsic motivation is much higher when we’re doing this.”

What’s more, Frankforth said, is that the Team 19 students are bonding quickly.

“I’m a firm believer that everyone has to have their spot in a school,” Frankforth said. “How lucky are these kids that they already have their spot coming in as freshmen?”

Andy Ulrich, who teaches history, said teachers and students are bonding quickly, as well. Because Team 19 meets every day, Ulrich said he and his colleagues are forming relationships with the students faster than teachers who see their students only two or three times per week.

“I’ve seen them every day for the last eight days, and I’m already at the two-month mark with some of my kids in terms of the interpersonal relationship,” Ulrich said about two weeks into the school year, adding that the students also get to watch the four teachers interact professionally.

Thomas said he will monitor the pilot as the year progresses, and that while there is no guarantee that Team 19 can be replicated next year, he would like to see it happen.

“I want to see what works and what doesn’t, but it’s definitely my goal not to have these kids sitting in traditional classrooms next year,” Thomas said.

With respect to the larger shift away from traditional classroom instruction, Thomas just smiled.