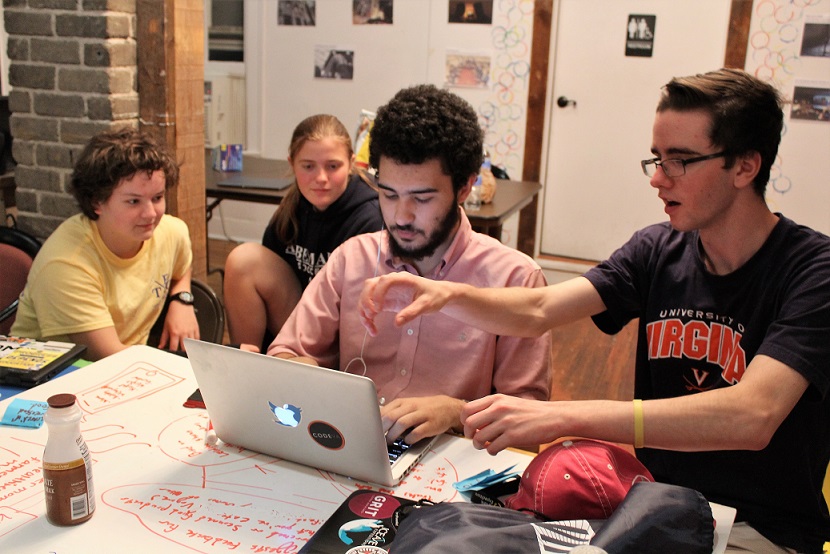 HackCville, a student-run entrepreneurship accelerator and technology skills school at the University of Virginia, hosted Wednesday’s design challenge for the AHS Computer Science Honor Society and other interested members of the public.

“It was great to see genuine excitement and passion from the students,” Ju said. “It is definitely something I would do again.”

Ju and McGinn divided the students into three groups and assigned each a broad challenge that Charlottesville and many other communities face.

After doing 10 minutes of research on their issue, the groups began a seven-minute brainstorming session, rapidly jotting down ideas on Post-It notes and on their tables with dry-erase markers.

“This is only for ideation, not evaluation,” Ju said. “Don’t factor in any constraints or costs… Assume that the consumer will act as you want them to.”

Next, the groups spent an hour winnowing down their ideas and creating a visual representation of their most promising solution. Ju and McGinn dropped in on the groups to offer guidance.

One group of students began sketching out a mobile app that would recommend local and nutritious options while grocery shopping. However, they changed course after realizing that the app would mainly appeal to “soccer moms” and other health-conscious people in the upper-middle class.

“You might want to think about the pitfalls of the idea,” McGinn suggested. “If you are opening this app regularly, you are already going to be kind of healthy.”

At the end of the challenge, the groups presented their ideas to a panel of three members of HackCville’s leadership team.

Kiernan DiMeglio said that his group’s nutrition app would let users rate the healthiness of their meals and compare scores with their friends.

“It lets you be more introspective,” he said. “It gives you a little bit of a chance to think about your food choices.”

Nikhil Bhaip, analytics manager for HackCville, said that the nutrition ratings on the app would be largely subjective and vulnerable to cheating.

Noah Healy, a Charlottesville software engineer and entrepreneur who attended the design challenge, proposed an alternative design in which users would view pictures of other users’ meals and rate their healthiness.

Another group of AHS students pitched an idea for an online, nonpartisan information aggregator to increase participation in local government and voter turnout.

Figler said that his group had difficulty finding information about local political races in Charlottesville during their research phase.

“It took us about 10 minutes to get a list of the people running for City Council this year,” he said.

Figler’s classmate, Tucker Morris, acknowledged that it would be difficult to find completely unbiased news sources in the heavily Democratic-leaning city of Charlottesville.

“We couldn’t keep it completely nonpartisan, but we would do our best,” Morris said.

The third group of AHS students pitched a feature for social networks that would help users escape the political “filter bubble” of their news feeds.

“The stories you see on Facebook today might be completely different from what your neighbor sees,” said Zak Robbins.

The new feature would expose users to articles published by think tanks with opposite political leanings. It also would let them see how their political views align with the collective average of their geographic area.

Before the students left, Ju encouraged them to continue working on their ideas over the summer.

“I will be a resource that you guys can reach out to,” he said.

“If you have an idea and you are persistent about it, there are so many people out there to help you,” McGinn said.

“There’s less pressure with a quick event,” she said.

DiMeglio said the design challenge was a valuable experience for him and other members of the Computer Science Honor Society.

“In some ways, it’s very weird; it’s something we have never done before,” DiMeglio said.

“But it’s good to think out of the box and to come up with something that could benefit the community.”