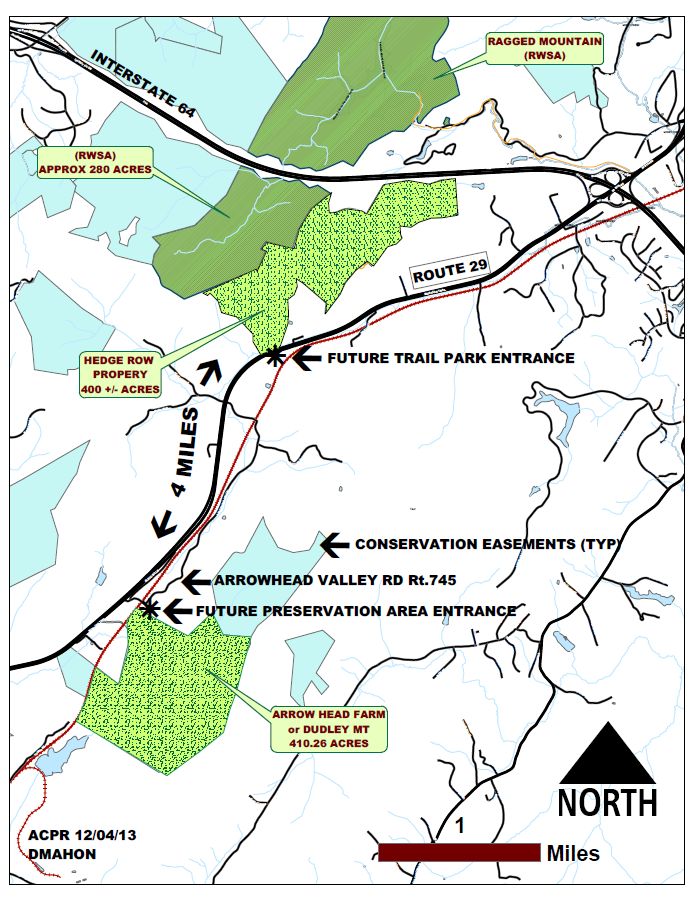 http://s3.amazonaws.com/cville/cm/mutlimedia/20131204-Arrowhead-location-map.pdf County has one month to explore partnerships to run Arrowhead FarmAlbemarle officials take tour of potential land giftLand to be donated for new park in Albemarle

An Albemarle couple’s wish to donate mountainous land south of Charlottesville to the county has been granted.

The Board of Supervisors voted unanimously this week to accept 410 acres from Montgomery Bird Woods and Jose V. Lambert for a nature preserve.

“I think it would be wise for us to move forward,” Supervisor Dennis S. Rooker said at Wednesday’s board meeting.

The acceptance comes after an initial refusal in September. Following that decision, Lambert and Woods arranged a tour of the property in late October.

In November, Lambert told the board he was frustrated by its delay in accepting the gift, but said he now is glad of the outcome.

“We are very pleased that the county has reconsidered and decided to accept this property and are very happy that it will be in the hands of a governmental agency to protect it in perpetuity,” Lambert said in an interview.

Staff had been reluctant to accept the donation of Arrowhead Farm because they said it would take several years before the county would have the necessary funding to invest in the park and to prevent trespassing.

In November, the board directed staff to follow up on the possibility of finding nonprofit partners to serve as caretakers for the land.

“Rockfish Wildlife Sanctuary and the Ivy Creek Foundation emerged as the most interested, best-suited and capable of the kind of commitment needed as reliable partners,” said Bob Crickenberger, director of the county’s parks and recreation department.

Crickenberger said he is confident that terms of the partnerships will be finalized before the county completes acquisition of the land. Responsibilities will include monitoring the property, assessing trail conditions and reporting unauthorized uses.

However, Crickenberger stressed the groups can only offer labor and cannot contribute financially. With the partnerships, Crickenberger said the operating cost for the preserve in the near-term will be $6,500 a year.

“Ultimately, responsibility, management and maintenance of the facility is going to rest on county staff, but with a lot of volunteer assistance,” Crickenberger said. He added that many other groups have expressed interest in joining the partnership.

“There are lots of opportunities for other organizations to come forward at a later date,” said Supervisor Duane E. Snow.

“There are some really interesting models in the country where nonprofits come together to support localities doing this,” Dittmar said, specifically mentioning Scenic Hudson by name.

Supervisor Kenneth C. Boyd said he remains concerned that people would use the land inappropriately knowing it is publicly owned property.

However, Supervisor Ann H. Mallek said she thought the volunteers would serve as stewards.

“When there are people there watching, the people who would trash it won’t come,” Mallek said.

A representative of the Rockfish Wildlife Sanctuary said his group is eager to get to work.

“We’ve been looking for an expanded home for our [education] program for years,” said Jim Peterson, the group’s treasurer. He said offering outreach activities on their 20 acres in Nelson County is not compatible with the mission to release rehabilitated animals back into the wild.

Supervisor Rodney S. Thomas said he was prepared to vote against it, but was persuaded to change his mind because of Peterson’s enthusiasm.

One of the conditions of the donation is that the park be named after Woods’ father, attorney William Sharpless Derrick Woods, formerly of the law firm of McGuire, Woods, & Battle of Richmond.

Acquisition of the park also will not stop programming of another nearby park proposal south of the Ragged Mountain Natural Area that will be acquired through a gift from the Nature Conservancy.

“[William Woods Park] serves a much different public purpose than the proposed Hedgerow Trail Park,” Crickenberger said. “Hedgerow is expected to be developed as more of an active, multi-use recreational park such as Byrom and Preddy Creek.”

Crickenberger said he would return to the board for a final decision on acquiring Hedgerow Trail Park in early 2014.