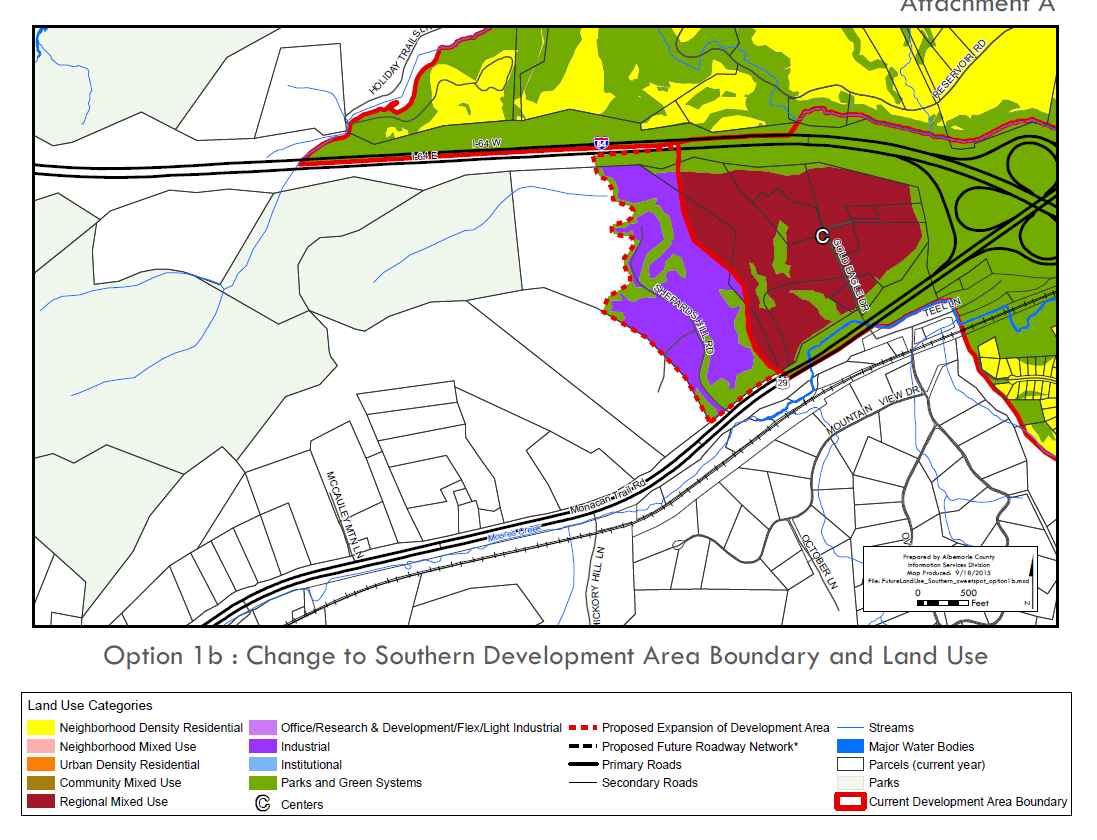 The Albemarle Board of Supervisors unanimously voted Wednesday to adjust the county’s growth area boundary to include just over 51 acres of new land.

That is well short of the acreage preferred by the landowner, according to the county’s economic development director.

“While I am grateful that we have added a little bit of land, I would be remiss if I didn’t honestly tell you that we will have some challenges in even developing [the parcels] that have been added today,” said Faith McClintic.

In May, the board directed staff to study adding up to 233 acres of land into the development area because a potential business said they might want to locate there.

The identity of the business has been kept confidential because Virginia law allows that information to be withheld to allow companies to negotiate privately.

The prospect has been identified as a brewery. Charlottesville Tomorrow confirmed in August that Deschutes Brewery of Bend, Oregon is looking at Albemarle as one of several potential sites for an East Coast facility. However, the company declined to confirm they were looking at this specific location.

The Planning Commission unanimously recommended against the adjustment in August.

The Board of Supervisors delayed a vote after a Sept. 9 public hearing in order to consider potential language in the comprehensive plan amendment to protect the environment and to possibly consider a smaller area than that requested by the landowner.

The landowner is Sweetspot of Albemarle.

“We have had regular conversation with the landowners,” McClintic said, noting that they are represented by attorney Valerie Long of the firm Williams Mullen.

In all, supervisors were shown five different options for the growth area expansion, but they only discussed two at Wednesday’s meeting.

Option 1-B, which was eventually approved, designates a total of 35.28 acres for industrial use and 16 acres as “parks and green systems.” The rest of the property would remain in the county’s rural area.

Option Q would have added 83 acres of industrial and 45 acres for green space.

“What the larger area does is provide for more development opportunity,” said Wayne Cilimberg, the county’s planning director.

Supervisor Liz Palmer suggested several revisions to the text of the Comprehensive Plan amendment to insist upon greater protection of Moores Creek and to require that new development to wait until Interstate 64’s exit 118 is reconstructed.

Supervisor Ken Boyd objected to all of these conditions as hurdles for a future developer to come.

“What bothers me about tweaking this language is that it is leaving it open for any type of interpretation that staff could come up with, and that concerns me,” Boyd said. “What we’re really talking about doing is getting out of the way so that we can put a willing buyer and seller together and possibly create something good for the community.”

Some of the language changes had the support of Supervisor Ann Mallek.

“I am not interested in throwing all of our environmental regulations out in order to do this,” Mallek said. “I want to have the jobs as well as high water quality.”

Language about higher water quality protection did not make the cut because a consensus of supervisors agreed the county’s existing water protection ordinance is sufficient.

Palmer, who has been the board member most critical of the adjustment area, made the motion to go with option 1-B.  She read from a statement prepared by county attorneys to explain her position.

“At the completion of this project process, the board concludes that it is appropriate to expand the development areas to include only those lands already zoned [residential] and within the jurisdictional area for public water and sewer services, but to exclude those portions of those lands that are environmentally sensitive and in critical slopes that are not integrated with the buildable portions of the land,” Palmer said.

Boyd would go on to support the motion, but said that was not his first choice.

“I think what that does is to provide the least amount of developable space there for us and that scares the heck out of me,” Boyd said. “If we are going to attract a business to locate in that particular location then we need to give them the most flexibility that we can.”

In response, Palmer said she wanted to make a second motion to direct McClintic to quickly complete an assessment of the available amount of light industrial land “so that we’re not doing piecemeal changes.”

Sheffield said he would support adding more area, but was concerned about the precedent that would be set by adding land to the development area that is not within the jurisdictional area of the water and sewer authority.

“My major discomfort and my uneasy feeling about all of this is that we we’re so unprepared for this opportunity,” Sheffield said.

McClintic said the study would likely not yield a property that was as desirable to this particular prospect.

“We have nothing of this nature that [is close to] the interchange,” McClintic said.

Sheffield spoke at the same time as McClintic.

“I would support that in more of a formal presentation to the board,” Sheffield said. He added that there may be land in the growth area zoned residential that could be converted to light industrial, specifically mentioning land that will be opened up by the extension of Berkmar Drive.

“We’ve already had people approach us about that,” McClintic said.

Supervisor Diantha McKeel said she was also concerned about bringing the larger piece of land into the growth area.

“We really have to move forward to figure out where we are with land,” McKeel said. “I’m a little concerned, very concerned, that we not piecemeal it and just do it very quickly without looking at the county as a whole.”

Mallek said she thought McClintic’s work should be to prioritize light industrial opportunities in the growth area, and not the rural area. However, she supported the smaller adjustment.

“This is a baby step and I recognize that,” Mallek said. “But I think it’s the baby step that I think our community is much more supportive of then something that is much larger.”

Boyd voted in favor of the motion because it would “send the right message to the company” but said he opposed limiting the available amount of buildable land.

After the vote, McClintic said she did not believe the supervisors added enough land to the growth area.

With regards to this proposal, McClintic said she would need to reach out to the owners of property of property to the east that is within the development area and currently zoned as highway commercial.

“I’m certainly willing and more than happy to begin that dialogue with those property owners,” she said.

Supervisors passed a second motion directing McClintic to complete a review of industrial land opportunities already in the growth area.

“I move the board resolve to not consider any further piecemeal expansions of the development areas and to support only those expansions of the development areas after a comprehensive study of the county’s supply, need and location of industrially designated lands, and request the staff and Planning Commission initiate the work plan that’s identified in the 2015 Comprehensive Plan,” Sheffield said.

The motion passed 5-0 with Boyd abstaining.