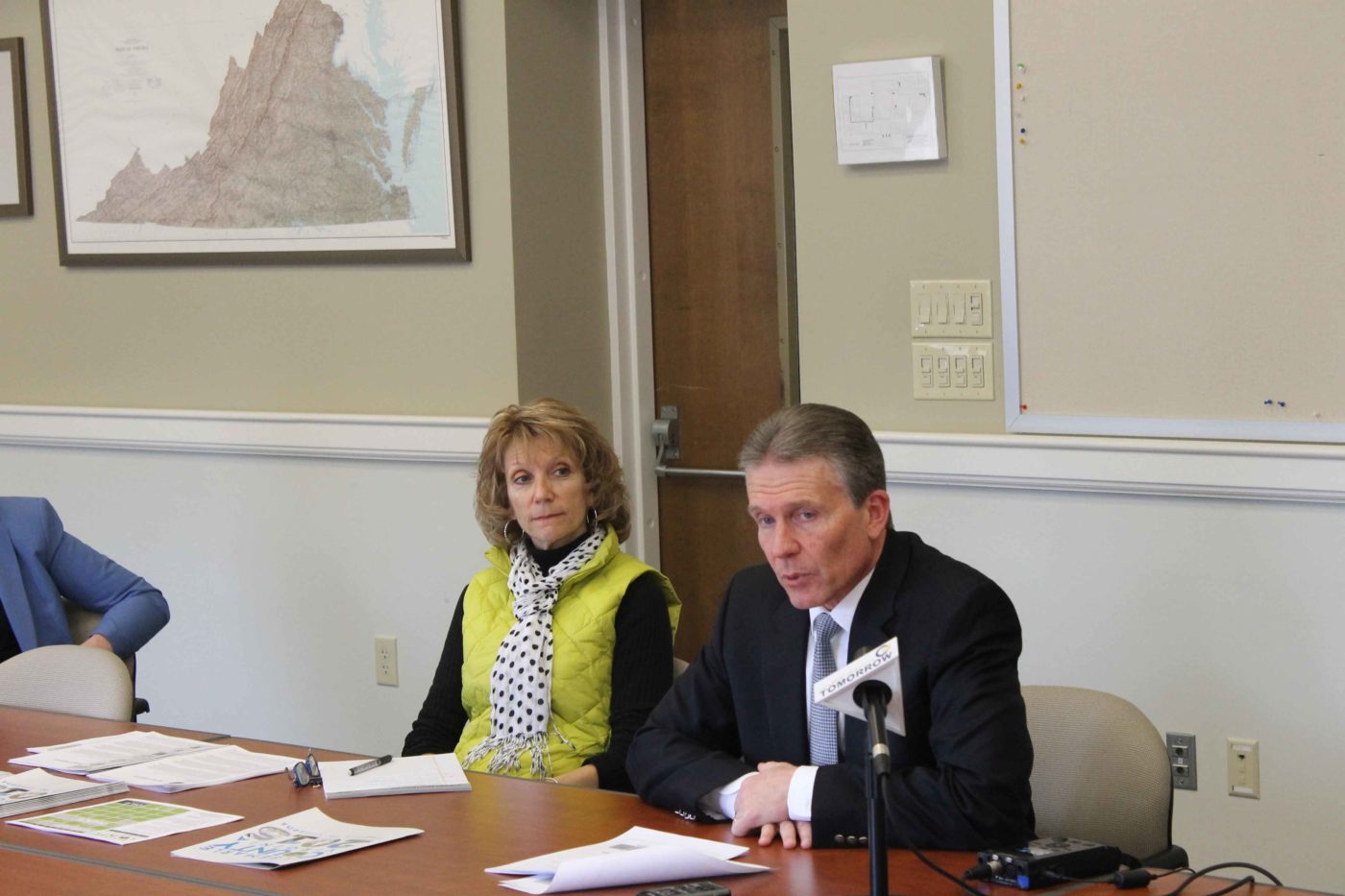 “The reality is, slow revenue growth in the face of consistently growing mandates and obligations and just keeping up with services has put us with a huge gap that we have to solve,” Thomas Foley told reporters at a briefing Thursday.

If adopted by the Board of Supervisors, the tax rate would be 84.4 cents per $100 of assessed value. The total operating and capital budget would total $375,226,727, a slight increase over the current year. The tax rate change would be retroactive to the beginning of the calendar year.

“There are increasing caseloads for social services as population grows over time,” Foley said. “There are more calls for service for police and fire as a result of that. The school system is a very clear and easy one to track with enrollment growth.”

Budget staff had expected a 2.25 percent increase in assessments but overall assessments came in at 1.84 percent. Foley’s budget also anticipates a slowdown in the economy.

“Those things have made us be very cautious about putting this budget together,” Foley said. “Coupled with that are some of the most significant increases in mandates and obligations that we’ve had.”

The tax increase will generate an additional $9 million in revenue. Foley said $7.6 million of that will go toward complying with mandates.

Foley said one of those mandates is a $1.7 million increase to comply with the Children’s Services Act. Debt service to pay off capital projects has increased by $2.9 million.

In this year’s budget, employees would get a 2 percent raise. However, they’ll have to contribute more toward their health care.

For the past several budget cycles, Albemarle has used a five-year financial forecast to demonstrate long-term fiscal trends. The tool has continued to show a widening gap between expenditures and revenue.

Foley said this year’s budget will be reviewed with a close eye toward the next fiscal year in order to reduce the gap.

“We’ve decided to look beyond just FY2017 so that we don’t just go year to year looking at budget gaps and having to propose tax increases or major cuts in expenditures,” he said.

“The reality is that [more] tax increases are going to be needed in FY18 unless we do something different,” Foley said.

Foley said county staff will also have to identify $400,000 in savings over the next two years in order for the budget to stay balanced.

That trend has already begun. Earlier this year, the county consolidated its general services and facilities management departments into one unit to reduce overheard.

“We’re going to look into more of that both with the school and the local government,” Foley said.

There are no new positions included in the social services and police departments.

However, that will mean the county will continue to fall behind in its goal to have 1.5 police officers per 1,000 residents, despite having hired 17 officers in the past four years.

“Without adding officers and population going up that number is going to drop below 1.3,” Foley said

However, the budget does have some new investments. For instance, Foley is proposing $250,000 for a new urbanization and economic development fund to incentivize place-making initiatives. Up to $250,000 would go toward as a match for the Virginia Department of Transportation’s revenue sharing program.

Another $50,000 would go to help pay for a new bus route to serve 5th Street Station, home of the new Wegmans grocery store, though Foley said the details have to be worked out.

“We felt an obligation because there was a proffer provided through that development to at least have some money in this budget to look at,” Foley said. “There’s $50,000 set aside to determine between the Board of Supervisors and the City Council what we’re going to do.”

Another $125,000 would go toward an efficiency study which Foley said could be a precursor to working with the City of Charlottesville to find out where the two jurisdictions can share costs.

“Maybe we’re not talking about merging police departments,” Foley said. “Maybe we’re talking about how we merge some administrative operations that save us money but we should be looking at everything and getting it on the table.”

Two big capital projects are a fire station for Pantops and a renovation of the courts complex in downtown Charlottesville. Other than that, Foley says the capital improvement project is maintenance only.

“That’s something that we’ve been talking about for three years,” Foley said.

One potential source of additional revenue could be levied through a stormwater utility fee. A committee examined the issue last year and the Board of Supervisors will hold a work session in the spring.

“That’s one of those items that I think they’re going to have to look at maybe with a different lens now given the challenges going forward,” Foley said. “There is 0.7 cents on our tax rate that’s dedicated to stormwater now.”

This year all of the budget sessions will be conducted in Lane Auditorium so that citizens can watch on the live video stream or view the archives.

“They’ll still have the opportunity to go back and see everything that’s been done,” said assistant county executive Lee Catlin.

The public hearing on Foley’s recommended budget will be held Tuesday at 5 p.m.