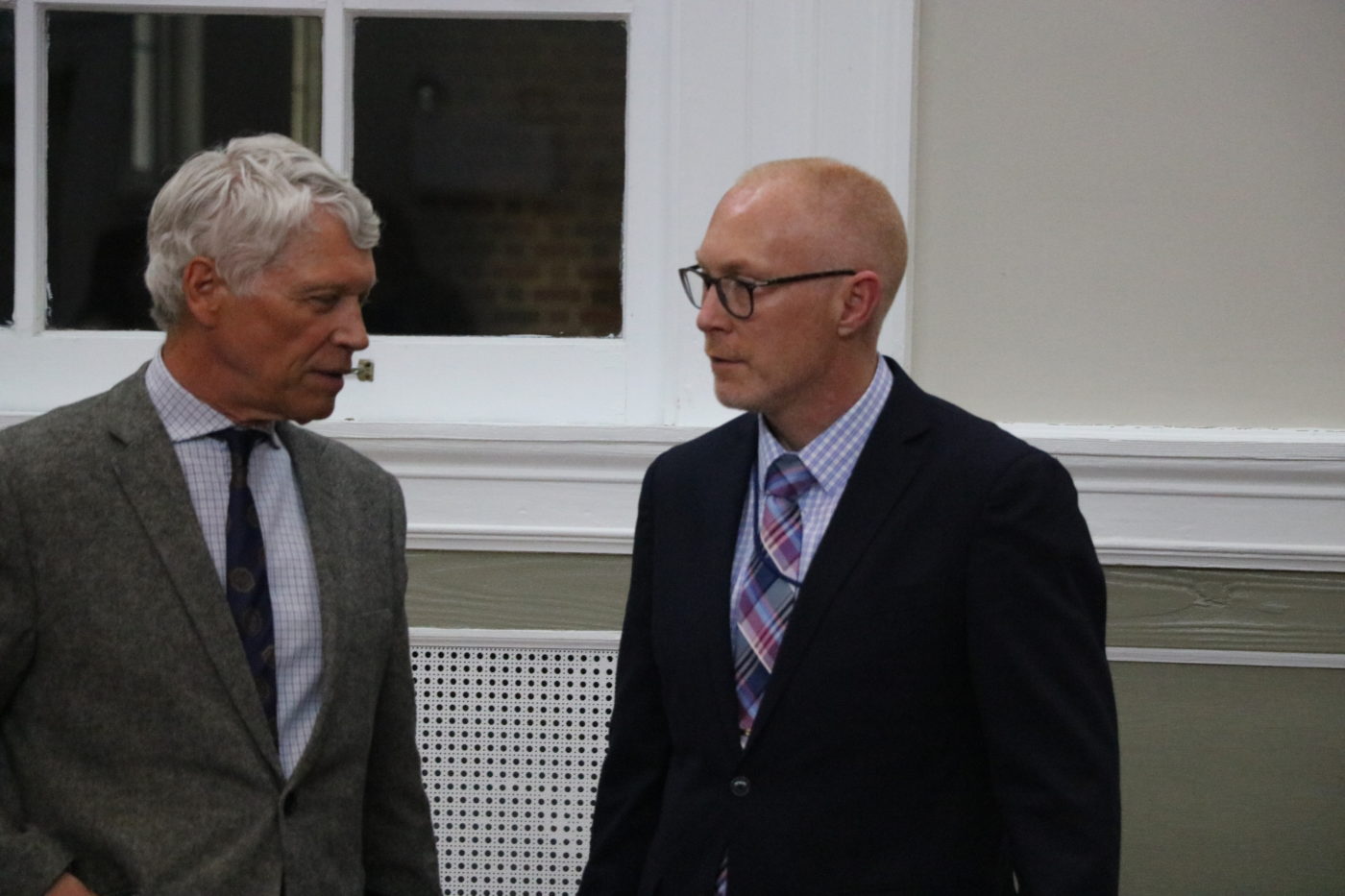 Phil Giaramita, spokesman for the county schools, spoke with Matt Haas (right), superintendent of Albemarle County Public Schools, after a school board meeting in February.

While instruction will be moving online for Albemarle County children, the School Board on Thursday voted 6-1 to allow students to play winter sports and take part in extracurricular activities, including band.

ACPS will move entirely virtual on Tuesday, and that situation will continue until at least Feb. 1 due to the rise of COVID-19 cases in the area.

The move comes at a time when neighboring school divisions, like Louisa County Public Schools, are also virtual due to uncertainty around COVID-19.

At Thursday’s meeting, in which at least 35 people were scheduled to comment, several parents lauded the division for their decision.

“If we shut kids out of schools and extracurricular activities, many of our kids will continue to participate with their club team, however, as said earlier, it is an equity issue,” said Dan Bledsoe, a coach and parent.

“ [For] our poor students, the expense of a club team is not a possibility. The benefit of participating in a school-based sports program goes beyond the playing field, the court or the pool. It plays an integral role in the academic success of many of our students.”

While parent Matt Wrinkler supports the ACPS’ decision to allow children to play sports, he also urged School Board members to allow in-person instruction because many families are struggling with virtual learning.

“I strongly encourage you to reopen our schools for those who want to go back,” Wrinkler said.

Most of the worries of ACPS stakeholders also include the constant moving to and from in-person learning, they said.

Educators also wondered why the county schools won’t settle on a definite date to evaluate when to bring children back to school like Charlottesville City Schools, which has a tentative reopening set for March 8 as well as a date to when educators would get their vaccines.

Jessica Maslaney, a county parent and CEO of the Piedmont Family YMCA, said constant changes do not give people like her time to plan accordingly.

She said her daughter has not been able to settle in a definite schedule given the number of times the county schools have had to switch plans.

“As a community partner, we run early and virtual centers. On average, we serve 300 students each day across three sites, and have done so since June. Today, we’ve had zero student confirmed cases and only two teacher cases, both resulting in outside exposures,” Maslaney said.

“And through our existing safety protocols, [they] did not transmit to staff or students. Our challenge is that frequent movement between stages makes it very difficult for our staff to plan between synchronous and asynchronous learning and for us to maintain isolated pods of 10 children to limit cross contact. It is also disruptive to students and staff. It’s affecting our staffing. …  We ask you to reconsider the week-to-week decision making and identify stages by dates.”

While many raised concerns about the constant changes, School Board members didn’t discuss plans to serve children with special needs or English-language learners.

This is not the first time this has happened. While the divisions have made effort to serve these categories of children, those families have oftentimes been left out of the conversations.

Phil Giaramita, a spokesman for ACPS, on Friday told Charlottesville Tomorrow that the transition to online learning is only for the next two weeks.

“The school division will reassess the health data and make an announcement on Jan. 27 on whether we will continue to Stage 1 (all virtual) or change to a different stage,” Giaramita said.

He added that the ACPS have already been supporting families who have internet issues, English Language Learners special needs children.

“Next week will not be the first time we are in an all-virtual mode.  As an example, principals and teachers are reaching out to these families on a regular basis, even visiting their homes to ensure they are receiving the support they need,” he said.

Judy Le was the lone School Board member who voted to oppose allowing children to play sports while moving instruction online.

“I very much appreciate the mental health component of this. I feel like decoupling it from stage three might make sense, but for me it’s hard to get my head around saying that our buildings are not safe for students who have insufficient internet access or who have special needs or English-language learners or who we have identified as disengaged,” Le said.

At Louisa County Public Schools, which transitioned online until Jan. 29 due to a great number of teachers being in quarantine and the district not being to fully staff, special needs children won’t receive in-person services.

Services for special needs children, including those needing one-on-one therapy will only be assisted via Zoom, said Carla Alpern, assistant superintendent for pupil personnel services for the district.

But internet connectivity has been a big priority.

Superintendent Doug Straley said much of the work that students would be doing they’ve already downloaded on their Chromebooks, so they can work offline. But the school district has done its best to overcome internet issues in rural communities.

“In rural communities, there are a lot of families who need access to high speed internet, and I’m really proud of our team because we’ve been able to come up with some unique ways to help our families access the high speed internet,” he said, citing the installation of more than two dozen solar hotspots that the district placed on trailers where people can drive up to them and have access to the internet for free.

One-third of the district’s student population have been online-only all year and have been using these units. So, it seems like it’s been working for them, he said.

“We’ve had a pretty amazing response from our community about these units,” he said. “We’ve also extended the Wi-Fi signal of schools. We just put some signs in our parking lot to direct people where the Wi-Fi can be accessed.”