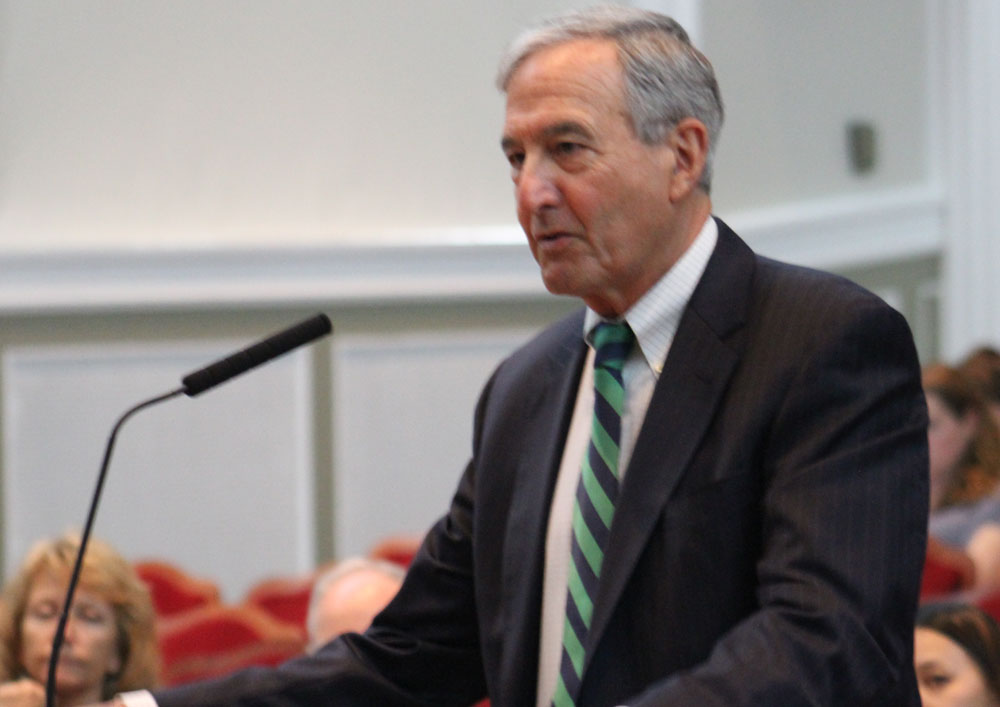 As Albemarle ponders whether to move its judicial and administrative functions outside of Charlottesville’s borders, the county has hired a real estate and development firm to advise the Board of Supervisors on how a deal could be struck with the private sector.

“Our goal here is to provide you with the information you need to make a decision,” said Jeffrey Simon, a senior principal with Stantec.

In 2014, a majority of the current Board of Supervisors overturned a previous decision to work with Charlottesville on a plan to co-locate the two localities’ general district court at the Levy Opera House. Instead, members asked for options on how the courts could instead be moved into Albemarle’s urban ring.

Two months prior, former County Executive Tom Foley laid out five alternatives for how to proceed, including renovating the existing courts. Many involved entering into public-private partnerships that would save the county money on its investment.

Last December, supervisors voted to hire a consultant to serve as a “development adviser” to help the county with the complicated real estate decisions that would be necessary for the relocation idea to proceed.

Stantec will be paid a yet-to-be-determined amount of money. The entire scope of the work has not yet been finalized.

“They were brought on specifically, initially, to focus on our consideration of a public-private partnership opportunity related to Option 5,” said Doug Walker, the interim county executive. That alternative would assume construction of an 85,000-square-foot building to accommodate the general district and circuit courts, as well as creation of 250 public parking spaces and 100 for judicial employees.

For the purposes of Stantec’s work, the area around the intersection of Rio Road and U.S. 29 will be studied. The Board of Supervisors will next see a small-area plan being developed for that location in October.

Supervisors were shown several examples of public-private partnerships, including 419 Town Center in Roanoke. That project is a plan to redevelop 390 acres in Roanoke County, including the aging Tanglewood Mall.

“In some ways, it’s very similar to Rio Road and U.S. 29,” said Drew Leff, principal-in-charge at Stantec. “There’s a large shopping center and land around it, and [the goal is] turning it into a dense, walkable community.”

Stantec also worked on the master plan for the redevelopment at Friendship Court for the Piedmont Housing Alliance.

The presentation was a primer on the many different forms a public-private partnership can take.

“‘P3’ is a word that’s tossed around quite a bit, and it means different things to different people,” said Matthew Hunt of Stantec. “At its largest level, a P3 is simply a transaction structure having both a public-sector partner and a private-sector partner involved in it.”

Hunt said how the transaction structure is formed depends on what the public entity wants to accomplish and whether the private entity can make a profit.

On one end, the county could take on the role of being the master developer, but that would involve large capital expenses and higher risks. They could lower the capital burden and lower risk by entering into a joint venture with a developer. Or, they could buy land and enter into a long-term ground lease with private developers.

“On a ground lease, you can receive an income stream, but it has to be sufficient enough for the county’s needs, but it also has to be market-based enough so development could occur on top of it and still allow someone to release a return or a profit,” Hunt said.

A local example of a public-private partnership is the one entered into in the early 1990s to build the Water Street Parking Garage. The city and the Charlottesville Parking Center created a 99-year ground lease for the facility, an arrangement that worked until August 2014 when a sole shareholder bought the privately held CPC. The two sides are now suing each other over various disputes, including what rates should be charged to park in the garage.

“It’s very important that there are clear and negotiated agreements,” Hunt said. “There needs to be clear decision-making authority, clear decisions on who gets to decide what has to be decided jointly and what are the conditions for resolving [disputes]. It’s a marriage, and it needs to be thought through carefully.”

Other possible partnerships could govern what happens to county assets such as the former Lane High School that has served as the main office building since 1978.

“Developers or the private party could design, build and often operate the public facility or infrastructure, and in turn they’re getting a projected income stream,” Leff said. That means that under this arrangement, the county could pay rent to the developer.”

Stantec has no preconceived ideas for how such a partnership would be structured locally. They must first do the research.

“We’re at the beginning of the beginning,” said Xuan Phan, a project director with Stantec. “The current phase that we’re in is really an assessment phase.”

Phan’s team will spend the next two months studying market trends and area demographics. Analysis of potential economic impacts and what the county’s buildings are worth will be conducted through early fall.

At the same time, the firm Moseley Architects will be conducting a “programming analysis” that will update their previous work to study Albemarle’s court needs.

Moseley Architects also conducted a master plan and design for the new courthouse at James City County. That mixed-use project has been held up by county officials as a reason to pursue a public-private partnership.

Walker said there is another study being conducted by Stantec to inform the decision of keeping the courts in their historic location downtown.

“This is the engagement to understand how the city courts and county courts relate to each other in their current configuration, as well as all the other affiliated court-related agencies,” Walker said. “It’s so we can have better-than-anecdotal information about the impact of those relationships in the event there’s a consideration of moving the county courts away from their current location.”