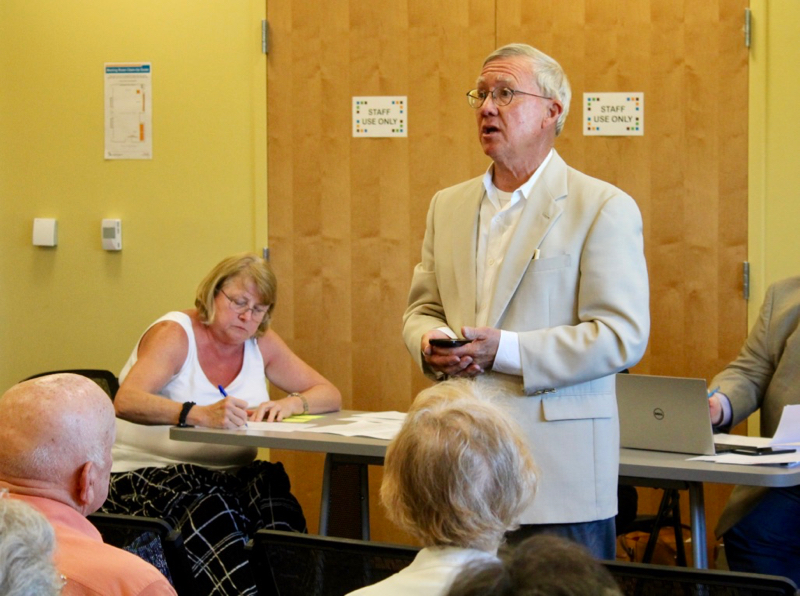 The Albemarle County Republican Committee nominated John Lowry as their candidate for the Samuel Miller district seat on the Board of Supervisors.

At a mass meeting on Tuesday evening, the Albemarle County Republican Committee nominated their only candidate for one of three upcoming Board of Supervisors elections.

Retired businessman John Lowry ran uncontested for the party’s nomination in the race for the Samuel Miller District seat. Lowry previously announced his candidacy in February.

“We should have better use of our land … we should have a better approach to our finances,” Lowry said in a speech at the mass meeting. “We need a … real economic development program.”

“I’m really excited about John Lowry,” Albemarle County Republican Committee Chairman George Urban said. “He brings a unique depth of experience with the positions he’s held in our community over the past three decades, and I think he’ll be a terrific candidate.”

Lowry has previously chaired the Albemarle County Economic Development Authority and ran for the same seat on the Board of Supervisors in 2009 as an independent.

The Republicans did not nominate candidates for the Jack Jouett or Rio district seats.

“We had some great prospects — unfortunately for us and for the voters, family and business responsibilities took precedent,” Urban said. “Running for office is an enormous commitment and responsibility, so other than John Lowry, none of the others ultimately decided to step forward this time.”

Rio District Supervisor Brad Sheffield announced in February that he would not be seeking re-election.

McKeel was elected to the Board of Supervisors in 2013 and currently serves as the board’s chairwoman.

Gallaway is a former chairman of the Albemarle County School Board and was elected to the at-large seat on the School Board in 2011.

In 2015, he did not seek re-election to the School Board and decided to run for the Virginia Senate. However, his bid was unsuccessful and he lost to Sen. Bryce Reeves, R-Spotsylvania, in the race to represent the 17th Senate District.

The Albemarle County Democratic Committee officially nominated Gallaway, McKeel and Palmer as their candidates at a caucus held Monday. All three ran uncontested.

“[I] pretty much expected them to be uncontested,” said Patty Haling, chairwoman of the Albemarle County Democratic Committee. “Diantha and Liz are both incumbents, we were hoping that they would both run again, and Ned Gallaway, he’s an excellent candidate [who has] experience with campaigning, and we were delighted when he stepped up.”

Albemarle County General Registrar Jake Washburne said Tuesday afternoon that no independent candidates have filed to run in any of the Board of Supervisors races.

Anyone seeking to run as an independent must file the necessary paperwork and 125 petition signatures by June 13.

Kessler, however, said he was temporarily withdrawing his application and cited “heated emotions” surrounding recent events in Lee Park as a reason for deferring.

White nationalists held a torch-lit rally in Lee Park on Saturday night in support of the Lee statue, drawing condemnation from community and state leaders. In a short address to the committee, Kessler said he did not organize the event and that he was covering the event as a journalist.

A counter-protest was held Sunday night to denounce white supremacy, and three people were arrested, including Kessler for disorderly conduct. He disputed the police department’s version of events and claimed he was a “political prisoner.”