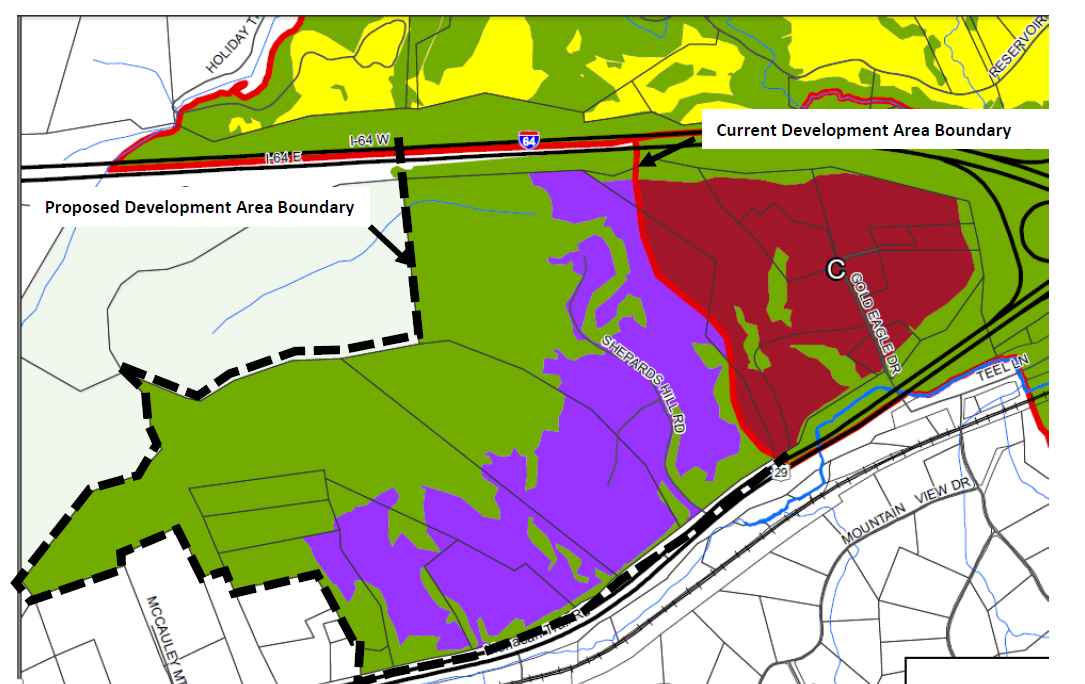 One reason an unnamed West Coast brewery is looking at an Albemarle location to expand its operations is the prospective site’s proximity to both Interstate 64 and U.S. 29.

“The primary reason would be to get beer to markets faster and fresher,” said Chris Furnari, who covers the beer industry as editor for BrewBound.com.

However, a preliminary report from the Virginia Department of Transportation has concluded the project could generate more than 5,000 daily trips, adding to an already busy highway.

“Based on the information provided, the development of the properties in the proposed expansion area will significantly increase the traffic on the surrounding roadway network,” wrote VDOT engineer Chuck Proctor in an Aug. 13 letter to county planner Elaine Echols.

VDOT studied the area in advance of Tuesday’s Planning Commission public hearing on whether the county should adjust the growth area to include 223 acres southwest of the intersection of U.S. 29 and I-64. About 85 acres of the land are considered developable, and the rest is being recommended to be preserved.

If the Board of Supervisors votes to adjust the boundary, the land would still need to be rezoned for light-industrial uses to accommodate the brewery.

Growth area adjustments have been very rare in Albemarle since the county adopted its 1980 Comprehensive Plan. The fast-tracked process for this prospect has alarmed some who question why the county itself is making the request and not the landowner.

“I don’t believe the board would have initiated this process if they didn’t feel this particular company was of real value and aligned with things that are meaningful to the community,” said Faith McClintic, the county’s economic development director.

“[The company] knows how difficult this [process] is for you and them,” she said at an Aug. 12 “listening session” between concerned neighbors and county officials.

The land, owned by a holding company called Sweetspot of Albemarle, is between the Virginia Eagle Distribution Company and the future Hedgerow County Park. The Board of Supervisors accepted 340 acres from the Nature Conservancy earlier this year but the county has no current plan or funding to open the land to the public.

Albemarle officials have confirmed that an “adult beverage producer” is interested in the Sweetspot location.

The county has withheld the company’s identity at its request, a standard practice when companies are seeking to expand their operations in a community where they have previously not done business.

Furnari said he does not know which company is looking at the Albemarle site, but that West Coast breweries expanding operations to the East Coast is a growing trend.

“You look at a company that isn’t quite national yet with their distribution but it is maybe getting to that point,” Furnari said. “Their decision process is that they know they want to have their products available and they know they’ll likely need additional capacity to produce these products.”

“To them, [Asheville] was very similar to Chico and they thought it was a place where they could maintain the identity,” Furnari said. “At the end of the day, I have to imagine that the financial considerations outweigh the cultural considerations.”

Closer to home, Richmond lured California-based Stone Brewery to a James River location with $31 million in general obligation bonds. While the company will have to eventually pay that money back, it will not have to pay back another $7 million in state and local grants based on the creation of as many as 288 jobs.

Stone is investing at least $41 million of its own funds in the project.

In contrast, some members of the county Planning Commission have been briefed that the unidentified company will provide as many as 100 new jobs in Albemarle.

While McClintic said the county is committed to maintaining the firm’s anonymity at this time, she did offer several facts about the company. For instance, its current facility is landlocked and the company wants to build in further room for capacity. It also likes the fact that new parkland is right next door.

“In their minds, that was such a good fit for their environmental philosophies,” McClintic said.

McClintic acknowledged at the briefing last week that both state and local incentive packages are being put together, but they are also being kept confidential until a deal is signed.

One local incentive could be the waiver of water and sewer connection fees that would be paid to the Albemarle County Service Authority. The agency has a policy that new development pays steep fees to connect to the public system.

“A company like a brewery would need a very big [water] meter, which would mean it would be a lot more money than hooking up a house,” said Supervisor Liz Palmer, who added that she was not aware county staff had prepared a local incentive package.

Local developer Wendell Wood said that while the prospect seems like a good company, the county should require everyone to play by the same rules.

“I don’t think that burden should be put on taxpayers,” Wood said, adding that he has spent millions to bring water and sewer to his developments.

But perhaps the biggest factor will be how the industrial development affects the highways.

The existing entrance to both the Sherwood Farms neighborhood and the Virginia Eagle Distribution Company is at an unsignalized intersection a third of a mile south of the interchange.

Proctor reminded Echols that VDOT considers U.S. 29 a “corridor of statewide significance” and that traffic signals are “the last option” to consider when a plan to access the site is developed.

However, Proctor said the traffic study was not as complete as will be required if supervisors approve the adjustment and move forward with the rezoning.

Another looming project is the reconstruction of the I-64 interchange with U.S. 29. The project has a preliminary price tag of $170 million but no source of funding has been identified.

Deschutes Brewery
Michael LaLonde, president and CEO of Deschutes Brewery, has confirmed that Albemarle is one of several sites on the east coast that his brewery is investigating.
“I wish we could open up twenty new breweries but we can’t,” LaLonde said.
Deschutes Brewery is from of Bend, Oregon and began in 1988 as a brewpub. The company now ships its beverages to 28 states, not including Virginia and much of the northeast. Deschutes is named after a river that passes through Bend.
The company is currently ranked as the seventh largest craft brewery in the nation according to Brewers Association. The association also lists it as the 12th largest brewery overall.
Other contenders according to news reports include: Asheville, North Carolina; Charleston, South Carolina; and Greenville, South Carolina
The Asheville Citizen-Times reported that the company is seeking to build a facility that would begin by producing 200,000 barrels a year but have the capacity to expand to 600,000 barrels.
Asheville has attracted many breweries over the years.
“The smaller breweries just keep coming down here,” said Tony Kiss, who covers the beer industry for the Citizen-Times. “And the big ones pay some pretty good money to employees.”
LaLonde said Albemarle County and Charlottesville seem to be a good town, but that the company has not made a decision. In all, he says he has visited around 40 communities, narrowed down from around a hundred potential sites.
The Charleston Post and Courier reported in May that the company hopes to make a final decision by the end of the year and to begin operations by the spring of 2019.

LaLonde agreed with that reported timeline but declined to verify the property in Albemarle was the specific site being eyed by his brewery.

This story updated at August 18, 2015 to reflect input from Deschutes Brewery.