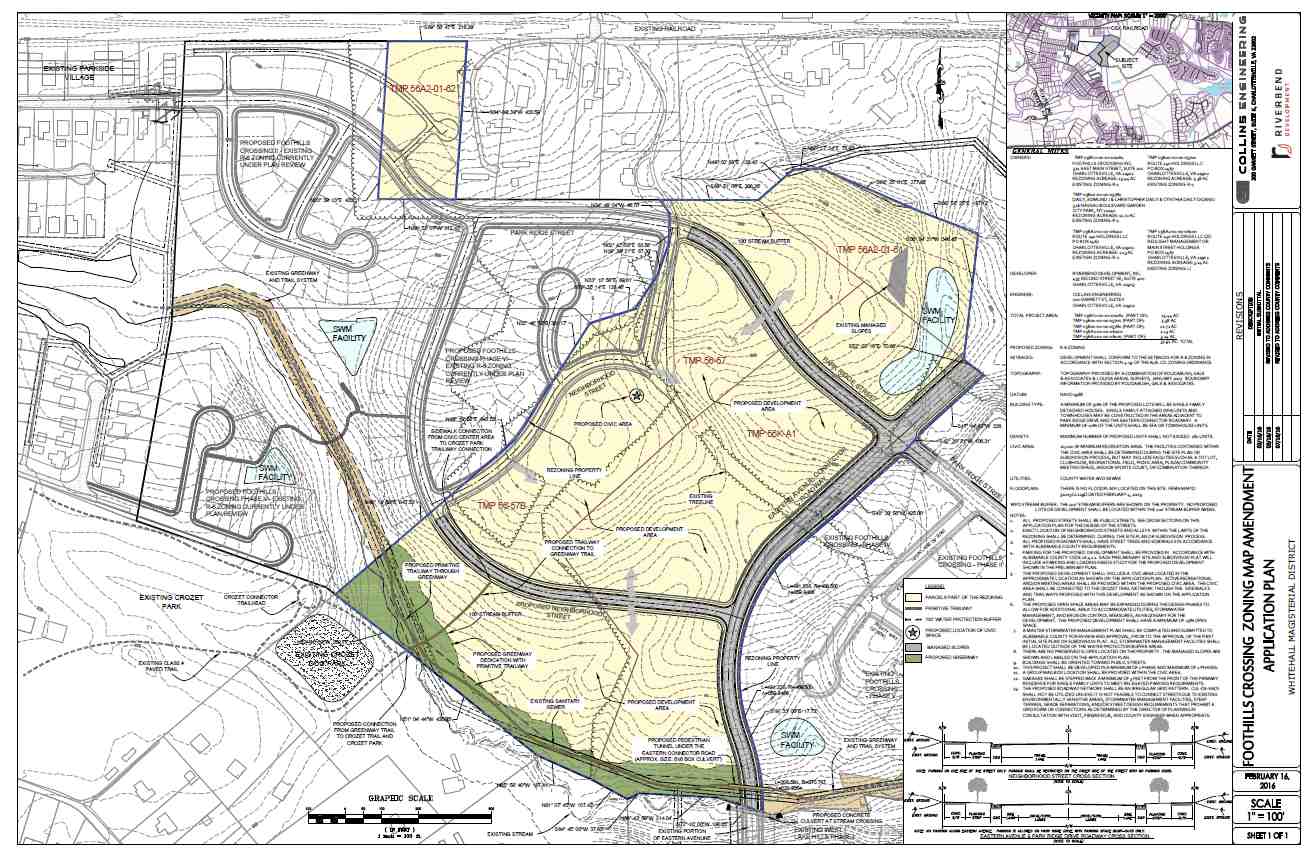 The Albemarle County Planning Commission has recommended adoption of a proposal to rezone land within the boundaries of the Crozet Master Plan. The development also would add to the area’s transportation network.

“This is somewhat of a jigsaw puzzle with the overlapping and interplay of the property boundaries, the zoning map and the Comprehensive Plan,” said Valerie Long, an attorney with Williams Mullen representing Riverbend Development.

Riverbend has asked the county to rezone about 38 acres of land east of Crozet Park to six units per acre for a maximum of 180 units. The majority of the parcels in this section of Foothills Crossing are currently zoned for one unit per acre.

As part of the plan, Riverbend will construct a section of Eastern Avenue, a proposed north-south connection between U.S. 250 and Route 240.

“The portion they are constructing will connect Park Ridge Drive to a portion of Eastern Avenue that is already under construction in the Westlake Hills subdivision,” said county planner Rachel Falkenstein. “It is anticipated the portions south of Westlake Hills will be constructed by developers when they eventually develop.”

That will require a bridge across Lickinghole Creek that Albemarle County is expected to pay for. However, Falkenstein said that project has no funding in the capital improvement program.

A connection to the north across the CSX railroad tracks also will eventually have to be made.

“Hopefully, one day, this road will be over or under the railroad to Route 240,” Long said.

The other road connection will connect Park Ridge Drive to Hilltop Street through a future by-right portion of Foothills Crossing.

“The future plan for this roadway is to connect to Crozet Avenue, and it is anticipated that will be developed with the Barnes Lumber property when that is developed,” Falkenstein said. “Both roadways will have bike lanes, sidewalks and street trees.”

Riverbend also would dedicate land for a section of the Crozet greenway and a pedestrian tunnel under Eastern Avenue.

The development also sets aside a civic space, but how it will be used has not yet been determined.

“We are hoping to work with the residents of the neighborhood to design the space with the amenities that they want to have,” Long said.

The rezoning application was submitted before the Board of Supervisors rescinded the cash proffer policy earlier this year. Riverbend has agreed to pay $4,918 per single family home and $3,845 for single-family attached. Those amounts were recommended by the county’s Fiscal Impact Advisory Committee.

Riverbend also is proffering to build 15 percent of the units as affordable.

Only one person spoke during the public hearing and he said he was uncertain about the future roadways.

Kirby said he was concerned Hilltop Street cannot handle additional traffic, and he asked if there had been a traffic study.

Falkenstein said the Virginia Department of Transporation did not require one, but the future network of roads is informed in part by one that was conducted for the Barnes Lumber yard.

“It is a patchwork of various owners and projects working to build that,” Long said.

However, Falkenstein said Riverbend has not made written commitments to build certain elements shown in their concept plan. Her recommendation in favor of approval was based on those commitments being made before the proposal goes to the Board of Supervisors.

At least half of the homes would be single-family homes and at least 10 percent would be townhouses. However, the exact mix of units is not yet known.

Falkenstein said the final layout of neighborhood streets would be worked out at the site plan.

Both Chairman Tim Keller and Commissioner Karen Firehock said they were concerned that the plan was incomplete because of a lack of specific details.

“I think it’s going to be important for us to reach agreement on what extent of completion there needs to be done in the concept plan before we review it,” Keller said. “It puts us in a difficult position if they are not complete.”

Firehock compared the development to nearby Adelaide, which was recommended by the commission only after details about unit types were locked down.

“I do not feel comfortable moving forward with the level of information we have,” Firehock said.

However, Commissioner Jennie More said she felt she could support this rezoning because Riverbend is developing several of the adjacent properties.

The vote was 5-1 to recommend the rezoning. A date for the Board of Supervisors’ public hearing has not been scheduled.