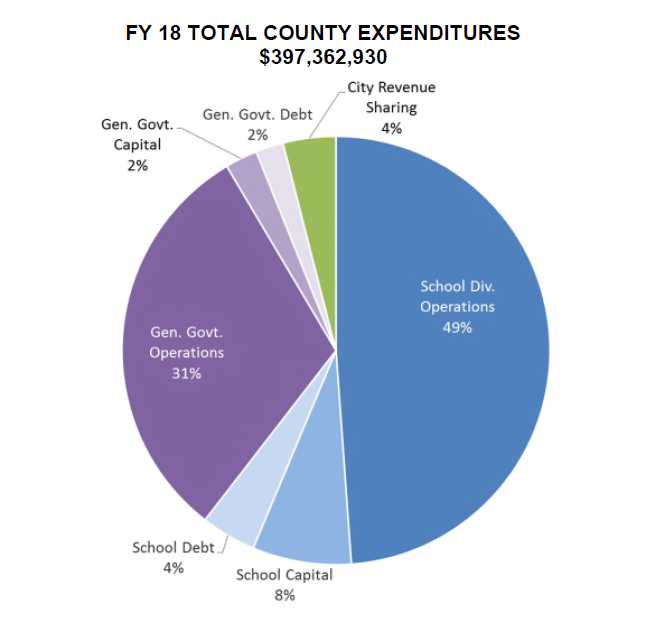 Higher than expected tax revenues have led the interim county executive to propose a $397.4 million budget for fiscal year 2018.

“This budget is balanced with no proposed increases in any tax rates for the upcoming year,” said Doug Walker. “It meets all the county’s obligations and mandates including our support for the school division.”

The budget is built off of a two-year fiscal plan approved by supervisors in December.

“That really lays the groundwork for what the Board will now see in the recommended budget,” Walker said. “That two-year plan also assumed no increase in the real estate tax rate or other tax rates.”

Supervisors will hold a public hearing on the recommended budget Feb. 21 at 6 p.m. in Lane Auditorium. The first work session on the budget will be held on Feb. 23 at 3 p.m. in Room 241 of the Albemarle County office building on McIntire Road.

“When we start on the work sessions next week, we will [discuss] revenue and expenditures,” said Lori Allshouse, the director of the county’s office of management and budget.

Virginia law requires localities to advertise the tax rate required to allow the county to adopt a budget with the same expenditures as the year before. That amount for this year is $0.809 cents per $100 of assessed value according to Allshouse.

“We were anticipating a 1.8 percent increase in assessed value and with the reassessment we are experiencing a 2.9 percent increase,” Walker said. “That has real dollars attached to it that we can talk about.”

The proposed budget is 5.8 percent higher than the current year based on a total revenue increase of $21.9 million. Walker’s proposed budget includes $17.4 million in increased expenditures.

“That is a significant strategic focus on facilitating desired development within our development area,” Walker said. “Part of what the community development department and county attorney’s office is hoping to accomplish [in the zoning ordinance] is to improve the readability and usability and improve the ease with which those who want to do business in the county.”

The current fiscal year contained $1.4 million in funds for neighborhood improvements, and the proposed budget adds an additional $200,000 to support those projects.

The economic development fund will received an additional $550,000 to match state grant opportunities and allow other opportunities to be pursued.

“It restores some funding to the capital improvement program that was diverted to serve operating costs two years ago,” Walker said.

A new “diversity/inclusion generalist” would be hired in the human resources department at a cost of $75,061.

“The purpose is to recruit and retain a workforce that is more reflective of the demographic of our community,” Walker said. “We have a particular interest for our public safety agencies.”

A new fleet management system would be created for the entire fire-rescue department.

A two percent salary increase for general government employees will cost $958,281. The school board budget also includes that same increase.

“We use what we call commonality so that we are positioning our support for our employees in a common way,” Walker said.

The budget contains $551,000 to address salary compression, a phenomenon in which new employee salaries match or exceed those of veteran employees.

Walker said compression particularly affects police officers and makes it difficult to hire experienced people. A plan to address compression was recommended for funding in the current year’s budget, but supervisors opted not to proceed.

The county will also contribute an additional $350,181 to help cover the cost of health insurance for employees.

The Acquisition of Conservation Easements program will receive $250,000 in the next budget.  An additional $1.5 million will go to match the Virginia Department of Transportation’s revenue-sharing program.

Several non-profits that had applied for funding through the Agency Budget Review Team did not receive funding in the recommended budget.