Albemarle School Board briefed on anti-racism policy amid arrests 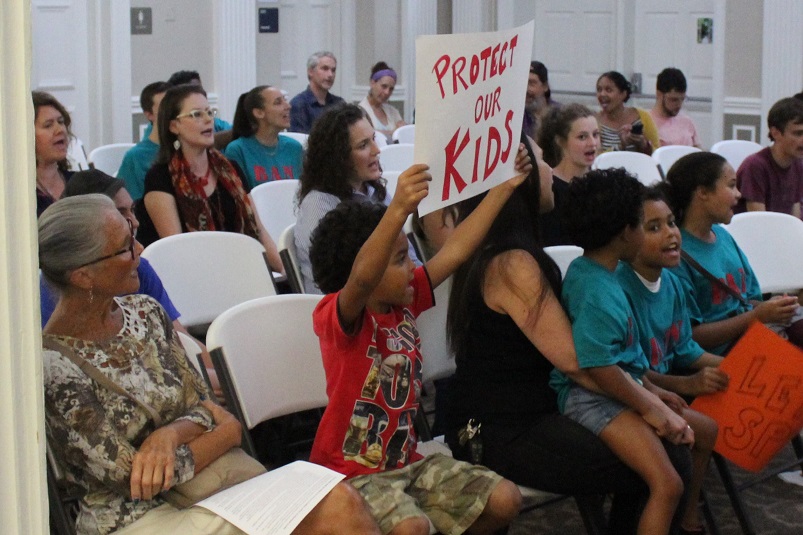 Minutes before the Albemarle County School Board was briefed on the school division’s forthcoming anti-racism policy, police on Thursday evening arrested several activists who came to demand a ban on Confederate symbols in the student dress code.

The Hate-Free Schools Coalition of Albemarle County held a rally in the lobby outside Lane Auditorium at the County Office Building-McIntire. The arrests began when their chants grew loud enough to be heard from inside the auditorium.

Four people were taken into custody in the lobby, according to Albemarle County police, and two also were arrested inside the auditorium. All six were processed at the Albemarle-Charlottesville Regional Jail, authorities said late Thursday. Their names have not been released.

After the arrests, anyone who had left Lane Auditorium was not let back in. Several protesters who remained in the room, silently held a banner that read: “RACISTS DON’T GET RE-ELECTED.”

State law is silent on whether citizens have the right to comment during meetings.

“The School Board’s focus tonight was on meeting its constitutional and legal responsibilities,” schools spokesman Phil Giaramita said in an email. “Tonight’s protest was a concern only to the extent that it could have once again disrupted the ability of the School Board to complete the business of the school division. That did not happen.”

“The School Board as a group was committed to getting through the business it was elected to do,” School Board Chairwoman Kate Acuff said in a statement. “Fortunately, with help from the county attorney and county police, we were able to do that. We strive to hold meetings in a civilized manner.”

In a Facebook post, the Hate-Free Schools Coalition said children who attended the group’s protest had been traumatized by the arrests.

“Tonight, we held a beautiful gathering to speak for the protection of our children who are being knowingly harmed by ACPS by their refusal to acknowledge racist incidents and ban confederate imagery within the school system,” the post reads.

In January, the school division removed Lee-Jackson Day from its calendar in response to comments from parents and members of Hate-Free Schools Coalition, and the division’s Office of Community Engagement held several meetings with community members, including representatives from coalition, in the spring.

Representatives of the coalition said the outcome of those talks was that schools officials agreed to present a draft of the dress code that included a ban of Confederate symbols.

On July 12, division staff presented a different draft of the policy that would have banned student dress promoting “hate-group related activities” as defined by the Southern Poverty Law Center. School Board members opted to continue a broader study of ways to combat racism in the schools before holding a formal reading of the proposal.

The amendment to the dress code policy the School Board was slated to consider on Aug. 23 would have encouraged a remedial approach to dress code violations related to gang activity instead of automatically disciplining the student. That amendment has been tabled.

“Tonight, we are recommending that any recommendations to the board on student dress to be adopted after the development of an anti-racism policy,” said Patrick McLaughlin, chief of strategic planning for the school division.

The Office of Community Engagement selected a group of students who were part of the division’s summer leadership academy to help draft an anti-racism policy. The division hired Kimalee Dickerson, a doctoral student at the University of Virginia’s Curry School of Education and an attorney, to facilitate the group’s work.

“We came together because we have noticed that [racism] has become part of the daily life we go through every day,” said Cyrus Rody-Ramazani, a senior at Western Albemarle High School.

Dickerson said the group would give the School Board guidelines for drafting the specific regulations of the anti-racism policy.

“That helps us make data-based decisions,” Haas said. “There are different apps out there. … We could also have our students develop the app that we could use.”

Bernard Hairston, chief of community engagement for the county schools, encouraged the School Board to see the bright side of Thursday evening’s conflicts.

“[The students] are getting a real-world experience,” Hairston said. “They are getting protesters. They are seeing how the board does its business. They are observing, they are learning.”

Hairston said the student work group could finish a draft of the anti-racism policy as early as October, but he would not commit to that as a deadline.

“We are going to take the time we need to get it right,” Hairston said. “With all of this chaos going on, this is a great opportunity.”