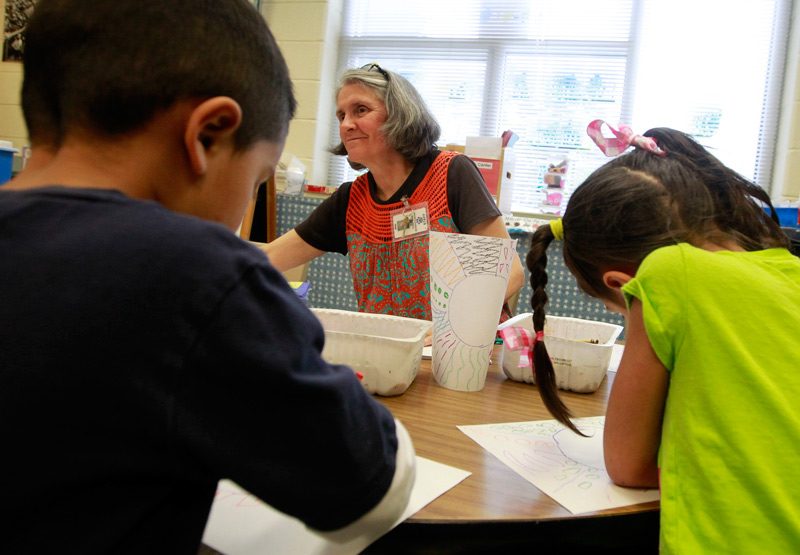 The Albemarle School Board is undecided over how to best serve a growing population of the county’s neediest preschoolers.

On Thursday, the board received the fiscal year 2014 annual report for Bright Stars, Albemarle’s program for at-risk 4-year-olds.

This conversation marked the elected body’s first meeting since Dan Rosensweig, president and CEO of Habitat for Humanity of Greater Charlottesville, last week called for preschool services to be offered in the Southwood Mobile Home Park — a neighborhood that will see between 50 and 75 children eligible for the preschool program this fall.

However, serving children in their neighborhood would break from Albemarle’s established model in which students attend their home elementary schools — a model that many School Board members have argued builds community with the families and eases what can be a hard transition for the children.

Ned Gallaway, chairman of the School Board, said his personal view would be to talk with other groups in the community interested in addressing the bottleneck that has seen the preschool initiative’s waiting list rise to as high as 90 in the last two years.

“If somebody like Habitat for Humanity, or other outside entities, want to start thinking about helping to provide places and serve as a partner, and I’m speaking as a School Board member, I would certainly be in favor of having that conversation,” Gallaway said.

School Board member Kate Acuff said she can see potential obstacles and benefits of having a satellite center.

“Challenges to having small satellite pre-K programs, such as one at Southwood, include security, isolation of staff and students, and additional costs for operations,” she said.

“However,” Acuff added, “[satellite centers] could work if the numbers of students were sufficient for more than a couple of classrooms and, perhaps, if they were co-located at other county facilities.”

“I believe the purpose of preschool is to get a child ready for school attendance,” Moynihan said. “For that reason it belongs in a school environment.”

School Board member Steve Koleszar said that housing the program in the schools is the best option because it builds community and because the children have access to the division’s support services, such as intervention specialists who assist struggling students. But, he said, if the school division lacks the space, then he is not opposed to locating a program elsewhere.

Additionally, Koleszar noted that Habitat’s desire to house pre-K in Southwood hinges on the nonprofit’s plan to redevelop Southwood into a mixed-income neighborhood, and said that the presence of a preschool facility would be a draw.

When asked which option she preferred, Ann McAndrew, who coordinates Bright Stars, said that while there are advantages to both approaches, the idea of “starting something completely new” is appealing, and noted that she recently attended a meeting in which a public-private partnership to expand preschool services in Albemarle was discussed.

The preschool issue is coming to a head as the division is facing K-12 enrollment growth that is causing capacity concerns. What’s more, the elementary schools that are seeing some of the fastest-growing K-12 populations — Greer, Agnor-Hurt, Cale and Woodbrook — are the same schools that are seeing increased pre-K demand.
“What we have is an inner ring of schools that make up almost that entire waiting list,” McAndrew said.

“As a result, there are fewer and fewer classrooms available to expand the pre-K program in the schools,” Acuff said.

“If the only debate was where we put them, that would be great, but right now we’re just trying to figure out what the demand is and provide it, period,” Gallaway said.

This year, Bright Stars serves about 160 students in 10 classrooms at eight schools, though some of those children are supported by federal Title I and Head Start funding.

School officials estimate the total number of 4-year-olds in the county who would be eligible for Bright Stars on a yearly basis at 230, which is based on the division’s kindergarten free- and reduced-price lunch population.

Officials from Albemarle’s Department of Social Services — which jointly administers the program with the schools — said they believe 230 to be a reasonable approximation.

Simultaneous to the debate over where to locate potentially expanded services, the Board of Supervisors is considering an expenditure of $224,888 to add two more Bright Stars classrooms next year, though no specific schools have been identified.

Kathy Ralston, director of social services, said supervisors have included the expenditure on a list of considerations that will be presented to the public during upcoming town hall meetings.

Last week, John Freeman, Albemarle’s assistant director of social services, said that it might be appropriate for Albemarle to consider offering additional pre-K services, which would result in the “expansion of a network of pre-K services.”

“It may well be that [Albemarle County Public Schools] and the county have to step back and assess whether there are other models of pre-K that can work,” Acuff said. “I think this needs to be done because everyone agrees that quality pre-K makes a huge difference in student readiness for school.”