Albemarle School Board presented with options for high school expansion 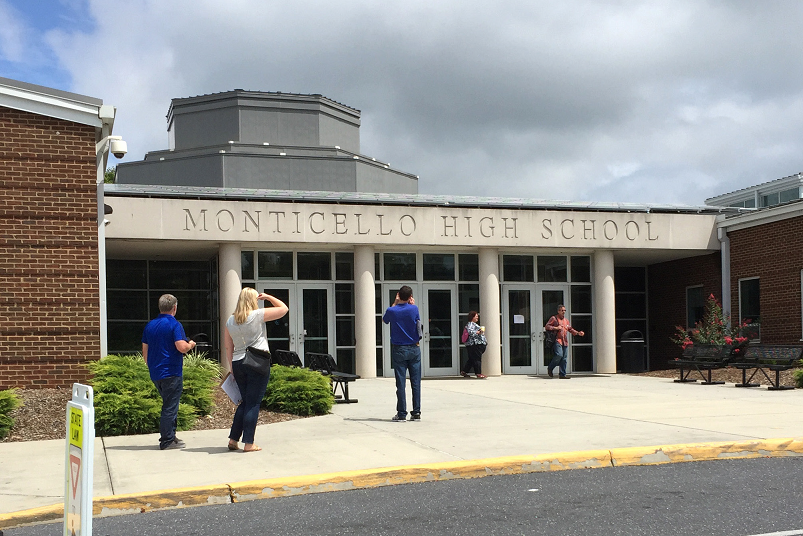 “We have to look at what the competition is doing around the world and around the country, and do what makes sense for the benefit of our kids and their education,” said Board member Jonno Alcaro.

Since last year, Albemarle’s High School 2022 initiative has generated ideas for expanding student-designed, interdisciplinary and community-based learning experiences throughout the school division. High School 2022 is influenced by the Virginia Department of Education’s “Profile of a Virginia Graduate,” which will recommend new high school graduation requirements applicable to freshmen beginning in 2018.

Representatives from HBA and Fielding Nair told the School Board on Thursday that enrollment at two of the county’s comprehensive high schools would exceed their capacities within the next decade.

Albemarle High School, which currently enrolls 1,973 students, has already exceeded the capacity of the main school building. The school division projects enrollment at AHS to increase slowly over the next ten years, peaking at about 2,150 in 2024.

The division forecasts much more rapid growth at Western Albemarle High School  in Crozet. Enrollment at WAHS is expected to increase by more than 21 percent, reaching a high of 1,335 in 2024.

A planned 10,000 square-foot addition of science classroom space at WAHS, scheduled for completion in 2019, was not factored into the study’s capacity calculations.

Enrollment at Monticello High School, now at 1,125, is projected to decline slightly in the coming decade. Murray High School, Albemarle’s public charter school for at-risk students, can set limits on its enrollment.

The first option presented to the School Board was to build a new comprehensive high school on a 61-acre site near the intersection of U.S. 29 and Rio Mills Road, which the county received as a proffer for the Brookhill subdivision.

In this scenario, the division’s comprehensive high schools would have roughly equal enrollment once the fourth high school opened. Redistricting would result in dramatically reduced enrollment at Albemarle High School; the consultants estimated that it would have only 1,164 students by 2024.

The consultants recommended repurposing 23,000 square feet of space at AHS to serve alternate school division needs if the new high school was built. They estimated that this would cost $5.2 million.

At $90 million, the new high school was the most expensive project proposed in Thursday’s presentation. An additional $4 million would be needed to grade the land and remove rocks at the Brookhill site.

“It’s a challenging site [to build on]… and it’s also quite isolated,” said School Board chairwoman Kate Acuff. “The redistricting would be significant, and the disruption of the existing feeder patterns would potentially be enormous.”

In another scenario, the Brookhill site would house a high school center for electives and experiential learning experiences, open to all students in the division. The center would be large enough to host 800 students, has a projected cost of $58.1 million.

Isaac Williams, principal at Fielding Nair, said the center could offer courses taught by professionals working in various fields, or have students support the efforts of innovative startups in a co-working space.

The final scenario was a “village” concept that would include at least two smaller satellite centers, each large enough to host 400 students. The consultants suggested placing one near Albemarle High School, and another somewhere between Monticello High School and Western Albemarle.

Williams said the village model would require a circulating bus service to transport students to and from their base schools, as would a single high school center.

“Strategically placing these centers in the community opens up new opportunities to students that aren’t available at their high school site,” he said. “When we think about this issue of equity, we have to consider… how to bring more opportunity to students who live further away.”

The projected cost of building the two smaller centers is slightly over $38 million.

Stephen Koleszar, Scottsville representative on the School Board, said he favored the village model.

“A distributed model like this would allow us to draw students from all over the county… so we could have robust programs with critical mass,” he said. “High schools with fewer than 1,200 students don’t have the critical mass for really dynamic programming.”

Rio District representative Pam Moynihan said division staff needed to solicit extensive input from the public before proceeding with any of the proposed options.

“I’m really concerned that you are presenting this stuff to us, and it hasn’t been adequately socialized among students and especially among parents,” Moynihan said.

Board member Jason Buyaki said he would like Albemarle’s high school planning to be more focused on online learning.

“I really see this as a critical piece for us,” he said. “We can solve a lot of our equity problems by implementing online learning.”

“This modernization would be above and beyond what we are currently doing,” said Rosalyn Schmitt, Assistant Director of Facilities Planning for the county school division. “This would be a much more comprehensive approach to it.”

Albemarle voters passed a $35 million bond referendum in 2016 to pay for additions, renovations, and improvements to existing school buildings throughout the county. The county’s previous bond referendum took place in March 1974, to finance the construction of Western Albemarle High School.

Williams said the full modernization of the three comprehensive high schools could enable each to offer new specialized academic programs.

Thursday’s presentation included research on the demographics of the county’s three specialized academies: the Math, Engineering and Science Academy at Albemarle High School; the Health and Medical Sciences Academy at Monticello; and the Environmental Studies Academy at Western Albemarle.

The consultants found that students enrolled in the academies tended to live near their respective programs, and were most concentrated in areas with high median household incomes.

Superintendent Pam Moran said inability to provide transportation has forced many students to turn down offers of acceptance to the academies, or has discouraged them from applying.

Fielding Nair and HBA will present their final high school facilities report and recommendations to the School Board in December.

The Albemarle County Board of Supervisors has dedicated $100,000 in its Capital Improvement Program to high school planning in the current fiscal year, and $400,000 in FY2018-19.