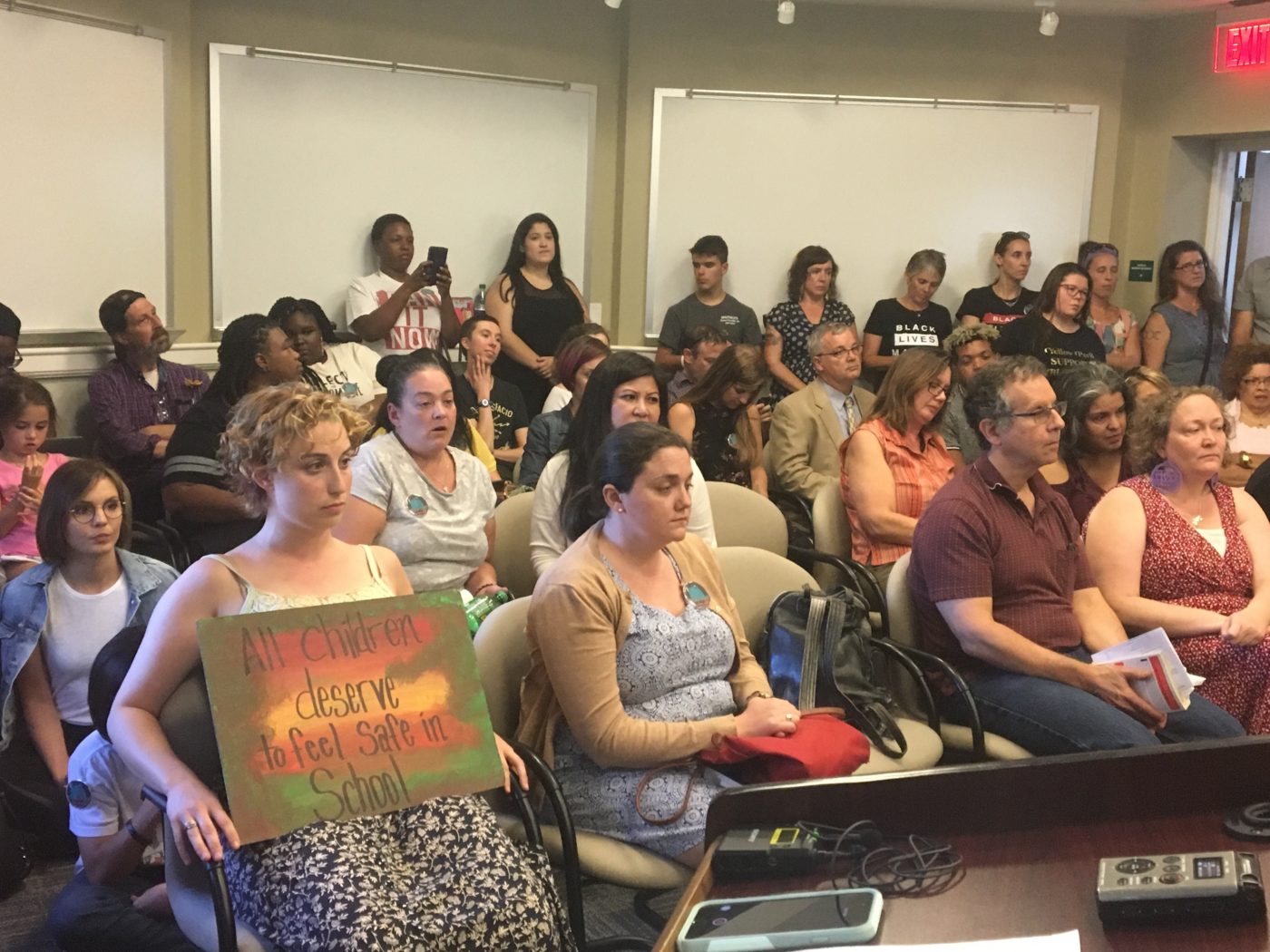 The Hate Free Schools Coalition of Albemarle County has called for the county School Board to ban Confederate symbols from student dress and school property.

A protest by the Hate-Free Schools Coalition ended the Albemarle County School Board’s work session minutes after it began Thursday.

Members were scheduled to vote on a revised student dress regulation that emphasizes “respect for diversity” but stopped short of explicitly banning Confederate symbols.

“I wish the meeting would have gone better,” School Board member Graham Paige said. “I’m not sure what we could have done to make it go better.”

The Hate Free Schools Coalition of Albemarle County has led an effort this year to ban the Confederate flag from student dress and county school property.

Albemarle’s Office of Community Engagement held three meetings with community members this spring. Representatives of the Hate-Free Schools Coalition said the school division agreed to present a draft of the dress code that included a ban of Confederate symbols.

On July 12, division staff presented a different draft of the policy that would have banned student dress promoting “hate-group related activities” as defined by the Southern Poverty Law Center. The School Board opted to study other ways to combat racism in the schools before holding a formal reading of the proposal.

Lara Harrison made the first and only public comment at Thursday’s work session. She said the division’s chief of community engagement, Bernard Hairston, and members of the School Board have refused to meet with Hate Free Schools since the July 12 meeting.

“The Office of Community Engagement is unequipped or unable to bring voices of the most marginalized to the table,” Harrison said.

School Board Chairwoman Kate Acuff called for a 10-minute recess after Harrison finished her comment, saying that people who snapped their fingers and cheered during comments would be removed.

“When cheering is loud, some people will be intimidated and afraid to make a public comment,” School Board member Stephen Koleszar said.

Acuff adjourned the meeting after protesters continued to speak out of turn.

School Board member Katrina Callsen said she wished the School Board could have gotten through the meeting.

“I would have liked for people to feel like they were heard,” Callsen said.

After the meeting was adjourned, protesters gathered outside the County Office Building-McIntire and delivered the remarks they had planned to share with the School Board.

Harrison said to Charlottesville Tomorrow that “the School Board fails to engage with their community members, and they are purposefully ignoring case law that does support banning Confederate imagery in schools. [Albemarle County Public Schools] does not take views from the community if they are pushing back.”

In 2013, the U.S. Fourth Circuit Court of Appeals upheld the Latta, South Carolina, school district’s ban of Confederate flag images on student dress, which was challenged in a lawsuit by a student. The court ruled that Confederate symbols could excite racial tensions in the school district and create a substantial disruption in the school environment.

Acuff said before Thursday’s meeting that the School Board understands that the Confederate flag is offensive to many people.

“But it also doesn’t mean that our job is to circumvent the free speech of our students by passing a content-specific dress code,” she said.

In a landmark 1965 case, Tinker v. Des Moines, the U.S. Supreme Court ruled that the First Amendment applied to public schools, and school officials could not censor student speech unless it disrupted the educational process.

“The Supreme Court has been quite explicit in Tinker v. Des Moines that students don’t leave their right to free speech at the door,” Acuff said. “We don’t want to be the test case to go to the Supreme Court again.”

Albemarle was punished for violating a students’ right to free speech in 2003. The School Board lost a $150,000 lawsuit to a sixth-grader who wanted to wear a National Rifle Association T-shirt to class.