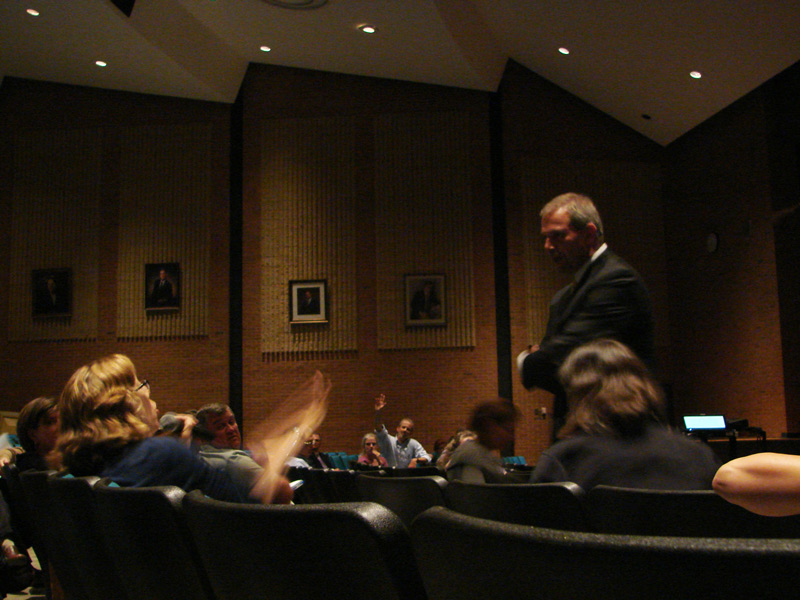 In response to calls from parents to stop reporting class rankings to college admissions offices, Albemarle County Public Schools is in the process of reviewing its policy.

Currently, Albemarle reports class ranks to colleges and universities in deciles, but many parents feel that doing so paints students below the top 10 percent negatively in the eyes of selective universities.

Former college admissions officer Fred Smyth is among them.

“It’s this idea that the ranks are real, meaningful, and have objective meaning,” Smyth said during a parent meeting at Western Albemarle High School Wednesday. “I saw cases at Georgetown where a school like Western Albemarle would have 30 students tied at the top with the same GPA, and the first [student] one one-hundredth of a point down didn’t make the top 10 percent.”

“Yet if you didn’t have rankings and you just present the GPA…they still look at the whole pool of applicants from Western but the perception isn’t skewed,” Smyth added.

But Western Albemarle parent Elizabeth Ferrall said to stop reporting decile rankings would be unfair to those students who have earned it.

“Look at what the kids are doing,” Ferrall said. “It means a lot to them to be recognized on the level playing ground that they are competing on.”

“They know the world is a competitive place and they are choosing to compete on the academic arena,” Ferrall added. “To take that away from them is really unfair for all the work that they’ve put in to get into the top 10 percent.”

Western Albemarle parent Erica Wheat said the culture of competition, to take as many Advanced Placement courses as possible in order to be ranked in the top decile is steering students away from their interests.

“I think what’s happening is that it’s turning into an academic arms race,” Wheat said. “Not only are you taking all of your core subjects at the AP level, there’s a disincentive for somebody to study music or do journalism or take leadership.”

“So I hate the idea of kids taking like 7 AP classes and a study hall so they can boost themselves into the top 10 percent,” Wheat added.

Henry Broaddus, Dean of Admissions at the College of William and Mary, said less than 40 percent of their enrolling students come from divisions that report class rank, and that a student’s transcript carries the most weight.

“In our process and in other selective places, your transcript is the single most important factor,” Broaddus said. “It shows how well you’ve done and how much you’ve challenged yourself.”

“Where a lot of the anxiety of this issue starts is that someone thinks that a school is looking at rank or GPA in a vacuum,” Broaddus added. “But we know that you’re dealing with apples and oranges within divisions and across counties.”

Gregory Roberts, Dean of Admissions at the University of Virginia, said that only about half of the applications they receive include class rank, and that his department evaluates students holistically.

“There are no formulas, equations, or graphs,” Roberts said. “We’re looking at a variety of items.”

But there are circumstances, Roberts said, that a division’s choice not to report could effect a student.

“If you’re the number one student, but now they don’t rank, that doesn’t help you,” Roberts said. “Not ranking probably has a negative impact on the top students and helps students at the margins.”

Additionally, Roberts said, reporting class rank can help a student who is applying to a selective school that’s unfamiliar with his or her school division.

“While the trend seems to be across the country that fewer and fewer schools are not reporting,” Haun added, “some of those people we compare ourselves to are still reporting rank.”

Of the 4, only Fairfax County does not report scores.

Among concerned parents, there is also a push for Albemarle to make the change effective for seniors applying to college this fall. In order to do so, the school board would have to vote to change the division’s Program of Study.

School Board Member Diantha McKeel was hesitant about making a change effective this school year.

Staff are expected to make a recommendation on whether or not to stop reporting ranks and when that change would be implemented at the School Board’s October 10 meeting.