Albemarle superintendent Moran to retire in 2018, Haas chosen as successor 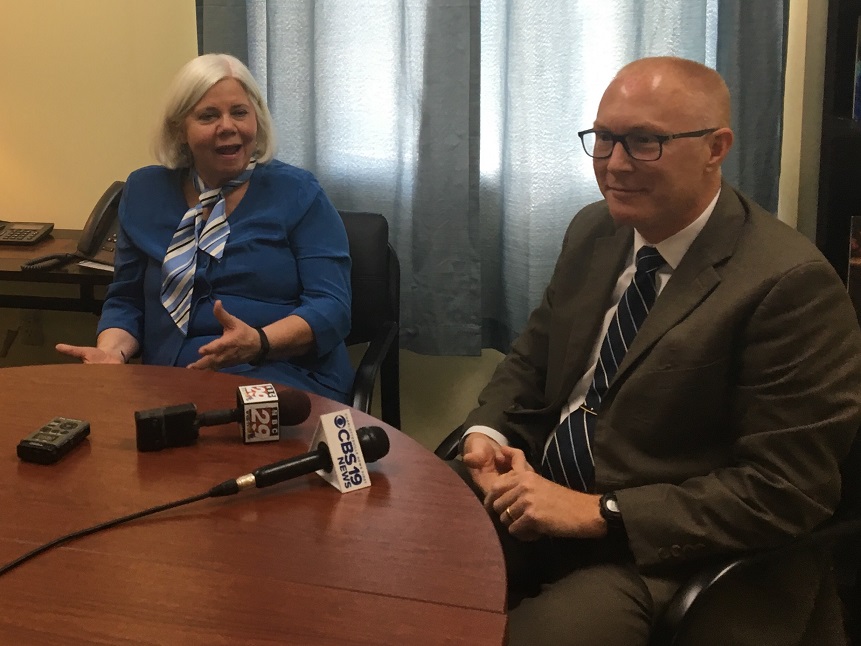 Pam Moran announced her retirement as Superintendent of Albemarle County Public Schools at a media briefing on Sept. 28, 2017. The School Board has chosen Deputy Superintendent Matt Haas as her successor.

Albemarle County Public Schools Superintendent Pam Moran on Tuesday announced that she will retire on June 30, 2018.

“It has been a privilege for me to be associated with Albemarle County Public Schools, a division of leaders at every level,” Moran said.

“This is a very humbling experience for me,” said Haas. “I am very grateful to the School Board for their confidence in me, and for offering me this incredible opportunity.”

“I have always appreciated being the first female superintendent in the county that Thomas Jefferson lived and breathed in, because he was not a fan of educating women,” Moran said. “I would like to think he would really embrace where we are in public education today.”

Moran’s 13-year tenure as superintendent will be the second longest in the history of Albemarle County Public Schools. Gina Patterson, executive director of the Virginia School Boards Association, said the average tenure for superintendents nationwide is about four years.

Moran has overseen the implementation of a countywide maker curriculum and an instructional coaching model for teachers’ professional development. During her tenure, each comprehensive high school added a specialized academy for a STEM subfield.

Moran said she was proud to have guided the county’s heightened strategic focus on improving outcomes for economically disadvantaged students. The $1.28 million Equity and Access initiative in this year’s budget is paying for additional staff at several elementary schools to support students’ social and emotional development.

“We have taken a step towards taking on what I see is the grand challenge of public education in the United States, in our state, and in our community,” Moran said.

“The impact [Moran] has had in her role as superintendent has been beyond extraordinary,” said School Board Chairwoman Kate Acuff. “The true test of leadership is the ability to make the lives around you much better. Dr. Moran did that with great distinction for more than 35 years throughout her career in education.”

Moran declined to request an extension of her contract in 2016. Acuff said the School Board vigorously debated in closed sessions whether to initiate a public-facing, external search for a superintendent, before proceeding to appoint Haas.

“The rationale for bringing in outside vision isn’t very persuasive to me when you balance it against the disruption and the learning curve that any new person would need to have,” Acuff said.

“The main reasons for looking outside is when your school division is not performing well— ours is— and, when you don’t have one with the skills to take over— we do,” she said. “We were absolutely persuaded that Matt was ready to be a superintendent, and we decided that we wanted him to be our superintendent.”

“I would assume that some people will be delighted, and that some people would have liked [the process] to be more open,” Acuff said. “I’m sure there are people who will criticize the process… but I think this is good for the community, and for Albemarle County Public Schools.”

Acuff said Haas was interviewed extensively by Board members, and was required to submit a plan of action for his first year as superintendent.

Haas was principal of Albemarle High School from 2004 to 2009. He served as an executive director and an assistant superintendent in the division’s central office before becoming deputy superintendent in 2015.

“A principal has to be able to understand and relate to communities that can look very different, whether they are urban, suburban or rural,” Moran said. “Matt brings this expertise from his time as principal of the largest high school in Albemarle County… and from prior experience in other school systems as well.”

Haas has been closely involved in High School 2022, an initiative to redesign the county’s high school curriculum and generate ideas for new high school facilities.

“When you break away from that model of ‘three kingdoms’ that are separate and often competing with each other, and say, ‘Let’s put them all in the same pool”… you build equity, and you build understanding that this is a school system, not a system of schools,” he said. “One of my priorities is to put that system together.”

Haas said he would conduct a listening tour in his first months as superintendent to hear from stakeholders around the county.

“I’m going to treat it as if I had come in from the outside,” Haas said. “I’ve built a lot of cultural knowledge about the school division over time. I know the facts and figures, and I know the people. … But I really need to see it from [Moran’s] vantage point, which is a whole other ball game.”

Moran said being able to partner with her successor on key initiatives this year will enable “an incredibly smooth transition.” She said she looked forward to working with Haas on a funding request to the School Board before her departure.

Haas said he would remain focused on his current role as Deputy Superintendent until he is promoted next summer.

“Until July, I’m all in with Pam,” Haas said. “My main job right now is to support Pam and the School Board.”