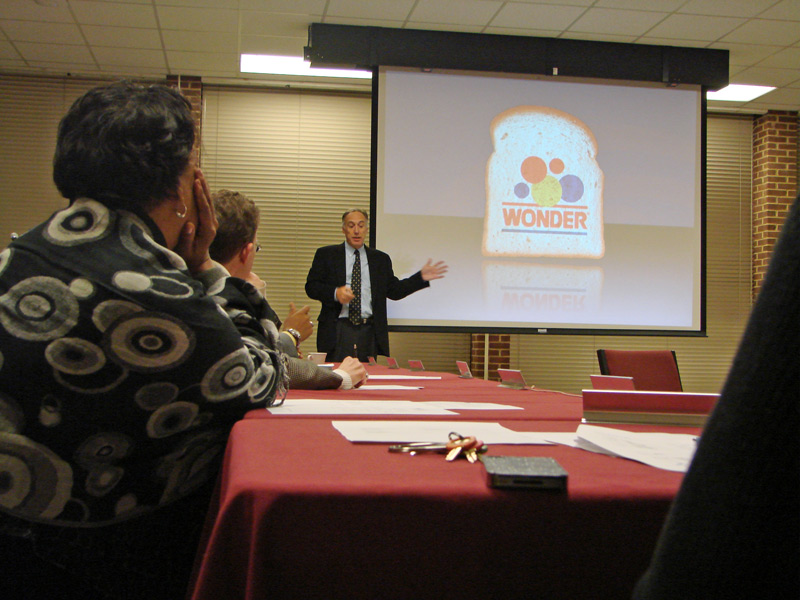 John W. Martin, CEO and president of the Richmond-based market research firm Southeastern Institute of Research, talks to the Charlottesville and Albemarle school boards about the future of education

In the coming weeks, a team of local schools officials will analyze the pros and cons of relocating the Charlottesville Albemarle Technical Education Center to the campus of Piedmont Virginia Community College.

Ultimately, the group will be weighing the cost of renovating the existing facility in Charlottesville against the cost of selling that facility and building a new structure at PVCC, before returning to the CATEC Board with information.

While the Albemarle and Charlottesville school boards reached consensus on the matter during a joint meeting Tuesday, the move didn’t come without encouragement from others close to the project.

“Frank is offering you all a wonderful opportunity for our children, for our community,” McKeel said. “Work with us, don’t let dollars stop you.”

“This building has been great for 40 years,” McKeel added, “but it’s time to move on.”

Grant Tate, co-founder of the consulting firm the Bridge, Ltd—who designed CATEC’s strategic plan—said he felt that the new location was the plan’s “next level.”

“To think that you could put students of the future in this building is a bad thought,” Tate said. “You need a center that is networked where you can put the people with the expertise to develop it.”

As for implementing the plan, CATEC interim director Bruce Bosselman said that they had decided to begin with the Healthcare Service Institute, but that the details of doing so are still being worked out.

Tuesday’s strategic plan update and facility question was preceded by a presentation from John W. Martin, CEO and president of the Richmond-based market research firm Southeastern Institute of Research, about the future of education.

“How do we help the community
understand that there are other paths
than the four-year college?” McKeel
asked. “When I ran for school board
I would knock on doors and parents
would say that CATEC is great
for every kid but mine.”

The increase in computing and automation, Martin said, is going to lead to a job shift because technology “is going to push jobs down into the low wage category.”

As a result, Martin said, communities, and thus educators, should focus on the cognitive jobs by teaching their young people the skill of acquiring new skills.

In large part, Martin’s presentation centered on the millennial generation, whom he characterized as confident, civic-minded, hyper-connected and fearless. But Martin also argued that many millennials were over parented, and as adults, can have a difficult time navigating systems on their own.

So Martin stressed the importance of offering students internships.

“The way the kids are going to learn the best is for them to be right in the moment learning,” Martin said. “Let them go be a part of the community from an early age.”

Charlottesville School Board member Colette Blount asked how they could encourage the business community to offer paid internships so students aren’t forced to choose between a promising career opportunity and the typical summer job.

“You’ve got to tap into the families who make up your schools,” Martin said. “Tell them that we want to improve and that it won’t happen without your help.”

What’s more, Martin said, is that more families should consider post-high school options other than college.

Supervisor Ann H. Mallek agreed and said the message being sent to students through the guidance departments needs to change.

“How do we help the community understand that there are other paths than the four-year college?” McKeel asked. “When I ran for school board I would knock on doors and parents would say that CATEC is great for every kid but mine.”

Martin suggested hosting a community forum on the issue.

The challenge of changing public perception comes at a time when CATEC is seeing its enrollment drop. As of Oct 21, only 256 Charlottesville and Albemarle students attend the school. Last year’s enrollment on the tenth day of school was just over 300.

“It’s an area of concern, and we need to find ways to improve that,” Bosselman said. “I’ve been here for 16 years and I’ve seen it low, but never this low.”

“That said, we’ve eliminated two programs, but we haven’t replaced them,” Bosselman added, referring to barbering, green technology/masonry, which were cut due to low participation.

“It’s the loss of programs that’s hurt us,” Gannon said. “We have fewer programs than we’ve ever had.”

The technical education center now offers nine programs. The Pharmacy Tech program has not been formally eliminated, but isn’t running due to a lack of a teacher.

Bosselman said another factor contributing to declining enrollment is the amount of opportunities offered to students at the comprehensive high schools.

“The more choices that are offered in the high schools…the less chance those students would want to come to CATEC,” Bosselman said. “So I’m looking at how we can differentiate CATEC from all of the other options students have.”

Albemarle superintendent Pam Moran said that some interested students have difficulty creating a schedule that aligns with CATEC.

“We’re hearing that if we can’t figure out how to create flexible schedules…that [we’re] going to see loses,” Moran said. “We need to look at flexibility in creating schedules as we continue with the strategic plan.”