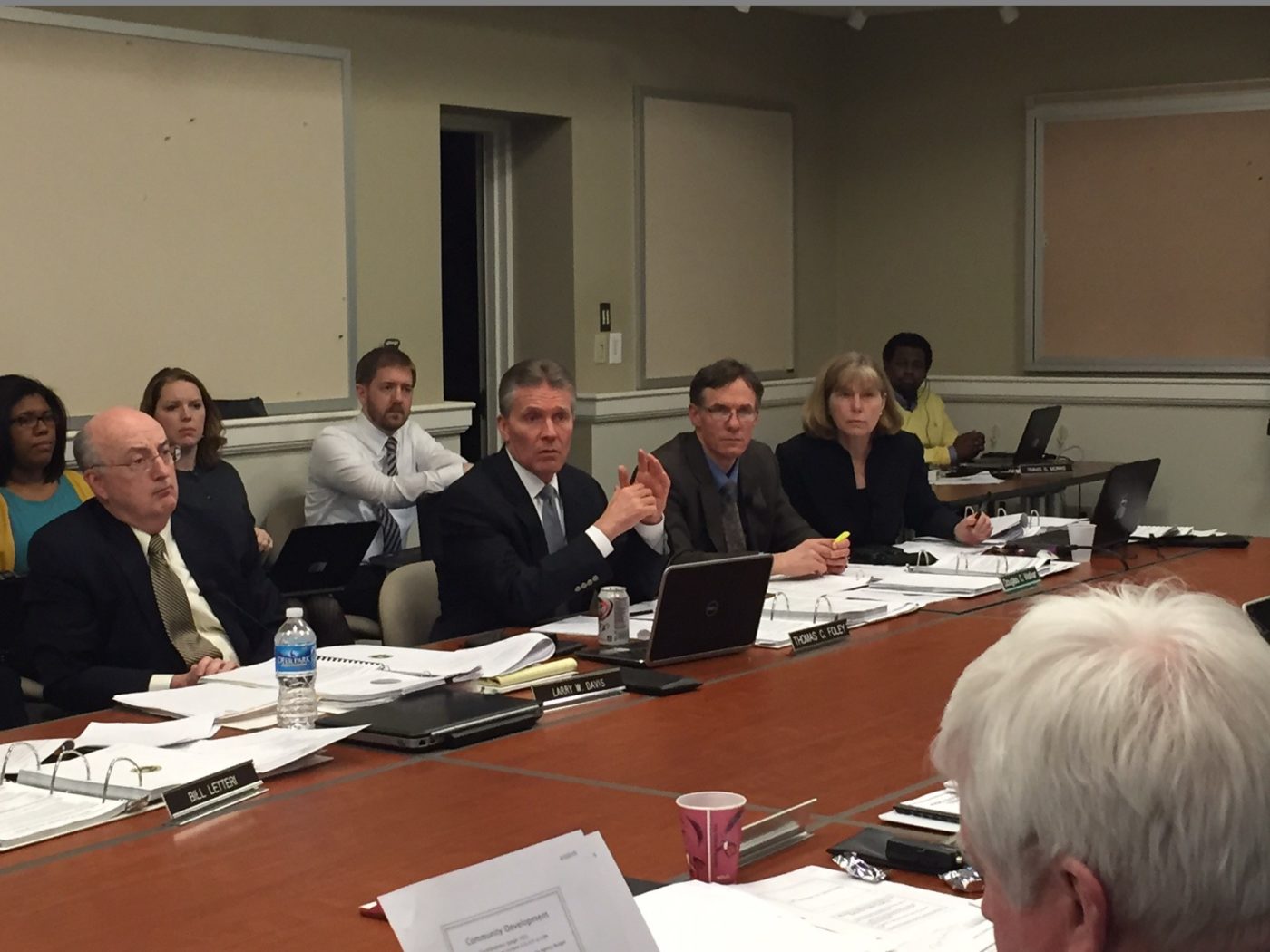 The Albemarle Board of Supervisors voted Tuesday to advertise a real estate tax rate of 82.4 cents per $100 of assessed property value, a 2.5-cent increase over the county’s current rate and a cent and a half higher than the rate that had been recommended by the county executive.

“We’ll continue our process with some room to evaluate some of the things that may hold value to individual supervisors,” said board Chairwoman Jane Dittmar, who voted with Supervisor Kenneth C. Boyd against the rate.

“What this means is that [supervisors] set a tax rate that you cannot go above, but you can go below,” said Lori Allshouse, the county’s budget director.

Because Albemarle property values have risen, the county also must advertise an equalized tax rate — the rate that would bring in the same amount of revenue as the current fiscal year. That amount is 75.6 cents per $100 of assessed value.

The current rate is 79.9 cents per $100 of assessed value. Every additional penny on the tax rate is projected to bring in $1.6 million in revenue.

The four supervisors who voted for the higher rate said they did so to allow flexibility while they continue their budget review.

“We’ve had two weeks to look over [the] proposed budget, so while we’re setting this at 82.4 cents, there is clearly a lot of discussion that needs to be had with our citizens and between supervisors about what direction we are going,” said Supervisor Brad Sheffield.

Supervisors are next scheduled to discuss the budget at a work session March 11. Before then, staff will calculate how much it would cost to fund some of the requests supervisors made Tuesday.

Decisions on which priorities will receive appropriations will be made at that time. The board’s budget will be advertised for public review and the first public hearing is set for 6 p.m. April 1. The board is expected to adopt a budget April 14.

Tuesday’s work session was a chance for supervisors to review County Executive Thomas C. Foley’s proposed budget for general government operations and suggest initiatives they would like to fund or reduce.

The public safety budget is projected to increase by 8.9 percent to a total amount of $37.9 million. Part of that increase is due to the hiring of an additional five police officers to keep up with population growth and established public safety guidelines.

“The national standard for the Department of Justice is 2.5 officers per 1,000 residents,” said Ron Lantz, the county’s deputy police chief. “In Virginia counties, the average is 1.6 officers, and we’re at 1.29 officers and we rank last among county police departments.”

However, the five positions recommended by Foley did not include an officer dedicated to traffic safety and enforcement.

“That’s a priority of mine, especially in the development area,” Sheffield said. The item was then added to the list of funding requests.

The health and welfare section of the proposed budget totals $19.8 million, a 2.2 percent increase over the current fiscal year. Some of that increase will be set aside for overtime for social workers due to heavy caseloads. Two new employees will be hired in that area, but one supervisor said that wasn’t enough.

“They could really use five more people because they’re down, according to state standards,” said Supervisor Ann H. Mallek. “But two is better than none, but we still need more.”

The community development department’s proposed budget is $7.1 million, a 4.4 percent increase. That is due in part to the creation of an office of economic development and the establishment of another zoning enforcement position.

A request from the Natural Heritage Committee to dedicate a quarter of a planner’s time to assist its work was not funded. Several supervisors requested that another way be found to accomplish that goal.

Another decision remaining to be made is how the additional money raised will be split between general government and the school system.

That could determine the outcome of the county’s school modernization program. While there is $1 million set aside in next year’s recommended capital improvement program, no funding has been identified to continue the program after June 2016.

The board also is considering how to fund infrastructure investments going forward. Revenue possibilities include a bond referendum, special tax districts and real estate tax increases.

Dittmar pointed out that the county raised the property tax rate last year from 76.6 cents to 79.9 cents and suggested supervisors take a big-picture look at the county’s total needs before raising taxes again.

“I’m worried that we’re going to get into a tax increase fatigue,” Dittmar said.

However, other supervisors said they think the county needs to continue to increase investment in infrastructure and services to keep up with a growing population.

“What we really need is a target for our capital improvement program of what we’re going to get done,” said Supervisor Liz Palmer said. “[But] if we do nothing this year or do little, we’ll fall more behind.”