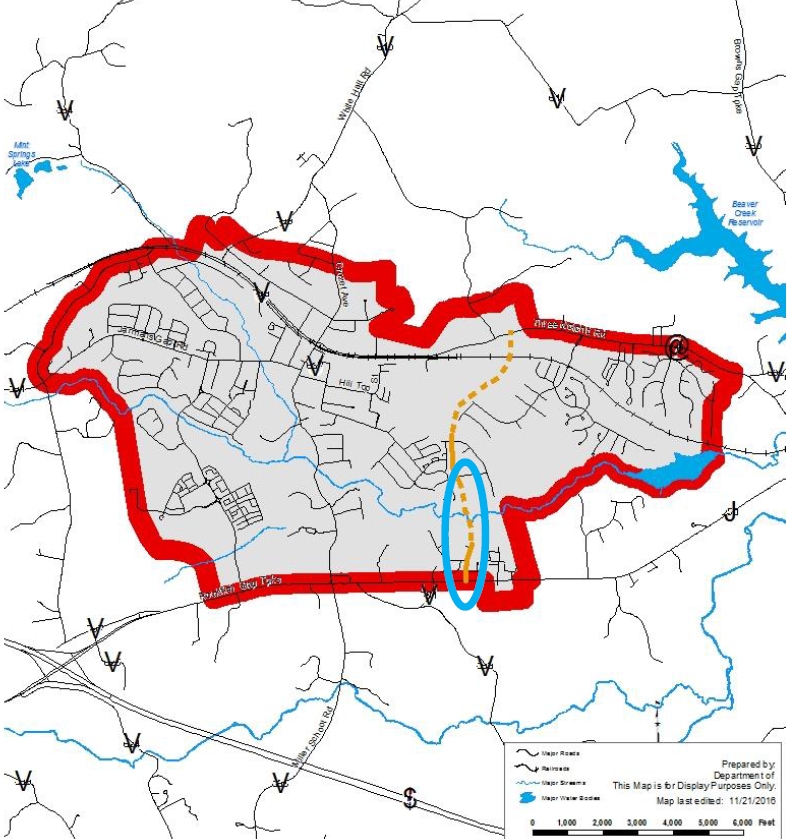 The Albemarle County Board of Supervisors will consider special tax areas called service districts to help pay for long-awaited infrastructure projects such as Eastern Avenue in Crozet.

“Service districts are geographic areas established by the Board of Supervisors, and that would be done by ordinance,” said Deputy County Executive Doug Walker. “The county within a service district may levy and collect an annual tax on real property to pay for facilities to be authorized within the district.”

A multimillion project to expand the sidewalk network in the urban area also will be considered.

Supervisors were briefed on the concept Wednesday. County staff have been searching for new ways to help pay for infrastructure in a crowded capital improvement program.

Closer to home, the Albemarle County Service Authority created a special rate district to fund the $10.7 million North Fork Regional Pump Station several years ago. An additional fee for properties served by the sewer project went into effect in 2012 and will expire in 2042.

“On the advantageous side, they do provide for specific facilities or services in a targeted manner, and those facilities and services may be provided more quickly than otherwise,” Walker said.

However, Walker acknowledged some will resist paying a higher tax.

“It may be perceived by some as being unfair,” he said.

Walker said the idea would be new for Albemarle County government and it will take some time to work through the details.

“It could have some effect on bond ratings and interest on debt,” Walker said. “It does constitute a debt of the county.”

One hypothetical would be a $10.5 million project in Crozet to build the first phase of Eastern Avenue, including a bridge over Lickinghole Creek.

“It is a project in a master plan and a project already defined in the capital needs assessment,” Walker said. “It’s not been funded, but it’s been identified.”

Under this scenario, 60 percent would be paid by the state and the rest would come from the special tax to be paid by property owners within the district over a 20-year period.

“Eastern Avenue is a major connector that would ultimately connect U.S. 250 and Route 240,” Walker said. “There is a section of it that has already been constructed.”

In the second hypothetical, some areas of the urban ring would be taxed to pay for up to 12 miles of new sidewalks identified but not funded in the capital improvement program and the capital needs assessment.

Supervisors were generally supportive of the idea, with some reservations.

“What happens sometimes when you isolate service districts a little too much is that poor neighborhoods with lower-assessed values tend to suffer from a less amount of infrastructure because the correlating funds aren’t there,” said Supervisor Brad Sheffield.

One supervisor said the concept could help specific areas campaign for localized infrastructure, should they choose.

“There is a lot to learn for all of us about different ways to implement this,” said Supervisor Ann H. Mallek. “The one good part of it that I see is that it would establish a pot of resources for each of these years and that bucket would be something local residents could work towards, figuring out the best ways to leverage that money.”

Neil Williamson, of the pro-business Free Enterprise Forum, called the idea a “super tax” that the county should not pursue.

“This is a seismic shift in your planning directives,” Williamson said. “For 30 years, the plan has been to focus the population growth in 5 percent of the county and to make that 5 percent so attractive that people would want to live there.”

Williamson added that higher taxes in the urban area would push people to the rural area.

However, Supervisor Rick Randolph said, some residents in the urban areas have demanded more amenities, and this might be a way to help fund them.

“This is driven because of a series of expectations and pent-up demands of our residents,” Randolph said.

Walker will return to the board with more specifics within the next four months. At that time, he will be the interim county executive, as current Albemarle County Executive Tom Foley announced Wednesday he will take a similar position in Stafford County, effective Feb 1.