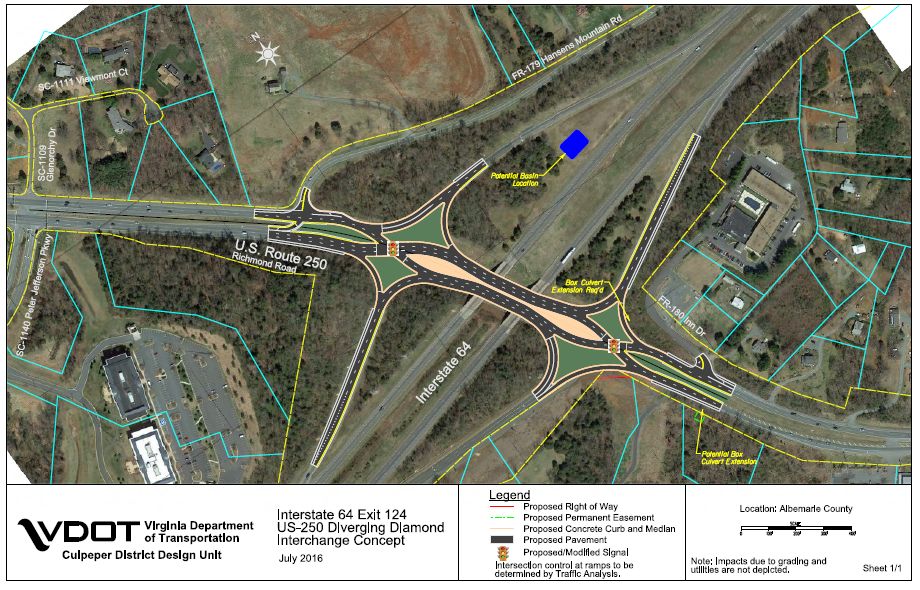 Several new transportation projects in Albemarle County can move forward now that the Commonwealth Transportation Board has adopted its latest multiyear plan.

At a meeting in Richmond this week, the CTB adopted an $18.6 billion, six-year program for road, bridge, rail and transit projects. That includes two roundabouts in Albemarle, a small connector road near Hollymead Town Center and the reconstruction of one of Interstate 64’s interchanges.

The General Assembly passed legislation in 2014 that requires new transportation projects to go through a prioritization process that is now known as Smart Scale. Submissions are scored according to how they address traffic congestion and improve safety, as well as other factors, such as how they promote economic development.

This is the second round of Smart Scale programs and the first time Albemarle has had projects qualify through the process.

The biggest project in the county is an $18.4 million reconstruction of I-64’s Exit 124 at Shadwell to convert it into a “diverging diamond” similar to the one at Zion Crossroads.

“The divergent diamond on U.S. 250 will eliminate left turns, improving safety,” reads a description of the project on the Smart Scale website. “This low-cost retrofit will improve congestion on what is one of the more congested corridors in the Charlottesville-Albemarle [Metropolitan Policy Organization].”

A roundabout will be constructed at the intersection of Route 151 and U.S. 250 to replace a temporary traffic signal that was installed in the spring. That project has a cost estimate of $5.8 million.

There also will be a new road that will connect Berkmar Drive Extended with Rio Mills Road. This connection will be a fifth of a mile long and has a cost estimate of $3.8 million.

The intersection of Proffit Road and Route 20 will get a $4 million upgrade.

A new merge lane from westbound I-64 onto northbound U.S. 29 and Fontaine Avenue also has been approved at a cost estimate of $2.9 million.

McDermott said all of the projects should be under construction within six years.

Albemarle had submitted three other projects that did not get funded. One will move forward anyway while planning will advance for the other two.

One is a roundabout at the eastern intersection of U.S. 250 and Route 240 at Mechums Trestle. McDermott said the project is being funded in part by proceeds from fines from people who break Virginia’s open container law.

“That can begin design within the next fiscal year that begins on July 1,” McDermott said. “That will probably take approximately a year. If there’s some right of way, I think we can expect that to take a year or two and maybe go to construction within approximately three years.”

A plan to connect Berkmar Drive Extended to Airport Road fell just short of qualifying but McDermott said the goal of eventually connecting to the University of Virginia Research Park can increase the economic development score for a future Smart Scale application. He added that the Virginia Department of Transportation is working with the county to move the project forward.

“Once we found out it wasn’t going to get funded, we went to VDOT and explained how important it was,” McDermott said. “They allowed us to move some funding into a new project to begin planning for that full Meeting Street, Lewis and Clark and Berkmar connection.”

McDermott said a roundabout on U.S. 250 in Crozet near the Blue Ridge Shopping Center did not get funded, but a mid-block crossing for pedestrians is being planned there instead.

“That includes narrowing the lanes out there so it will do traffic calming and will provide that pedestrian safety,” McDermott said. “We consider that project to be advancing even though we didn’t get Smart Scale funding.”

The only Albemarle project that is not moving forward is one to increase capacity at Free Bridge, including a second span for cyclists and pedestrians only.

In a previous round of Smart Scale funding, Charlottesville received nearly $30 million for streetscape projects for East High Street, Emmet Street and Fontaine Avenue. The city is in the process of hiring someone to oversee the projects.

This time around, Charlottesville was only successful in receiving $8.6 million for intersection improvements at Barracks Road and Emmet Street. The city had asked for $18.6 million to help fund the $30 million streetscape for West Main Street but the project did not qualify.

The City Council has set aside $10 million in the capital improvement program for the project.

“We will be exploring other potential funding options,” said Alexander Ikefuna, the city’s director of neighborhood development services. “With the lack of Smart Scale funding, we will have to … implement it in phases.”

Applications for the next Smart Scale round will not be accepted until 2018. That will give time for VDOT to tweak the system and for localities to take more time to think about what they want to submit.