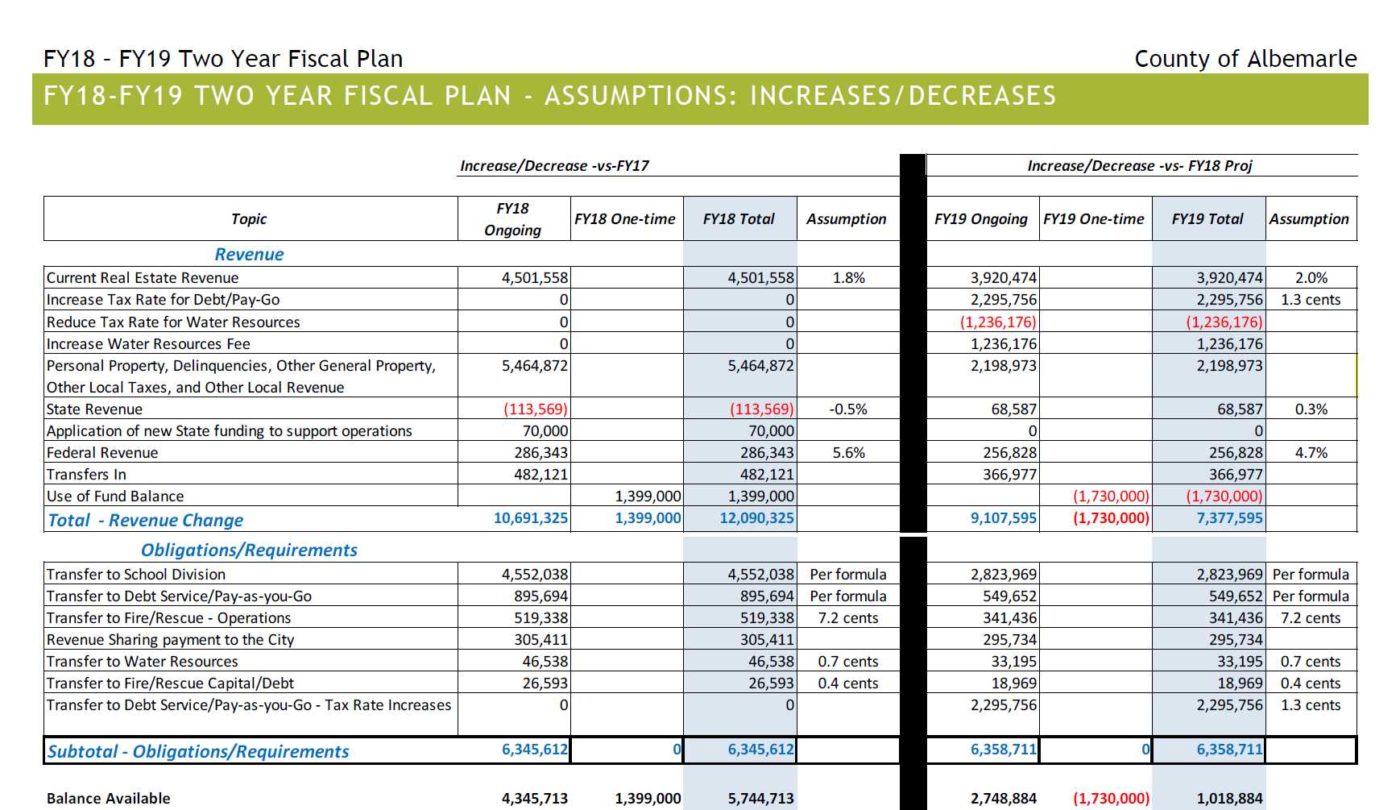 Albemarle County budget staffers have made a preliminary recommendation that there be no new real estate tax rate increase for the next fiscal year, but an increase would be proposed for fiscal year 2019.

“We are feeling cautiously optimistic about our revenues but we recognize there could be some changes ahead,” said Lori Allshouse, Albemarle’s budget director.

Allshouse briefed the Board of Supervisors on Thursday on a balanced two-year financial plan based on current projections. That also included a discussion of how to use an $8.6 million surplus caused in part by a 2-cent real estate tax rate increase in the current fiscal year.

County Executive Tom Foley will not present his recommended budget to supervisors until early next year but said Albemarle uses a long-range fiscal planning process to project long-term trends.

“I think every local government is in a position where they need to start transforming not to just be cheap and keep things down to the lowest level of service but really so that you free up resources and put them to your highest priority,” Foley said. “There’s a lot going on here about not having our head in the sand but trying to be a leader in how we retool the government to get to the highest priority.”

The plan assumes a 1.3-cent increase in the real estate tax rate for fiscal year 2019. However, that year also assumes supervisors will approve implementation of a stormwater utility fee that would raise $1.24 million in revenue.  As part of that vote, the portion of the tax rate currently set aside to pay for water protection would be reduced by 0.7 cents.

Supervisors reaffirmed their support for such a fee to help pay for additional costs that come with mandates to reduce pollution that reaches the Chesapeake Bay.

The county has proposed a 10-year improvement program that would be paid by property owners based on the amount of impervious surfaces on their land.

“We don’t see that the increases overall in revenue will increase at the pace we saw this year,” she said.

Allshouse said she is watching state revenues that are transferred to localities. The plan currently shows a slight reduction in funding from the state but the number could shift as Virginia’s budget projections are finalized.

Supervisor Rick Randolph said the board made the right decision earlier this year when it did not increase the real estate tax rate to the amount that had been advertised.

“The numbers indicate that the board was justified in cutting back the proposed fiscal year tax increase from 2.5 cents to 2 cents,” Randolph said. “Even at 2 cents, we ended up with a significant surplus this year.”

The county currently projects a fund balance of $8.6 million, but that number could change as the financial report awaits a final audit in December.

“[The fund balance is] providing us with some opportunities for some one-time money for some strategic investment,” Allshouse said.

Among them are a one-time infusion of $3.5 million to the capital improvement program, $630,000 for a new economic development fund and $250,000 for the county’s Acquisition of Conservation Easements program.

Other uses are $500,000 for temporary positions in various county departments, $100,000 for supervisor priorities and $275,000 for “transformational initiatives” such as better record-keeping in the county.

Foley said another of the one-time uses of money suggested in the plan would be to spend $320,000 on neighborhood revitalization. He said that could be applied toward a suggestion from Supervisor Brad Sheffield that it could be targeted toward improvements in the county’s growth area.

“In the urban ring area I think we are still struggling with identifying what improvements actually are needed,” Sheffield said. He suggested that neighborhood-level plans could be created before it is decided where the revenue-sharing projects might go.

One possibility is that the county’s community advisory committees could weigh in on how that money could be spent.

Final decisions on the use of the surplus will be made at a later date.

The plan also gives a glimpse into the next five-year capital improvement program, including $43.75 million to renovate or relocate the county court system. Supervisors will be further briefed on the courts at a meeting Dec. 14.

The plan also projects staff increases, including two planners who will be hired in the current fiscal year.

In fiscal year 2018, the plan calls for hiring an assistant county attorney, two additional police officers, a crime analyst and other positions.

In fiscal year 2019, the plan calls for converting a part-time assistant attorney in the commonwealth’s attorney office to full-time, as well as a “diversity inclusion generalist’ and two more police officers.

One member of the public at Thursday’s meeting suggested the county should be cautious in using a two-year budgeting process.

“Real life is not as predictable as the model that is being presented here today, and things over time can change,” said John Martin, of the White Hall District.

Supervisor Ann H. Mallek said the two-year plan is a living document and is not set in stone.

“I like that we’re looking ahead more than just one budget because it helps us to make a better choice,” she said.