Albemarle will remove ‘Johnny Reb’ statue Sept. 12, officials yet to decide where it will go 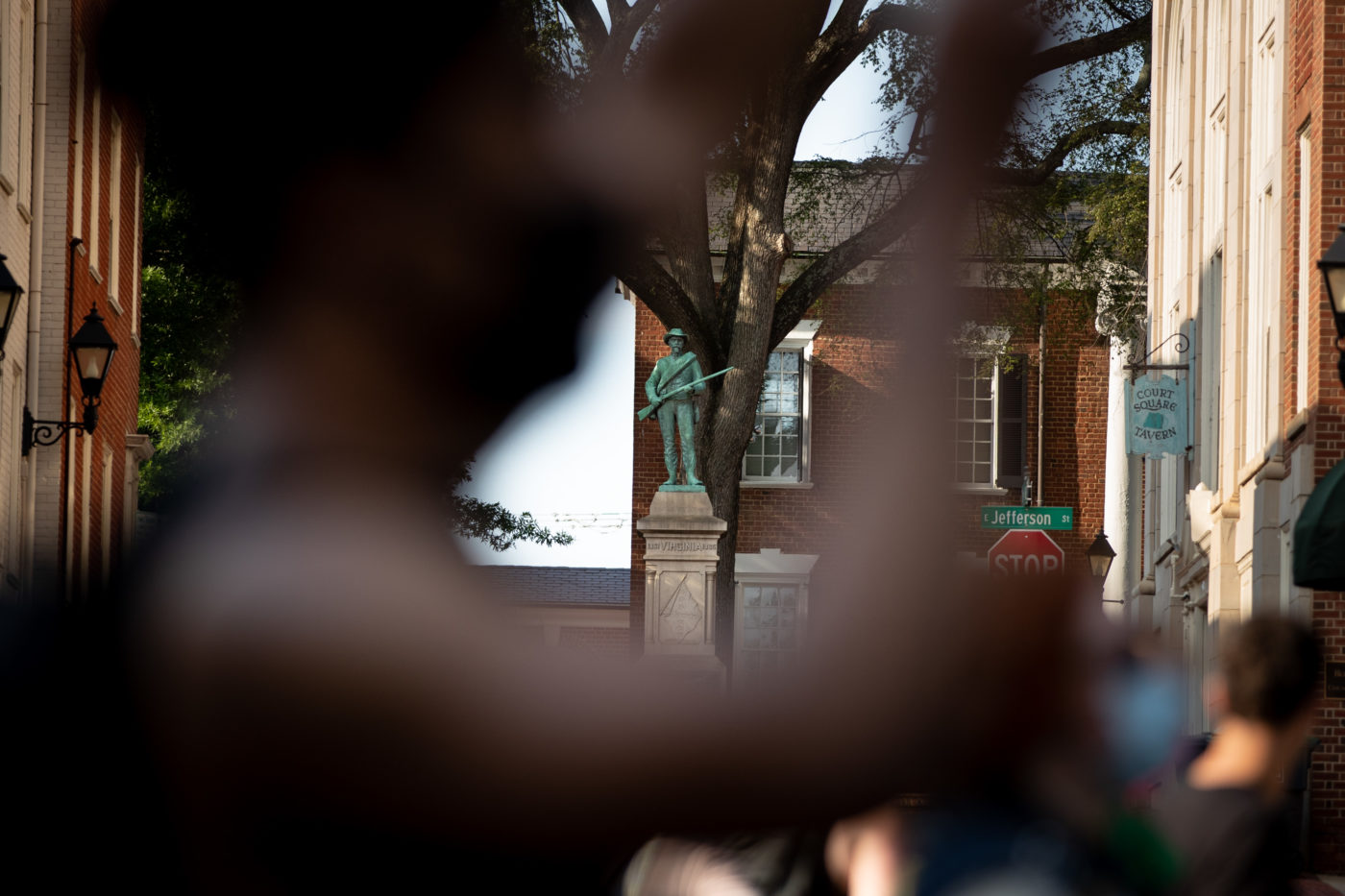 A group of demonstrators march past Albemarle County's Johnny Reb statue on June 21, 2020.

This article has been updated to include the individuals and organizations that have made offers as of Sep. 3, 2020.

Albemarle County announced it plans to remove its ‘Johnny Reb’ statue and cannons from the front of the county courthouse on Sept. 12.

The board of supervisors have yet to decide who it will give the statue to. The new law that grants localities authority over what to do with their Confederate monuments — which took effect in July — requires local governments accept offers from museums, historical societies, governments and battlefields.

County spokesperson Emily Kilroy says that the board hasn’t officially selected an offer yet because the offer window is still legally open until Sep. 5, per the state law requiring a 30-day offering period following a vote for removal. The board will select from a pool of offerors to take pieces of or all of the statues in a special meeting on Sep. 8.

Kilroy also says the selection could be more than one organization or group as the tableau consists of the Johnny Reb statue, cannons, cannonballs, and the base that Johnny Reb sits on.

“Not everyone wants everything so it could be one offer, it could be a combo of two,” she explained. “Some folks are not necessarily interested in the base because it has inscriptions local to Charlottesville and Albemarle. Depending on the group or geographic location, they may not want the base.”

Though offers are still being accepted until Sep. 5, the county shared a list of individuals and organizations that have expressed interest in the statues. Offers include

As county supervisors have already voted for removal, whatever is not taken from offering parties will still be removed on Sep. 12, Kilroy said.

Due to local ordinances restricting public gatherings of more than 50 people to curb the spread of COVID-19 and the nature of the removal being akin to a construction site, the county has opted to livestream the event rather than invite a crowd to look on in person, Kilroy said.

“It’s going to be like the olympics where when there’s action, cameras are going to be placed to have the best view,” Kilroy said. “When there’s not a lot of action, we’re interviewing a lot of people in the community who have subject matter expertise. It’s going to be a rich experience if you’re watching from home.”

At the public hearing where the board voted for removal last month, many speakers noted the time frame when the statue was erected. The Johnny Reb statue, which also bears a Confederate flag inscribed on its base, was erected shortly following the Reconstruction era and during the time of Jim Crow laws.

It was paid for by the Albemarle County, Charlottesville, and the United Daughters of the Confederacy. As the statue is not of a prominent Confederate figure, but rather a representation of a confederate soldier, it has been colloquially referred to as Johnny Reb. Johnny Reb as a symbol came to represent the common Confederate soldier.

Meanwhile, blocks away, Charlottesville’s statues of Confederate Gens. Robert E. Lee and Thomas “Stonewall” Jackson can’t be removed or relocated just yet, as they are still bound by an injunction that has yet to be lifted, according to the City of Charlottesville.

The Monument Fund, a group formed in 2016, sued the city to stop the removal, disturbance or damage of the Lee and Jackson monuments, saying it violated state law protecting them. A judge granted the injunction last year.

But with the new monuments law giving localities the right to remove them, in June, the Monuments Fund requested part of the injunction be dissolved.

Though the steps to remove the monuments are outlined by the legislation that passed earlier this year, Charlottesville Circuit Judge Richard Moore would still need to alter the injunction as the plaintiffs have requested before the City Council can begin its process, according to the city.

City spokesman Brian Wheeler said Thursday that there are no new updates.