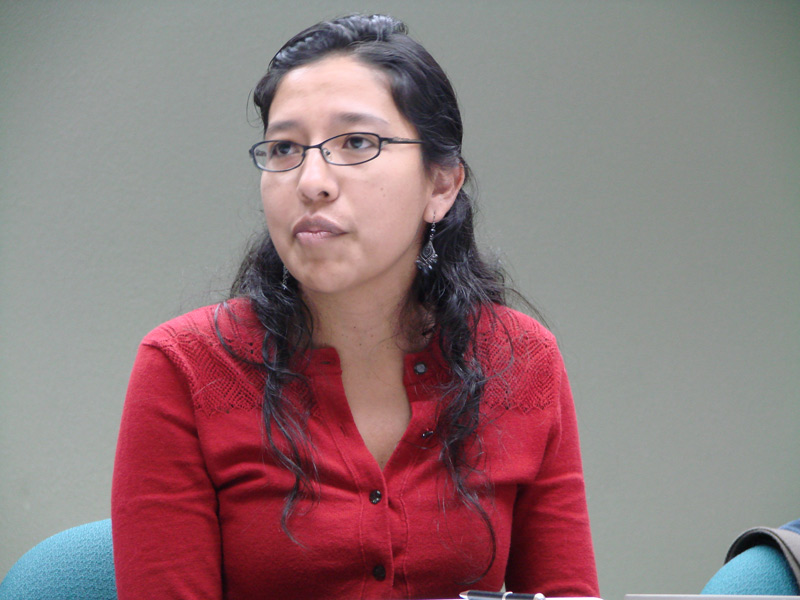 Gloria Gomez, a first grade teacher in Cale Elementary School's Spanish immersion program, spoke to the Albemarle School Board Thursday about the importance of bilingualism in the 21st century

In the coming years, the language you hear Albemarle County’s elementary school teachers speaking might not be limited to English.

While particulars such as the pace and scale of the program’s roll out, and which languages would be offered are yet to be determined, the Albemarle School Board Thursday showed initial support for the plan to teach the area’s youngest students in foreign languages and knows doing so would require hiring more bilingual teachers.

“Thomas Jefferson was multi-lingual and argued that doing so would keep our nation open to great ideas from around the world,” said Rusty Carlock, Albemarle’s international and ESOL program coordinator.

“And that’s even truer in today’s world,” Carlock added, citing the recent record-breaking initial public offering by Chinese company Alibaba Group, as well as the current international collaboration to fight Ebola in Africa.

Currently, Albemarle is piloting a Spanish immersion program at Cale Elementary School. In the program, students receive 50 percent of all classroom instruction in Spanish, which means they are learning Standards of Learning content in both the English and Spanish languages.

The initiative began in kindergarten, has expanded by one grade level each year and now includes the second grade.

Not all Cale students are enrolled in the full immersion program however, and those students receive what is called “pullout instruction,” which translates to 120 minutes of Spanish language teaching per week. These courses are not taught by the child’s classroom teacher, but the instruction is related to content the children learn in their home classrooms.

While the Board took no formal vote, they did support growing immersion, rather than pullout programs at the elementary schools. Full immersion programs, executive director of K-12 education Debbie Collins said, are ultimately cheaper to implement because a division only has to pay one teacher, rather than two.

Expanding Cale’s program to one other elementary school in the western and northern feeder patterns would come with a cost of $296,000, while doing so county-wide would cost $1.7 million.

Sarah Morgan, a kindergarten immersion teacher at Cale, said she has English-speaking students, who after only four weeks of instruction, are speaking complete sentences in Spanish.

Gloria Gomez, a first grade immersion teacher at Cale, said both the students and parents are fully engaged.

“At the most recent back-to-school night none of the parents complained about why they haven’t seen this or that at home,” Gomez said. “They were so engaged with what their kids are doing in school and were asking me if there was anything they could do to help.”

One of the work session’s goals was to define what a robust world languages program looked like. Carlock said good programs begin in preschool or kindergarten, they are reinforced with academic study throughout the child’s career and that they have a school-wide focus, meaning an elementary school chooses one language.

But the conversation did not come without questions.

School Board member Pam Moynihan wanted to know if there are students who don’t succeed under the model.

“There might be some, but most do well,” Cale principal Dede Jones said. “And I’ve even been surprised by some of the children who I thought would really struggle.”

School Board member Kate Acuff asked if the division’s middle and high schools are prepared with courses for the coming wave of bilingual students.

Carlock said that it could cause scheduling difficulty at the middle and high school levels, but that there is time for the department of instruction to plan for those changes.

“If we do this, 20 years from now
these kids might go to college,
then come back and become teachers,”
Handrich said.

Which language or languages to teach also occupied Board members’ minds.

“I’m torn about implementing a standardized language across the board, or allowing the community to choose,” School Board chair Ned Gallaway said. “Do we need to contact the business community and see what their needs will be? We can’t just pull a language out of a hat.”

Board member Barbara Massie Mouly asked if the division would be able to attract enough bilingual teachers.

Jones said she shared that concern, but was surprised by how many quality applications Cale received.

“If we do this, 20 years from now these kids might go to college, then come back and become teachers,” Handrich said.

Schools officials said that some parents have expressed interest in a French or Mandarin Chinese immersion program, and that staff will develop a process to assess what language interests parents have.

Carlock did say, however, that many parents find it difficult to help their children with homework in a non-western language, given the extreme differences between eastern and western languages.

At present, the division offers French, German, Spanish and Japanese in high school, and French, German and Spanish in middle school.

When the current generation of young children arrives in secondary school, however, Moynihan said the students will have already learned English and a second language, and that immersion might not be necessary.

“What you need is a robust program in middle and high school, it doesn’t have to be immersion then because they’ve already had it at the elementary level,” Moynihan said. “They’re fluent in Spanish already, so you can encourage them to take Russian or French, for example, or tough courses that require high levels of a second language.”

Staff will return to the Board at a future meeting with more information for expanding a world languages immersion program at the County’s elementary schools.