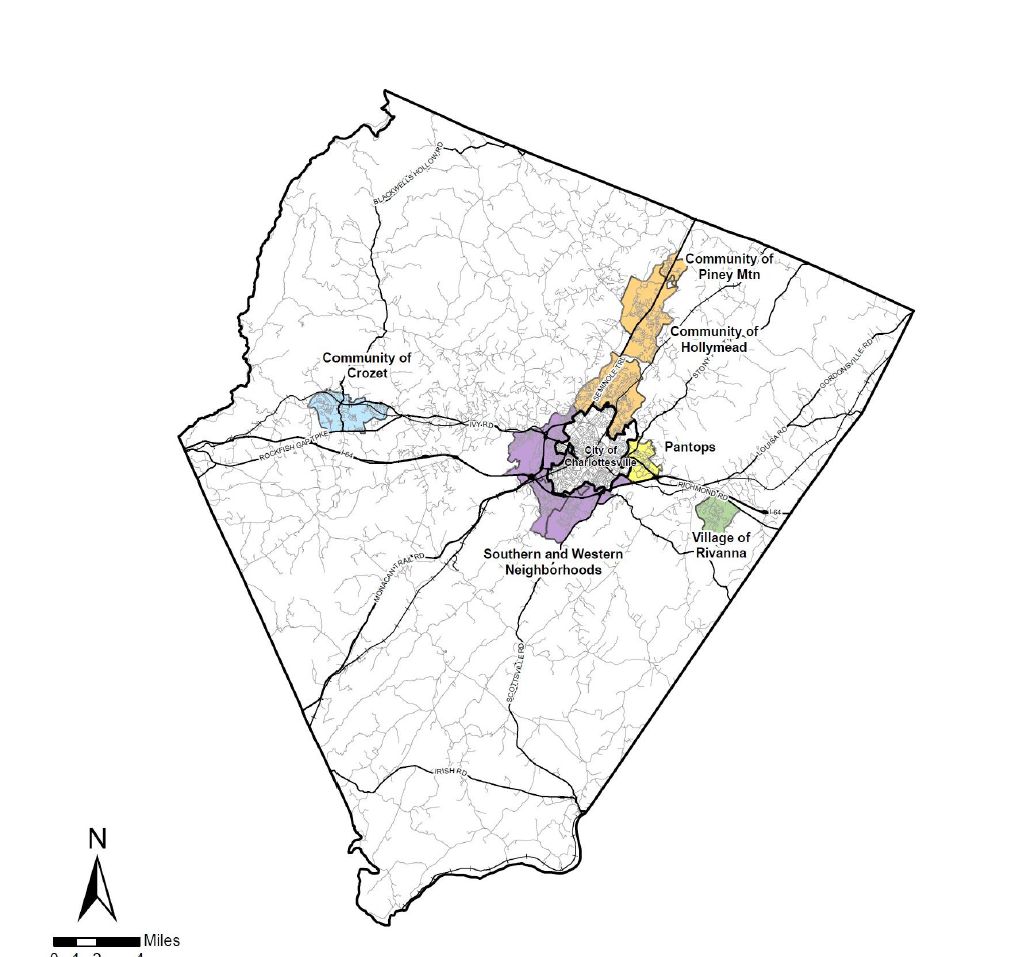 Members of the Albemarle Board of Supervisors turned their attention Tuesday to policies that encourage dense development in the county’s urban areas and questioned whether they are working.

“We say we want people to live in the urban area,” said Supervisor Diantha McKeel. “And yet I’m not sure that the folks that live in the development area feel like they get the services they need.”

Albemarle’s Comprehensive Plan has been under review since the spring of 2011. Chapter eight of the draft plan sets out the objectives and strategies to concentrate growth in the county’s designated growth areas.

“Charlottesville and Albemarle County will support neighborhoods and places that allow residents to live, work, and play near their homes and where attention to the character of new development and redevelopment enhances quality of life,” reads one of the chapter’s objectives.

Several growth areas have master plans that are intended to help achieve the vision, but one supervisor isn’t sure they have been effective.

The county adopted a zoning district known as the “neighborhood model” in 2001 to create communities with sidewalks, interconnected streets, parks and attractive buildings for an urban feel.

However, McKeel said many of her constituents are on Charlottesville Area Transit routes, but there are no safe ways to walk to the bus stops.

Boyd agreed. He said U.S. 29 and U.S. 250 are both barriers to creating the walkable communities called for in the plan and that hurts the county’s allure toward younger generations of homeowners who want to walk or bike to work.

“We have to concentrate on how we make these pedestrian-friendly areas,” Boyd said.

Boyd said many people prefer to live in communities that were created in the 1990s — before the neighborhood model was adopted.

“Forest Lakes has cul-de-sacs and it has things people want and things they want to have,” Boyd said.

Wayne Cilimberg, the county’s planning director, said that before the neighborhood model was adopted, developers were not required to help contribute to infrastructure.

“When there were rezonings, they were very limited in terms of specifying expectations,” Cilimberg said.

McKeel said she was concerned that older neighborhoods suffer when new development comes along.

“There’s always concern when the neighborhood model butts up against existing neighborhoods,” McKeel said. “All of a sudden there are changing dynamics in the older neighborhood. It doesn’t always mesh, certainly when you’re talking about the urban ring close to the city.”

Elaine Echols, the county’s principal planner, acknowledged the process is not always easy.

“We talk about ways to try and mitigate those impacts,” Echols said. “When we’re reviewing something, we look to find ways to apply the neighborhood model without having a stark difference with the property next door.”

County Executive Thomas C. Foley said there are not always resources to upgrade the infrastructure in existing neighborhoods. He said the county may need to update the way it prioritizes sidewalk construction and maintenance, but that funding will be an issue.

“It’s part of the challenge we’ve been talking about with capital funding,” Foley said.

The adopted capital improvement budget for the current fiscal year contains no money to implement any of the master plans. A five-year financial forecast shown to supervisors earlier this month depicts that trend continuing.

“For those places that don’t have specific master plans, we have to have some language about the creation of dynamic areas where we can do placemaking,” Dittmar said.

Supervisor Brad Sheffield said he would like to see the Places29 Master Plan area be split into two. He said that might speed up its review process when the time comes.

“I really do think we are in a new era of the development area,” Sheffield said. “Without a doubt, I think things are going to move faster and faster and we need to get ahead of it.”

The population of Albemarle is projected to be 134,196 in 2030. The plan assumes nearly 15,000 additional dwelling units will need to be in place to absorb that growth.

The supervisors’ monthly review of the plan will continue in December when they are expected to take up chapters on transportation and parks. Echols said she is hoping the plan will go to a public hearing in April.

“We will take as much comment as people want,” Dittmar said. “I think that we should not err on the side of too little.”