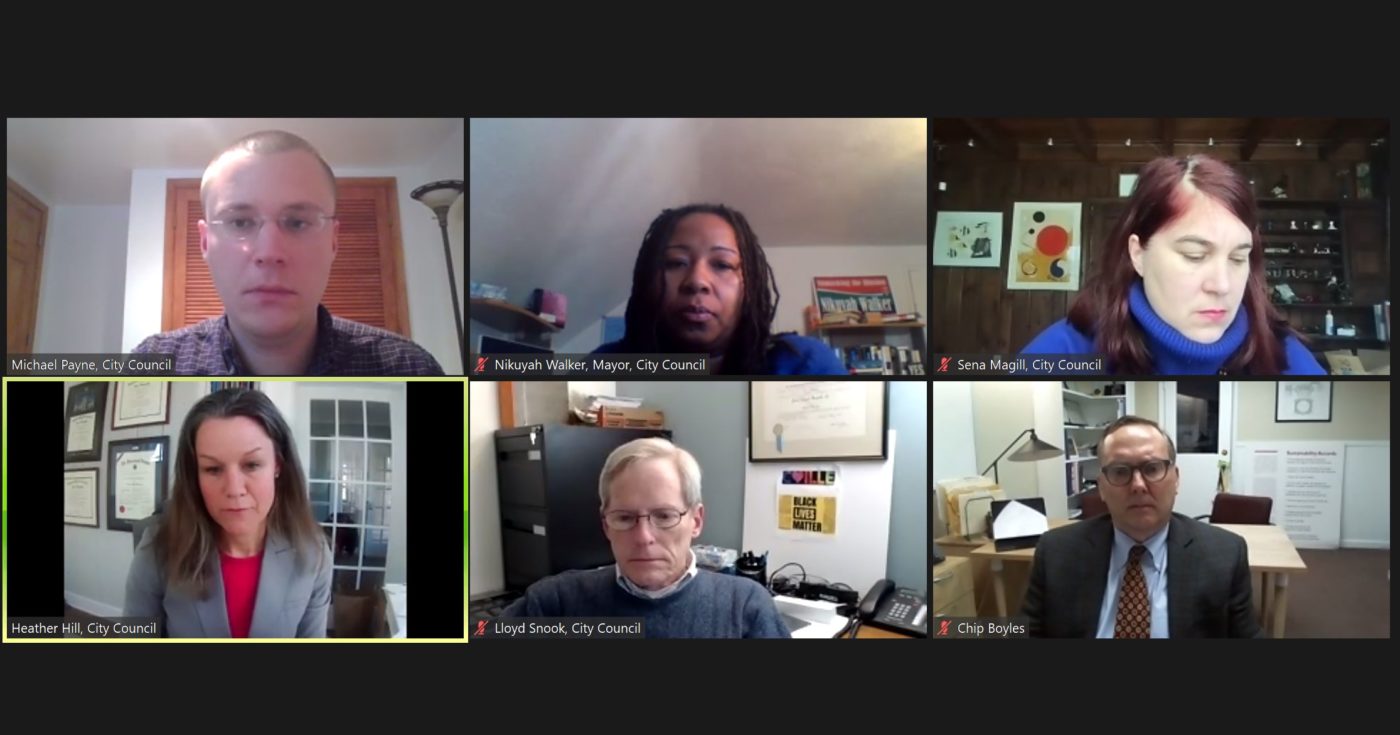 After halting its planned national search for a new city manager, and following over 15 hours of closed-door meetings and council member infighting, the Charlottesville City Council without community engagement looked across the Downtown Mall to select Chip Boyles to lead the city.

However, Mayor Nikuyah Walker said the council plans to further explain its reasoning at the next City Council meeting on Jan. 19 — and that Boyles’ selection will not be how business is conducted.

“We also are aware that the public will have a lot of questions about this process — why it was handled in this manner and what a future process will look like,” Walker said. “We are hoping to answer some of those questions at the next council meeting.”

Announcements for the previous closed meetings also gave indication that for matters concerning the expenditures of a city manager search and contract, a private discussion is best for the city.

During the hourlong press conference Thursday afternoon, the council explained that in its current leadership crisis, solving the leadership component of the problem was best handled in the closed meetings this time.

In the conference, the council not only formally announced that Boyles, the executive director of the Thomas Jefferson Planning District Commission, will step into the role of Charlottesville’s top position, but added that City Attorney and current interim City Manager John Blair has accepted a city attorney position in Staunton and that the council plans to work collaboratively with Boyles to stabilize the current “leadership crisis” and owns its role in both the issue and solutions.

While not calling Boyles an interim city manager, the council also announced plans to conduct a national search for a more permanent city manager by 2022.

Boyles has headed TJPDC since 2014. The planning district commission, headquartered on East Water Street less than 600 feet from City Hall, serves Charlottesville and Albemarle, Fluvanna, Greene, Louisa and Nelson counties. As someone familiar with Charlottesville for some time, council members unanimously praised his capabilities and willingness to “step up” for the city.

Boyles also has previous governance experience as a town manager in Maryland and a city manager in South Carolina.

While the council reiterated his previous experience and longtime service to the Charlottesville community and surrounding areas as reasons they hired him, Walker also noted his “neutral” and “thorough” nature along with his communication skills — things she witnessed through her involvement as a council member stakeholder in TJPDC.

Ahead of the 5-0 vote to officially appoint him as the next City Manager, each council member explained how Boyle’s résumé and attitude can help bolster efforts to stabilize local government.

On priorities, he aims to help fill the numerous high-level vacancies that include three deputy city managers and a director of Neighborhood Development Services.

Though he will not be referred to as “interim” in his service as City Manager, Boyles’ appointment is not meant to be permanent.

Council members explained that Boyles’ long-term, yet temporary filing of the vacant executive position will help the city to immediately begin stabilizing itself.

Councilor Lloyd Snook noted how the fallout from the Unite the Right rally in August 2017 has been the “bell that keeps ringing,” in terms of government instability and a desire for the city to “move forward.”

Between interim and more concrete city manager roles, Charlottesville has seen turnover in recent years along with an exodus of substantial city staff members. Upon his appointment, Boyles is set to be the fifth City Manager in the past 3½ years.

In thanking Boyles, Walker said that she hopes he can help balance the instability. She and Councilor Heather Hill noted the recent violent mob that stormed the U.S. Capitol last week — featuring white supremacists and neo-Nazis — yet again propelling Charlottesville back into national headlines.

“We need a stable organization so that we can meet the needs of our citizens. As we keep bringing up — and Charlottesville has been brought up a lot since the terrorist attacks in [Washington] D.C. — I think we don’t even understand how we will never be able to shift from that until we actually put some things in place and heal from what many of us knew long before 2017.”

Walker thanked Boyles for knowing the challenges he will face in taking the new position.

“… [K]nowing this is not going to be a walk in the park, stepping into it, I really appreciate your willingness to do that,” she said.

“I’m appreciative that you are entrusting me with this very important responsibility and the importance of it at this particular time — when leadership and solidarity is so needed in Charlottesville … across our entire nation,” Boyles said in response to council members’ welcoming messages to him.

In a call with Charlottesville Tomorrow, he stated that TJPDC’s chief operating officer, Christine Jacobs, will step into his role as interim executive director, adding that the organization is not pressed to find a more permanent replacement right away.

“We [TJPDC]  are in very solid financial condition. We have a lot of positive projects going on,” Boyles said. “I think it’s going to be really important to them to access where we are right now prior to them rushing out and beginning a search.”

In looking forward to working with the council and city staff, Boyles and council members noted his experience thinking regionally at TJPDC is something that he can bring to his new position as he helps stabilize things internally.

At numerous times during the conference Walker, along with councilor Michael Payne, reiterated that council also must internally reflect on its role in local government instability.

Consistent with conversations Payne has had with Charlottesville Tomorrow in the past week, he noted that council will have to set and maintain clear expectations and boundaries for its relationship amongst itself and with city staff.

The appointment of Boyles stems from the recent halting of a nationwide search for a city manager, recent council infighting on social media, continued departures in city staff and several closed-door meetings — of which council made their choice for the position.

In halting their initial search for the city’s executive, council members cited feedback from the consulting firm, Ralph Andersen & Associates, as a “wake up call” for the state of local government. The firm had claimed that attracting a new manager would be a challenge as they may not feel supported in their role.

The city has paid the firm $5,000 for its services to date, and as of this week, the contract had not been closed. During the conference, Hill confirmed that the city will not be working with the firm anymore. With a pending election for Hill’s and Walker’s seats later this year, the makeup of the council could change by the time a consulting firm is needed for the next national search.

Meanwhile, Walker assured members of the media and any public listening to the conference that the unusual nature of Boyles’ selection will not set a precedent for how the community’s top executive is hired. She noted that Boyles is welcome to formally apply when the time comes, and his actions as the current city manager will certainly factor into possible re-selection.

“We were not elected to make decisions behind closed doors,” Walker explained. “We understand it is important to make this decision with you. We are only here because of you all.”