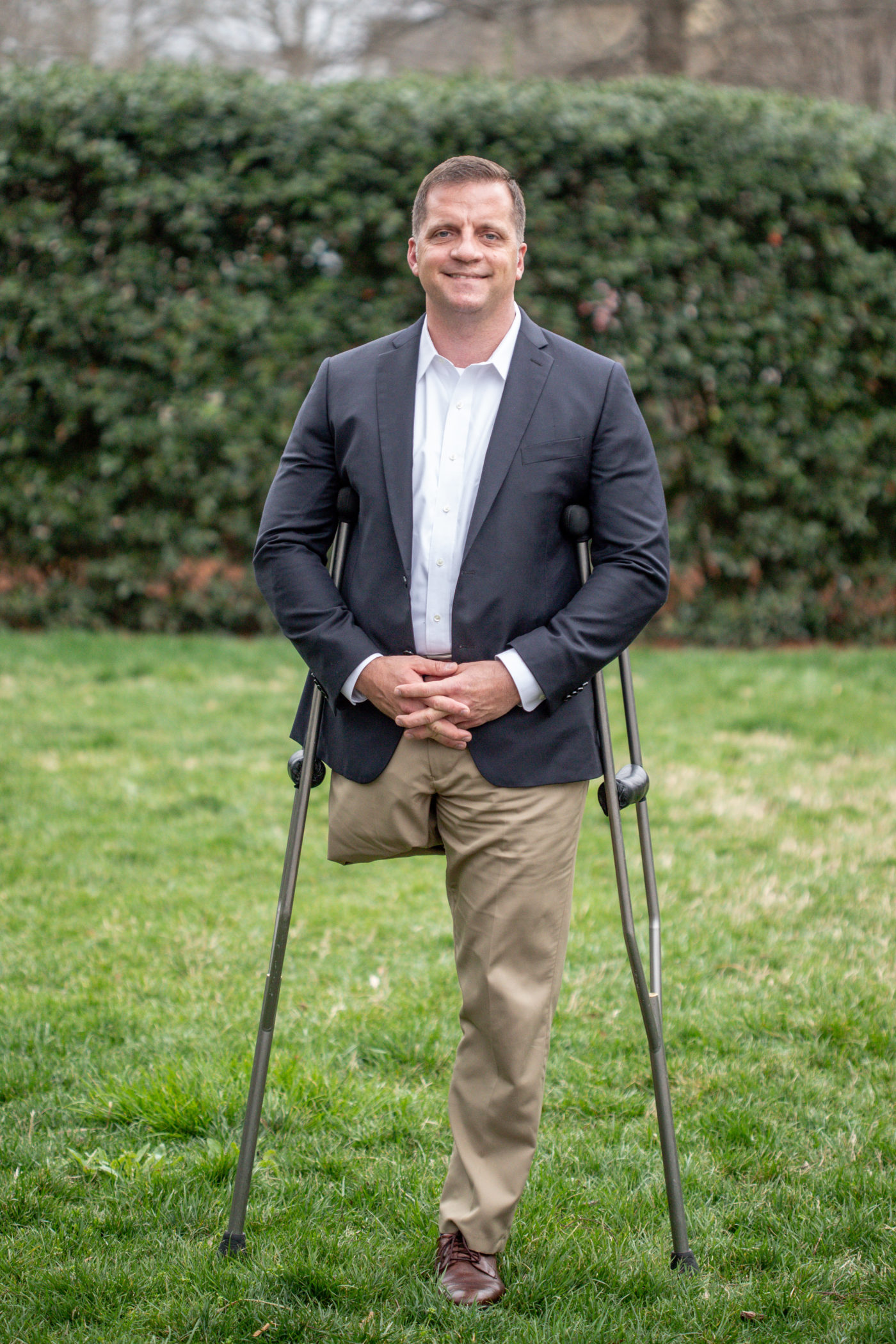 In seeking to unseat Sen. Mark Warner, Gade says his varied experience — all tied to public service — has prepared him for the position.

“It’s all directly applicable. I view this campaign at least in part as a job interview. If you’re applying for a job, you need to have skills to do the work or the boss shouldn’t hire you,” Gade said. “The boss is the people of Virginia. They can look at me and say, ‘Does he have the intellect, policy work, temperament?’”

After graduating from West Point in 1997, Gade served in multiple locations until a combat injury in Iraq resulted in his leg being amputated. Instead of being honorably discharged from the Army, he asked how he could continue military service — eventually serving on veterans and disability policy committees for Presidents George W. Bush, Barack Obama and Donald Trump before his retirement in 2017. He has also taught at West Point and currently teaches economics at American University.

“It’s almost like I’ve accidentally been placed in a series of positions that have directly prepared me to represent the people of Virginia in the U.S. Senate.”

A strong economy is a core component of Gade’s campaign.

“If we can go to zero base budgeting … it means that every agency has to justify its budget every year instead of just building off the previous baseline,” Gade explained.

“It’s almost like I’ve accidentally been placed in a series of positions that have directly prepared me to represent the people of Virginia in the U.S. Senate.”

If elected, Gade wants to trim taxes and reform regulatory practices where possible in order to streamline processes and bolster the economy.

“We clearly need fundamental reform to our entire tax code,” Gade said.  “The closer we can get to a flat, understandable tax, or a very simplified tax code that people can understand and explain to each other, the more fair it will be.”

Gade plans to introduce legislation called the Stop Insider Trading Act, which would require members of Congress to place their investment portfolio in a trust when taking office. The legislation would also prohibit senators and representatives from using information received in their official duties for personal benefit. The plans come as some senators have attempted to profit from privileged information related to the coronavirus. Most recently, Sen. Richard Burr, R-N.C., resigned from his position as chair of the Senate Intelligence Committee — which is co-chaired by Warner.

As the legislative, judicial and executive branches of government are each meant to have a series of checks and balances, Gade has taken issue with presidential overreach of Congressional authority.

Earlier in 2020, after President Trump ordered an airstrike that killed commander Quasim Soleimani amidst growing tensions between the U.S. and Iran, Democratic Virginia Sen. Tim Kaine introduced the Iran War Powers Act. It gained bipartisan support before ultimately being vetoed by Trump in March. While Gade feels Kaine’s legislation was an “attempt to embarrass Trump” he supports the notion of congressional approval being needed for war actions or declarations.

Concerning wars, Gade has ideas for how to support the armed services while lessening their involvement abroad.

“What keeps us out of conflict and out of shooting wars, is the ability to win shooting wars. To win decisively, we need a strong national defense,” Gade said.

While supporting the military is a prominent component to his campaign, Gade believes he is a bit of an outlier in the Republican party for a few reasons.

“I am a proponent of getting out of Iraq and Afghanistan as soon as possible. Unless those engagements are authorized by congress directly, they are unconstitutional in my view,” Gade explained. “We should concentrate on our core national interest instead of playing terrorist whack-a-mole around the globe.”

To create a stronger national defense, Gade suggests a focus on growth of the U.S. Navy.

“The Navy is the one that is fully engaged at all times,” Gade said. “The Army, Marine Corps and Air Force are a little less so. The Navy has responsibility for ensuring national commerce and keeping seas safe.”

In his free time the Alexandria native likes to stay active, regularly mountain biking and doing CrossFit, as well as having competed in a paratriathlon.

Gade is the Republican candidate for U.S. Senate. Election day is Nov. 3.