An hour with… RD Huffstetler 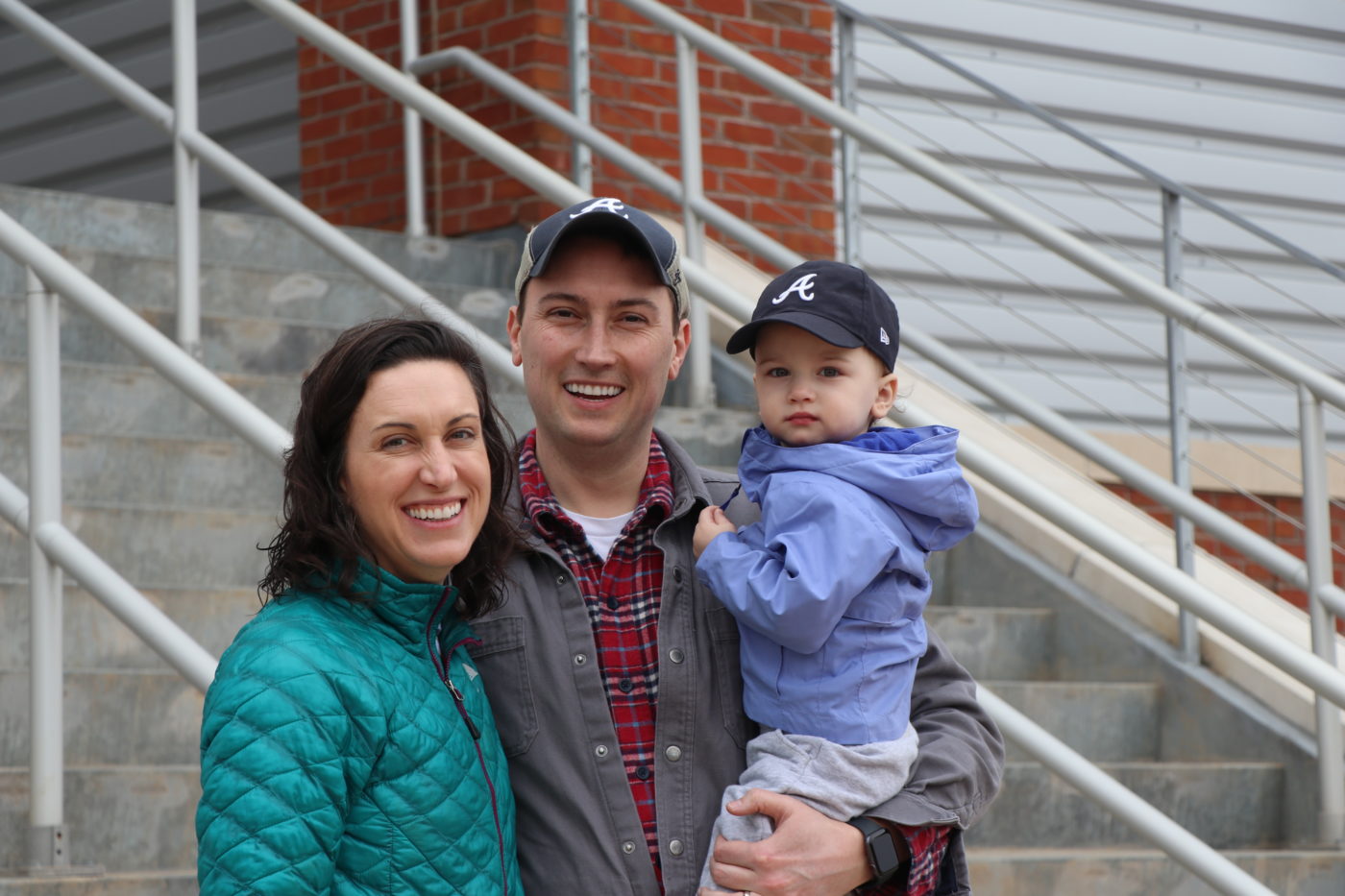 RD Huffstetler and his wife Emily chose the Charlottesville/Albemarle area to raise their daughter.

For his conversation with Charlottesville Tomorrow, 5th Congressional District candidate Roger Dean “RD” Huffstetler chose to meet at Davenport Field at Disharoon Park, the University of Virginia’s baseball field. The sport is special to him and his family, as many generations have grown up playing it.

“Baseball is something that connects all sorts of communities, which is part of what I like about it,” he said. “Even though we have all these differences in our country right now, sports can sometimes be a unifying factor.”

As the geographically largest congressional district in Virginia, the 5th spans a variety of localities with different primary concerns that need addressed from its representative.

“I like to say the most conservative person in America and the most liberal person in America both live in the 5th District of Virginia,” Huffstetler said. “The idea that we can represent them in Congress is a challenging one, but one that I think is worthy of the honor of trying to seek this office … to try to bring a sense of public service that even if someone doesn’t vote for us, we still try to represent them.”

“We” is a word that surfaced often during the conversation, as Huffstetler often referred to his team of campaign staffers when talking about issues he will address if elected. Like baseball, Huffstetler takes a team viewpoint when working on his campaign and lifting up others.

Huffstetler previously ran for this seat — now occupied by Republican Rep. Denver Riggleman — in 2018. He then spent much of 2019 engaged in local and state races throughout the district, showing up to other candidates’ events or canvassing for them.

On the issues he would like to tackle in Congress, Huffstetler said he has taken note of the vast district’s main concerns. He sees healthcare, infrastructure and clean energy as the primary platforms for his campaign. He also has plans to address criminal justice reform and opioid addiction.

“Here in Charlottesville and Albemarle [County], you hear a lot of things like criminal justice reform and affordable housing, and that’s why we are going to launch plans to tackle those issues,” Huffstetler said.

“Then you go to other parts of the district,” he added.

Huffstetler said he knows someone in Charlotte County whose healthcare premiums are very high and also noted how much of Buckingham County lacks broadband access.

“What we’ve got to try to do in this district is try to focus on those types of issues that make people’s lives better, that lift them up and give them the same sense of opportunity that I had in this country.”

Originally from North Carolina, where he helped on his grandparent’s farm, his family later spent time in Georgia when Huffstetler’s father worked in auto plants. Growing up, Huffstetler became the first person in his family to graduate from college, and he did so through scholarships.

“The reason we’re doing this is that’s the same experience we want every American to have,” Huffstetler said. “Throughout my whole life, there have been people who’ve given me a hand up.”

He referenced a teacher in high school who pushed him to boost his grades and the lasting influence of that.

He used those scholarships to attend University of West Georgia before joining the Marines and deploying to Iraq and Afghanistan. Afterwards, he used the GI Bill to attend Harvard Business School and Harvard Kennedy School of Government.  Huffstetler went on to work in the private sector where he co-founded an app. He also spent time working as chief of staff for former U.S. presidential candidate and Rep. Seth Mouton, D-Mass. Locally, he has also been an advisor for the annual Tom Tom Founders Festival.

Having lived in rural and urban areas throughout his life, Huffstetler and his wife, Emily, were attracted to the Charlottesville area for the union of the two.

As for addressing opioids, Huffstetler said he has a personal connection to the impact of addiction. His father died at age 49 of an oxycontin overdose.

“I want addiction to be treated like a disease,” he said. “I don’t think we need to siphon it off or make it something different. It needs to be covered under every [healthcare] plan.”

Huffstetler calls lack of internet access “the kind of disparity that is going to hold schoolchildren back to be able to get a job in the changing economy.” To enhance rural broadband access, he suggests partnering with telecommunication companies and working with the various co-ops in the district.

Another education policy proposal he and his team have involves a pipeline from school to employment, especially in local industries.

“A thing that we want to work on in our office– assuming we can win– is we want a bill called Community College Industry Partnerships,” Huffstetler said. “What these do is they bring together the local commerce with the folks that are involved in the local community colleges.”

Another aspect of the bill pertains to an issue felt most strongly in the southern parts of the district: retaining populations through the workforce.

“They make sure we are giving degrees that give jobs,” Huffstetler said. “We call this idea — between infrastructure and education — ‘Dream Job, Hometown.’ The biggest issue you’re going to hear in Southside Virginia is ‘Why do all our kids have to move away? Why can’t we have good jobs here?’”

Huffstetler also noted that the 5th District has a lot of green energy jobs and fast-growing green energy companies in Charlottesville.

“What we need to do is be that convener-in-chief to bring together those fast-growing companies in Charlottesville with the rest of Southside,” Huffstetler said. “They have relatively cheap land where we can put solar and wind farms and source carbon-neutral energy for our small cities. A place like Charlottesville is working very hard to get to carbon-neutrality as fast as it can, and there’s no reason that we can’t work with some of our famers in the countryside to help make that happen.”

Huffstetler says that the plans for criminal justice reform should be publicly available soon and that his team supports a lot of ideas that Hingeley had during his campaign like eliminating cash bail. If elected, Huffstetler also plans to take a look at where he can help build on the First Step Act, which passed Congress with bipartisan support.

Huffstetler was a democratic candidate to represent Virginia’s 5th Congressional District. He lost in the primary.