An hour with … Rep. Denver Riggleman 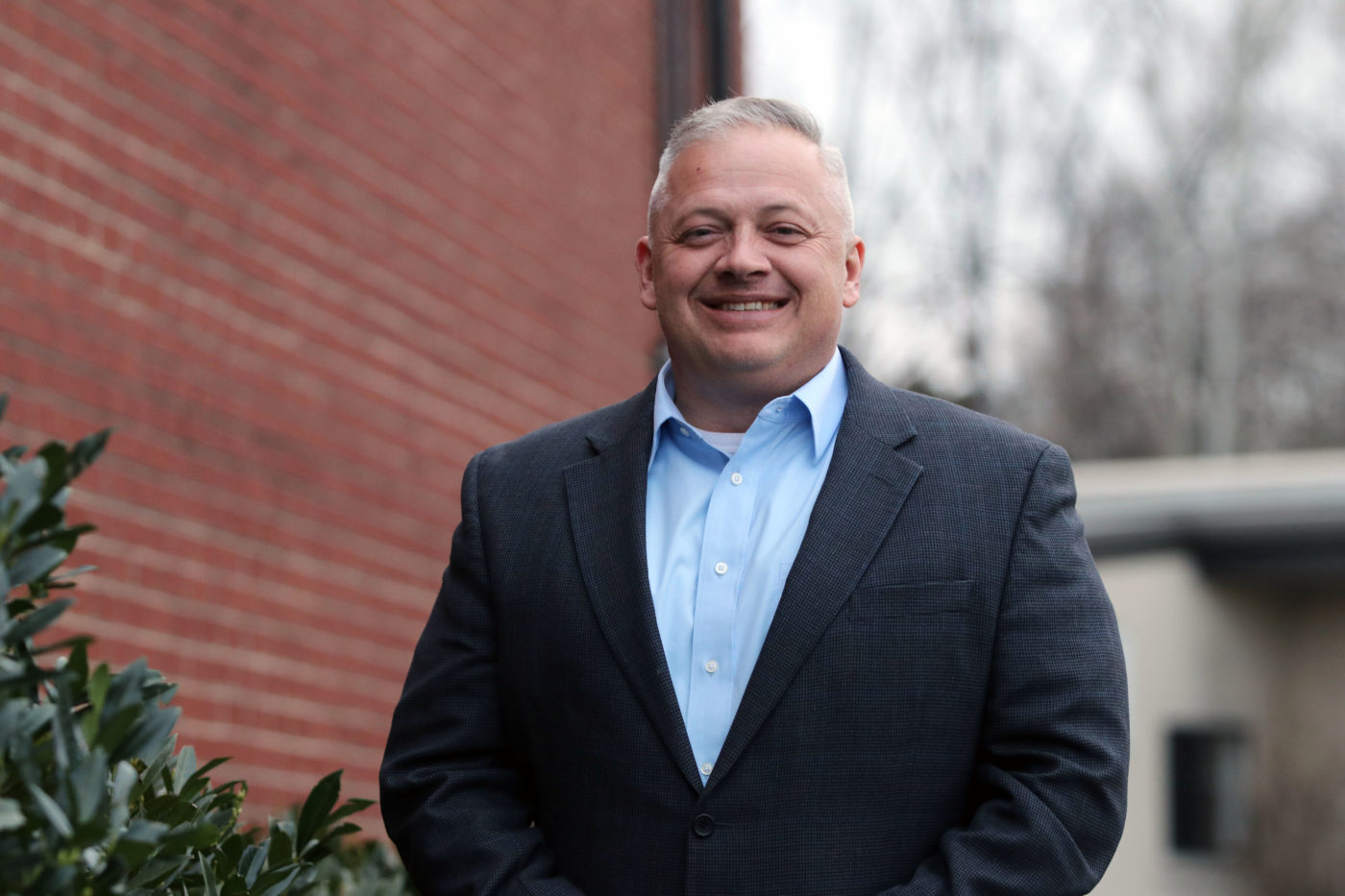 U.S. Representative Denver poses for a photo after grabbing coffee with Charlottesville Tomorrow.

“I didn’t really get involved in politics,” said Denver Riggleman, the incumbent Republican representative for Virginia’s 5th Congressional District now vying for a second term. “Politics got involved with me.”

He cited the experience of starting a distillery with his wife as part of his political awakening and engagement.

“I saw that the government really had control over every single process we were doing,” he said. “We had a four-year legal battle, and when I tried to do business with the state government, I found out that it seemed like lobbyists had a lot more effect on votes on laws than people.”

Frustrated, Riggleman saw an opportunity to get involved on behalf of others, as well. Having served in the military and operated security companies, Riggleman said serving others has always been a calling.

“Service is in my DNA, and I saw so many people I thought were being wronged,” Riggleman said. “I wanted to make sure that I served again.”

In between campaign stops on a January afternoon, the sitting congressman met with Charlottesville Tomorrow for coffee, where he reflected on lessons learned from his first year in office and his favorite places in the 5th District.

“I think there are incremental improvements that we can make to the [Affordable Care Act], Riggleman said. “There’s been a lot of issues, not only with premiums rising, but it’s very hard to get healthcare in rural areas. Some of the things I have proposed are telehealth and telemedicine, but even things like taking pre-existing conditions, moving them from the ACA and switching those to [the Health Insurance Portability and Accessibility Act].”

He also cited the Opportunity Zones created through the Trump administration’s Tax Cuts & Jobs Act as something that can be built upon.

“We’re looking at something called the Go Act, or the Gigabit Opportunity Act, where people who invest in these zones would sort of have the baseline where they can do the same thing as the Opportunity Zones where they get advantages for investing in those specific areas.”

Opportunity Zones are designated areas where certain investments in low-income areas can have tax advantages. There are two in the city of Charlottesville and two in Albemarle County.

As a representative, it’s the rural areas of the district that Riggleman said he keeps a strong focus on.

On rural housing, Riggleman said he wants to take away regulations so people can loan other people money without “getting bogged down in bank regulations.” Riggleman serves in Congress’s Financial Services Committee.

“I put forth a bill where rural housing loans in general are easier to get for those in manufactured housing or low-income housing,” Riggleman said. “If we do multiple things in tandem, we can help the economy, and the reason I want to do that is that we have such a disparity in some counties when it comes to unemployment and median family income.”

Riggleman also supports the hemp industry, which can produce fabrics, fiberboard and paper.

“Once you get a baseline where people can pull themselves up by their own bootstraps — you’re sort of seeing that in hemp — that could be hundreds of millions of dollars for the 5th District,” he said.  “We’re the leading tobacco district in the commonwealth, so we can just utilize those resources, go right into hemp and we can do some incredible things to make sure that farmers have a future going forward.”

Additionally, Riggleman said he supports decriminalizing marijuana possession. Although several states have legalized it for medicinal or recreational purposes, it is still classified as a Schedule I drug federally, meaning it is illegal.

Riggleman is a proponent of the Safe Banking Act, which will allow states to bank marijuana industries as long as it’s legal in that state. Currently, banks risk federal punishment for serving the industry.

“If we [pass the Safe Banking Act], we can take out some of the criminal activities and criminal issues that we have with illicit finance,” Riggleman said. “Even while it’s legal in some of these states, federally, it’s illegal.”

Riggleman also has been a part of legislation that would allow states to determine the schedule of marijuana themselves.  He also presented a bill that would preserve the ability for someone on medical marijuana to keep guns they may own.

As various gun-related legislation make their way through Virginia’s General Assembly in this session, Riggleman said he thinks much of it is unnecessary.

“At this point, we have a lot of laws on the books,” he said. “I think this is way too far when it comes to the Second Amendment. If I were in the state legislature, I wouldn’t support any of the anti-Second Amendment bills that are there right now.”

Having served in the U.S. Air Force with a focus on cybersecurity and then operating and owning security companies as a civilian, Riggleman said his background in those sectors helps his bills be very technical.

“I think that’s why I was able to get a bill passed through the House as a Republican, because my bills are incredibly technical,” Riggleman said. “I would say that right now, me not being in politics has been the best thing for me going forward to being in politics now, because I have real-world experience that I can utilize in these bill packages.”

Riggleman has also collaborated with Democrat counterparts on bipartisan issues like rural broadband expansion with Rep. Abigail Spanberger, D-7th, and presently, he and Elaine Luria, D-2, for the Nuclear Energy Leadership Act.

On climate resiliency, Riggleman noted how the once-partisan issue has increasingly become bipartisan, with efforts to enhance renewable energies.

While he said he supports free market solutions, he also said that government incentivizing renewables “in a way that makes sense is a good way to go.”

“It’s not just giving out grants willy-nilly, it’s leveraging stuff like the rural utility service underneath [U.S. Department of Agriculture],” Riggleman said, referencing the broadband loans he helped secure over the summer.

“But we also need to make sure that innovation isn’t stifled, so that means if there is any government regulation that is hurting renewable energy and giving advantage to other types of energies, like Dominion [Energy], we’ve got to take that away,” Riggleman said.

“I think we need to deregulate what people can use for trades, which in the 5th District is pretty huge,” Riggleman said. “We’re looking at ensuring that we can use those programs for colleges, we should be able to use those same programs for trades.”

On opening Silverback Distillery in Afton, Riggleman said it was spearheaded by his wife. After selling a counterterrorism company in 2012, he took his wife and daughters on a trip to Scotland and then consulted his wife for their next move.

“At that point, I told my wife, ‘You’ve been with me since we were 19 years old, I want to follow you now,’” Riggleman said. “Now, I was a little bit surprised, but she’s Scottish and Irish, so I shouldn’t be surprised. So, she goes, ‘I want to make liquor.’”

In choosing Nelson County, the Rigglemans wanted to remain close to Charlottesville and the University of Virginia — of which Denver is an alumus. Another special place for him is Carter Mountain, where he has taken his daughters.

“I remember taking our kids there when they were very young,” Riggleman said. “But as I’ve been up and down the district from Fauquier to Danville, there’s probably a hundred different places that are meaningful to me.”

In his spare time, he enjoys weekend brunch dates with his wife, fishing on his property, and taking their dogs on walks.

“It’s become a more complex life because of Congress, but when I’m with my wife and kids, I really just want to relax and be with them,” Riggleman said.

“A lot of times, it’s Netflix and bourbon.”

Riggleman was the incumbent and a republican candidate for Virginia’s 5th Congressional district. He lost in a convention.