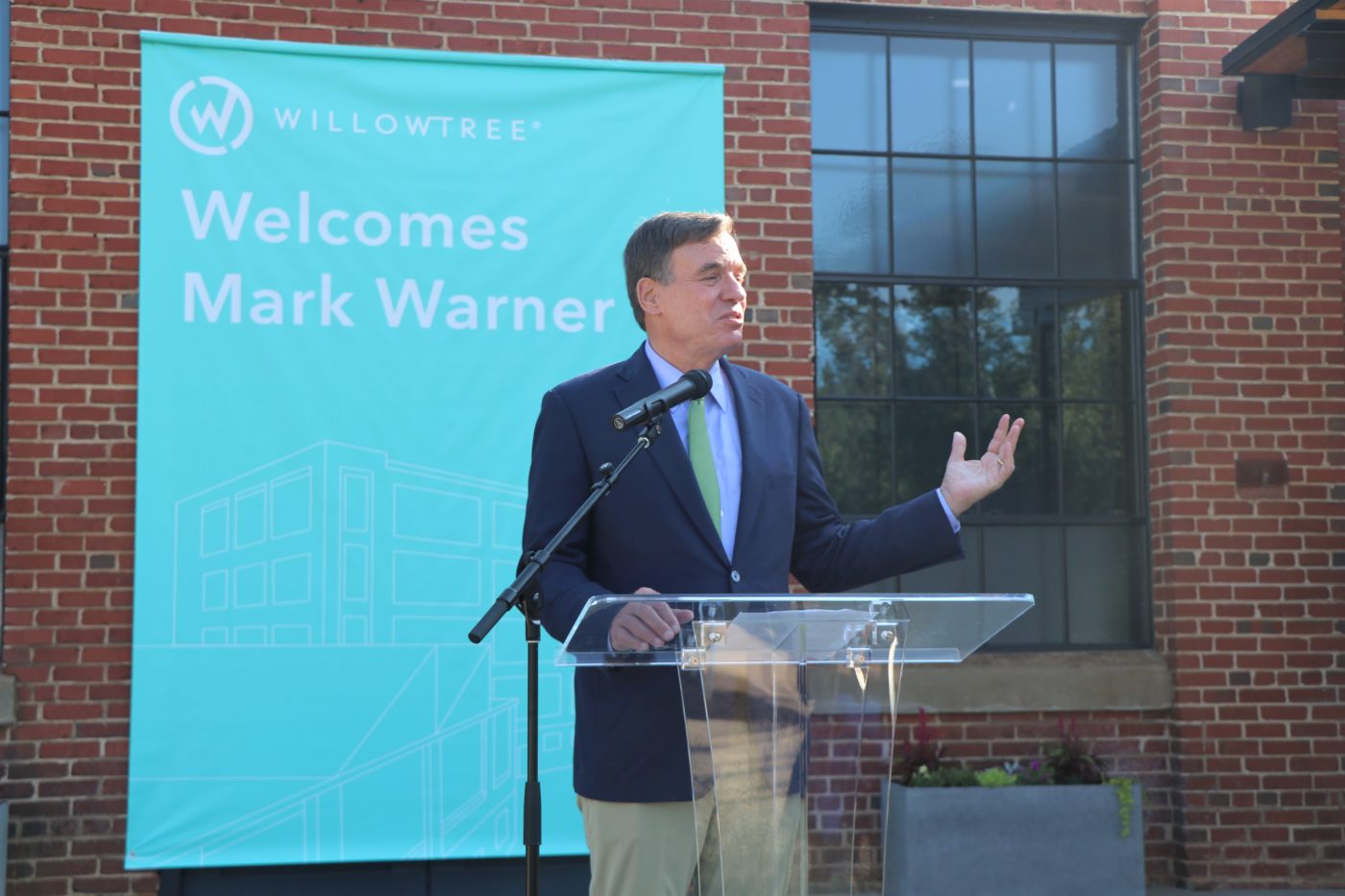 In a politically purple state, longtime senator Mark Warner is hoping his bipartisan track record will help him win a third term representing Virginia in the U.S. Senate.

Amidst the COVID-19 pandemic, a lot of campaigns have had to pivot to more online outreach along with social distancing measures and lower capacity when attending events around the state. As the incumbent candidate, Warner has been involved in recent and forthcoming relief packages from Congress and also served as a member of President Donald Trump’s economic reopening panel. With the Senate in recess in late August, Warner dropped by Charlottesville for a series of socially-distant campaign events where Charlottesville Tomorrow was in attendance and also received a 20 minute one-on-one interview.

“It’s been the honor of my lifetime to be governor and now senator in Virginia,” Warner said. “I’m really proud of the results I’ve produced for Virginia.”

He listed his efforts to bolster funding for national parks and work to protect people with preexisting conditions in the Affordable Care Act. Throughout Warner’s tenure in Congress, he often joined or cosponsored legislation with republican senators and currently serves as vice chair of the Senate Intelligence Committee.

“I think I’ve built a record of both delivery for the people of Virginia but still the ability to work with people on both sides of the aisle,” he said of his bipartisan work.

“Even the fact that I’m not a fan of Donald Trump, the fact that he picked me to be on his economic reopening panel shows that I’ve got respect from both sides of the aisle. In a time when so many people are so partisan, I think having that ability is really important. If the people of Virginia hire me again, I commit to even do more.”

On how the democrat senator manages to frequently collaborate with republicans, Warner says forging relationships and establishing trust has been crucial.

“My view has always been that politics is part policy and part building personal relationships,” he explained.

Warner was governor of Virginia from 2002 to 2006, at a time he says its general assembly was majority republican. The experience helped him polish an ability to bring different legislators together on issues, he said.

“When I was governor, the legislature was two-to-one republican, so the only way you were going to get something done was if you built trust. With a lot of my republican partners, I’ve built friendships,” Warner said.  “If you can trust someone, it doesn’t mean you’ve always got to agree with them, but you trust them enough.”Warner says he was helpful in garnering support as Congress passed the Paycheck Protection Program this past spring to aid small businesses facing hardship due to COVID-19.

“I think I’ve built a record of both delivery for the people of Virginia but still the ability to work with people on both sides of the aisle."

Warner, a venture capitalist, reflected on his first failed attempts at starting a career in the 1980s before founding Columbia Capital and investing in technology companies.

“I realize that if I had not been a white man with an Ivy league degree, I wouldn’t have gotten a third shot, I wouldn’t have gotten a second shot. I might not have even gotten a first shot,” Warner said. “I think one of the things that COVID has really exposed on every level are the enormous disparities that we still face in this nation, even in a place as progressive and forward leaning as Charlottesville.”

Warner says inspiration for the Jobs and Neighborhood Investment Act stems from the failures of the Paycheck Protection Program where some Black-owned or Latino-owned businesses “did not get their fair share” as many minority-owned businesses continue to struggle or shutdown nationwide at higher rates than white-owned ones.

According to Warner, republican legislators are signing onto his bill and he is confident it could be included in the next round of COVID stimulus that Congress passes.

“We’ve taken 18 billion dollars that have already been appropriated — so we’re not spending new money — we’re taking money that went into one of the facilities in CARES [Act] that didn’t get used and saying, ‘let’s take this money, and not just over short periods of time, but structurally change the access to capital in this country.’”

As Warner’s co-chair of the Intelligence committee has stepped down and is under investigation for insider trading, bipartisan legislation has emerged in the House that would require legislators to place investments in a blind trust during their tenure — and is also a proposal from Warner’s republican opponent, Daniel Gade. Meanwhile, Warner says his stocks have been independently managed and placed in a trust since he first took office as governor nearly two decades ago.

“I would welcome any of these folks doing the same thing,” Warner said.

Meanwhile, as people have lost work from the pandemic, Warner wants to provide additional assistance to the Consolidated Omnibus Reconciliation Act (COBRA) which provides short term healthcare coverage after job loss. Warner also wants the Federal government to be able to negotiate drug prices to help bring down the costs.

Amidst a spate of nationwide demonstrations calling for criminal justice reform, Warner is also signed onto a bill with Sen. Harris that would ban no-knock warrants and chokeholds, mandate racial and bias training, as well as help local and state governments ensure body cameras are worn.

“You ought to be measured by what you get done. Too many people in politics will tell you what they’re against but they’re not very good at telling you what they’ve gotten done,” Warner said. “I hope I’ve been able to have a record where I can say to the people of Virginia ‘let me take you area by area where I’ve got things done.’”

Mark Warner is the Democrat candidate for U.S. Senate. Election day is Nov. 3.