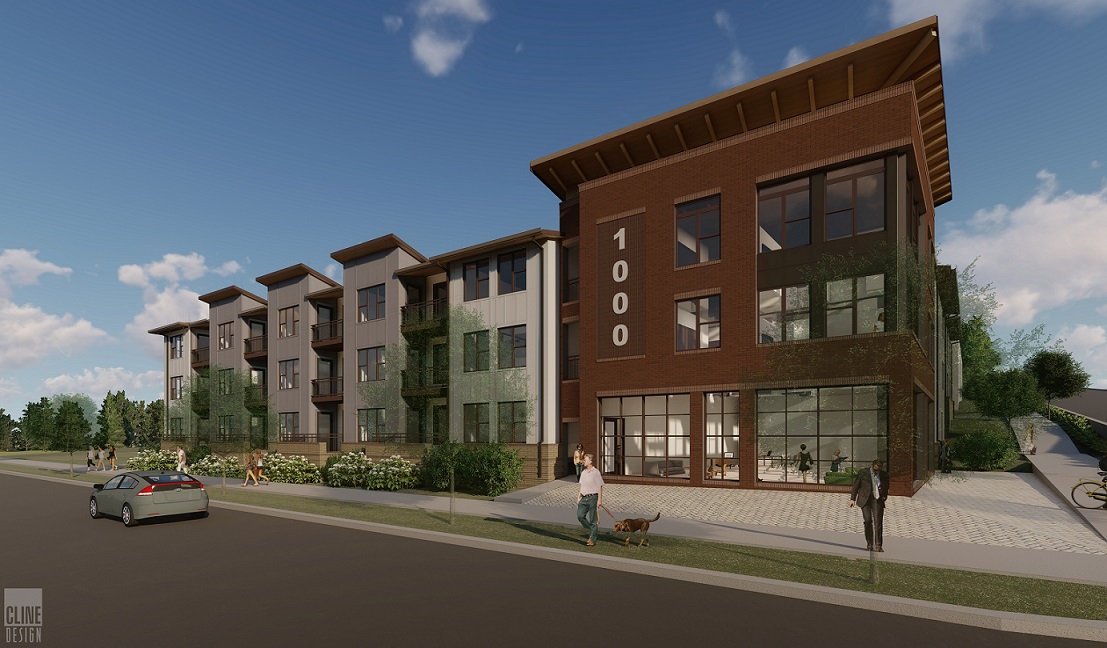 A 45-unit apartment complex has been proposed for a 2.2-acre parcel at 901 River Road in Charlottesville.

After a failed attempt to build a self-storage facility near Pantops, a North Carolina real estate investment firm is looking to construct an apartment complex at the same site.

A site plan submitted to the city of Charlottesville by Go Store It River LLC in June shows a three-story apartment building with 45 one-bedroom and studio units at 901 River Road. Justin Shimp, of Shimp Engineering, designed the plan.

The proposal also includes a warehouse for a wholesale auto parts business on the opposite side of the 2.2-acre parcel. The warehouse would have four floors and a footprint of 15,965 square feet.

The site plan outlines 84 parking spaces, with 45 allotted to residents of the apartment complex. A small office building currently on the property would be demolished.

The property is zoned as an Industrial Corridor, allowing the proposed development to be built without a special-use permit from the City Council.

“They are allowed to do this, per our city code,” planner Heather Newmyer said at a site plan conference on Wednesday. “When we have suggestions [from residents], the developer doesn’t always have to take them.”

Go Store It is an affiliate of Madison Capital Group, based in Charlotte, North Carolina. In 2017, the company sought a special-use permit request to build a three-story self-storage facility at 901 River Road. The proposal included 5,600 square feet of retail and office space.

In May, the Go Store It River LLC withdrew the SUP request for the self-storage facility after the city Planning Commission in March unanimously recommended its denial. Commissioners expressed a desire for a different use that would generate more economic activity.

The Planning Commission previously recommended denial for the self-storage facility in October.

City planner Brian Haluska attended the site plan review for 901 River Road as a resident of the Locust Grove neighborhood. He said the proposed apartments would be met with high demand from young professionals working in Charlottesville.

“In our rental market, those units would lease out before they are even built,” Haluska said.

“[The apartments] will be rented out for as much as the market will bear,” Shimp said. “They will be nice new units, and they probably will be pretty expensive.”

Locust Grove resident Diane Blake said she was concerned about potential noise and traffic from the apartment complex and the auto warehouse. She said River Road and Belleview Avenue have become popular routes for commuters seeking connector roads between Rio Road and U.S. 250.

“It’s getting frustrating for those of us who live in the neighborhood,” Blake said.

Shimp noted that the original plan to build a self-storage facility on the property would have brought less traffic to those streets.

“We attempted, at a great expense, to build the most low-traffic use you could possibly build for this site,” Shimp said. “And we were rejected by the city twice because there wouldn’t be enough traffic.”

Kennon Williams, a landscape architect and city resident, said he was in favor of the planned apartments and other residential development along the Rivanna River.

“We have turned our back on the river for too long,” Williams said. “I think mixed-use [development] is how we protect the river, and I think it will be a huge benefit for the neighborhood.”

Shimp said Go Store It River LLC plans to begin construction on the property as soon as the site plan is approved and building permits are granted by city planning staff.