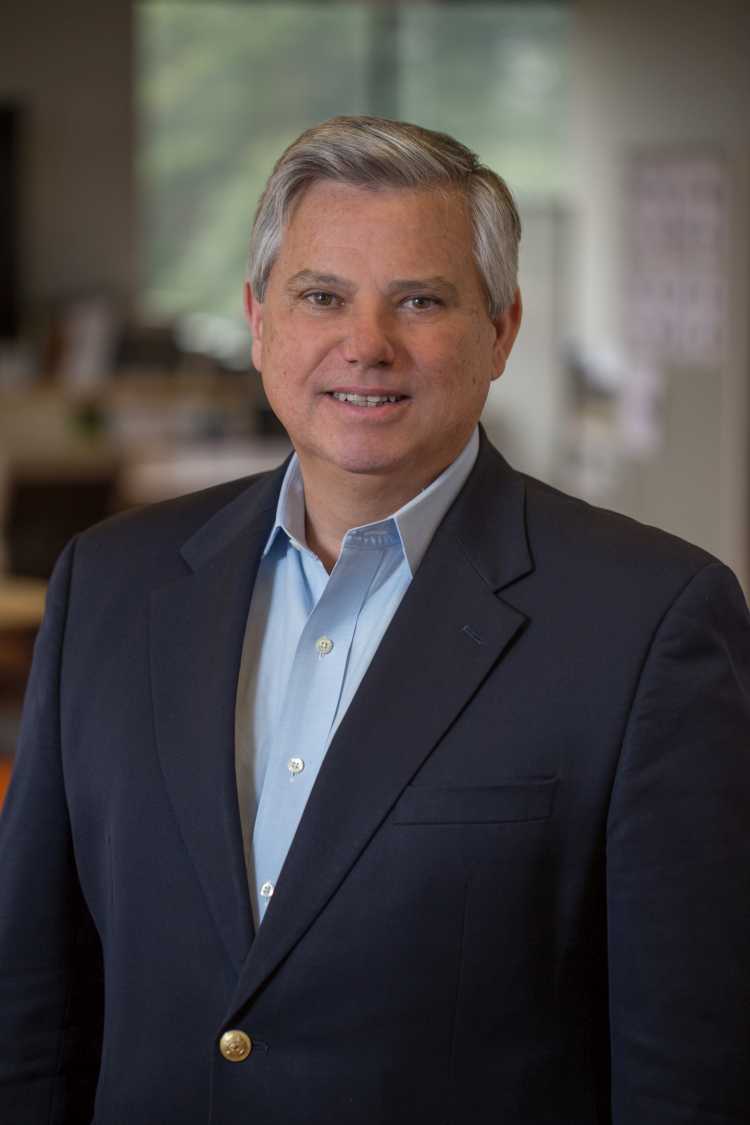 Jim Boyd, a partner with Grimm and Parker, will lead the design of the first phase of the Friendship Court redevelopment

The Piedmont Housing Alliance has spent the past 18 months developing a plan to quadruple the residential density at a redeveloped Friendship Court, and it has now hired an architectural firm with Charlottesville ties to create the first of several blueprints.

“Grimm and Parker’s work will be to create the footprint, [establish] typical unit types and do site plan work that will tie into the engineering to move forward with the city’s approval of the first phase,” said Karen Reifenberger, acting chief executive officer of the Piedmont Housing Alliance.

Friendship Court has been owned by the National Housing Trust and the Enterprise Preservation Corp. as a joint venture since 2002, but the Piedmont Housing Alliance is a minority partner that will exercise an option to buy the site outright late next year.

The 150-unit apartment complex was built as Garrett Square in 1978 following the urban renewal of the area south of downtown Charlottesville.

The nonprofit PHA announced in September 2015 that it would seek to redevelop the 11.75-acre property as a mixed-income neighborhood that would retain the Section 8 and low-income housing tax credits that keep those units affordable to existing residents.

“We anticipate that will be renewed as a matter of course, and we’re already in conversations with the [Virginia Housing Development Authority] and the U.S. Department of Housing and Urban Development about that process,” Riefenberger said.

The average annual household income for Friendship Court is $10,800, with most households led by a single parent. A mandate from the VHDA requires that all of these units be “affordable” through 2032.

The PHA has worked with residents to create a master plan with funding assistance from the city of Charlottesville, the Donovan Foundation and the VHDA. This process was overseen by former CEO Frank Grosch, who left the position in February.

“Frank was instrumental in shepherding the process to complete the master plan and to bring to life the vision that our board of directors, residents and key stakeholders have,” Reifenberger said. A new CEO is expected to be in place later this year.

The master plan from December states that at least 600 units need to be on the site to make the finances work out. That consists of the 150 low-income units, 80 units aimed for moderate incomes and 370 market-rate units. A draft of the plan released in June called for a total of 480 units, or just 250 market-rate units.

“The additional market-rate units are necessary to bear the cost of infrastructure and, most important, to allow for creation of the below-market affordable and workforce units,” states a section of the plan.

When the site is fully built out, the intention is to have income levels spread throughout the development.

An advisory committee made up of seven Friendship Court residents and six non-residents chose Grimm and Parker from four firms that were selected for interviews. The firm designed the Crozet Library and the new Louisa County High School, as well as a master plan for Piedmont Virginia Community College.

“When Grimm and Parker gave us their presentation, we saw buildings they designed for people with physical disabilities, for seniors and for members of a church,” Friendship Court resident Tamara Wright said in a news release. “Based on those projects, we decided the architects of Grimm and Parker will listen to us, the residents, throughout the redevelopment.”

Jim Boyd, a partner at Grimm and Parker, will oversee the first phase.

“The property is located at a critical transition between high-density commercial and low-density residential areas with diverse architectural styles,” Boyd said. “Phase 1 will primarily front single-family homes in the Belmont neighborhood and must be sensitive to the small scale and high level of detail in these existing structures.”

Boyd, who will be joined in the project with fellow Grimm and Parker partner Mel Thompson, said the first phase also will set the tone for how the rest of the site is redeveloped.

This first phase will see 150 new units built at the properties’ eastern corners on Sixth Street. Those spaces currently do not hold buildings, but a community garden created by the Urban Agricultural Collective of Charlottesville will be relocated elsewhere on the property.

“There is absolutely going to be green space on the final plan and what it exactly looks like will be worked out with the community,” Reifenberger said. “We have made a commitment to UACC. While the farm won’t exist in the current state because we have to prioritize housing for residents for non-displacement, it is mentioned several times in the master plan how important the gardens are to the community.”

The goal is to use these units to house others in the development as existing units are demolished to build future phases.

Grimm and Parker will work with Timmons Engineering to develop a site plan for the city’s review. Riefenberger said the goal is to get construction underway in 2019, with completion of the first phase in 2021.

The Friendship Court property is one of three major redevelopment sites within the city’s Strategic Investment Area, a 330-acre section of the city that is generally south of Charlottesville’s Downtown Mall.

The PHA and other developers will have to contend with a revision to the zoning code that will seek to create new development standards for areas currently in the city’s “downtown extended” district, but that likely will not occur until after the first phase is well underway.

“The goal is not to get the form-based code in before the PHA begins the first phase,” said Alexander Ikefuna, the city’s director of neighborhood development services. “The PHA has been working with the city and is well aware of the city’s goal of making changes to the code.”

Reifenberger said the Piedmont Housing Alliance just wants certainty so it can know what to expect as the master plan for Friendship Court is implemented.